India’s taxi app hailing war is heating up. This morning, details of Ola’s latest $310 million funding round surfaced, and just hours later, Uber has introduced its first service that allows cash payments in the country.

UberAuto is a new category for hailing auto rickshaws that is debuting in New Delhi. Uber said it is “a cash-only service for now,” with fares calculated using existing transport regulations.

The service works just like hailing any other kind of Uber vehicle (it’s much like the rickshaw service Ola runs too). Users open the app, select UberAuto from the options, and wait for a driver to confirm. Customers can hail autos even when there is no credit in their Paytm wallet — the payments service that Uber integrated in India — since the focus is on cash.

“When it comes to getting around Delhi, auto-rickshaws are a staple. We recognise the history and value of autos to the transportation landscape. For us, uberAUTO is another way of using technology to offer more choice, making life simpler and keep Delhi moving,” Uber said in a blog post.

Uber has been running its service in New Delhi under a ‘no profit model’ in the aftermath of the alleged rape of a passenger. UberAuto continues that approach, and passengers will not have to pay booking fees or a service charge on top of the fare. 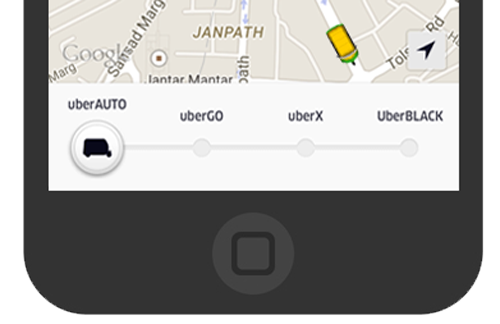 This service is an interesting addition for a couple of reasons.

Auto rickshaws are, as Uber said above, an important layer of the transportation ecosystem in India cities. They are the cheapest and most ubiquitous way to get from A to B — so, in that respect they compete with Uber’s service for passengers. Getting auto rickshaws on the Uber platform is a big win from that point of view, because it increases the reach and appeal of Uber’s service, encouraging more consumers to download its app.

Of course, once a new user has the app, there’s the possibility that they might, in time, ride with other types of Uber vehicles — which return higher margins for the company than a rickshaw.

Cash remains an important payment method across Asia, in spite of the convenience of cashless payments. That’s true for e-commerce, and likewise taxi rides. Cash-only fares will help extend Uber’s appeal to new demographics. From there, again, there’s the possibility that these new customers will, over time, use Uber’s more premium services.

Uber serves 11 cities in India, which makes the country its second largest behind the U.S.. As we’ve said before, the company is making a huge push into India.

Ola remains the market leader with its coverage of more than 40 cities and towns nationwide. But Uber is focused on India’s biggest cities, where it is rapidly expanding its breadth of services, which numbers four different rides in New Delhi: Uber Black, Uber X, Uber Go and (now) Uber Auto.