An “Add-to-Calendar” button might not sound the most exciting foundation for a startup, but the team behind Stanza sees the button as a new way for organizations to reach their fans, customers, and team members.

The company, known until today as SpotOn.it, is announcing that it has raised $4.3 million in seed funding from Metamorphic Ventures, Founder Collective, Tekton Ventures, Western Technology Investment, Stanford-StartX Fund (SpotOn.it participated in the StartX incubator), and angel investors including Ronnie Lott and Harris Barton (both former NFL players). And although it counts more than 300 sports teams in NFL, NBA, NHL and NCAA among its customers, it’s also expanding from sports to a broader group of beta testers.

As I mentioned, the starting point for Stanza is the Add-to-Calendar button — the button that lets you add online events to your personal calendar. Using Stanza’s technology, it becomes a more powerful tool, allowing the event organizer to push additional updates (such as scores after a game or recipes after a cooking class) and to integrate with other services (like buying tickets or taking an Uber to the venue). The organizer also gets analytics about how people are engaging with the event listing. 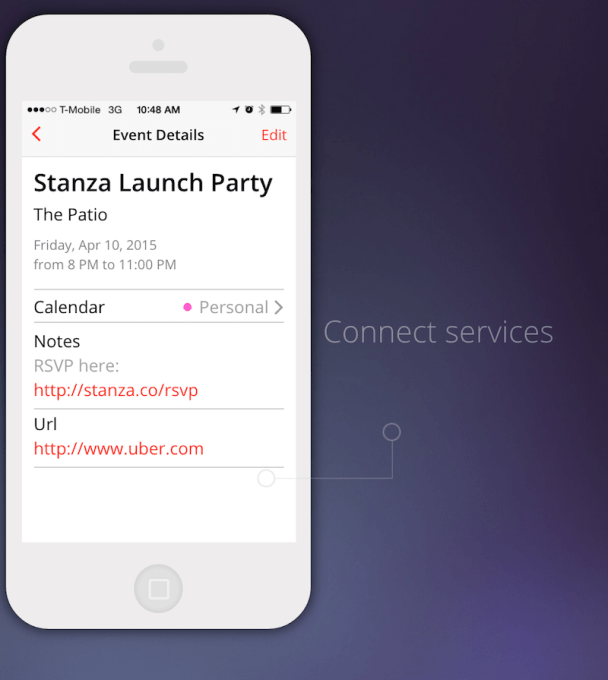 You can see a live example of the button on the college basketball page for SiriusXM. The company says other early users include political campaigns, PTA groups, student groups, and fitness studios.

“As a company and brand, our goal is to power calendar everywhere,” said founder and CEO Smita Saxena. As for the new name, she said it’s meant to be “whimsical”: “Every event in your calendar marks a starting and stopping point in your day — similar to what a stanza represents within a poem.”

When I first wrote about the startup in 2013, it was focused on helping users find new activities based on their calendars. The problem with that approach, Saxena said, was that “people who wanted recommendations had empty calendars (so no data to learn from), and people who used calendar had too few open slots that we could fill (so low use case).”

So later that year SpotOn.it/Stanza started working on what Saxena called “Add-to-Calendar button 2.0,” going live with its first customer, Stanford, in January 2014.

Stanza is currently in a pre-order period — it says pre-order customers will be “on boarded immediately” and pay $7 per month for the first year. The period will end in late summer, when pricing increases to $15 per month.