Microsoft and Dropbox are expanding their already close partnership today with the reveal of a new integration that will now allow consumers to edit their Microsoft Office files, including Word, PowerPoint and Excel documents, in Dropbox using Office Online via the web.

Previously, many of these edits would have taken place using Microsoft Office’s desktop applications – which also meant that you would have to be at a computer where the software was installed. The online option makes the service more flexible, as you can edit your files from any computer, including a borrowed machine or a shared computer, like a business center’s kiosk PC, for example.

To use the new feature, you’ll click the “Open” button when you’re previewing the file on the web, Dropbox explains, and then you’ll have the option to edit the file from your web browser using Office Online. The option is available to Dropbox for Business customers who have an Office 365 license as well as Dropbox Basic and Pro users, and those who are on the free tier of Office Online. The only requirement for using the free tier of Office Online is creating a free Microsoft account, the company says.

This change is notable because, before now, consumers using a web-based version of Office didn’t have online editing options when previewing files in Dropbox. Dropbox Business customers however had a collaboration tool called the Dropbox Badge which allowed collaboration to take place inside Office documents on offline apps like Word and Excel. With the new integrations, using Dropbox via the web is something that’s available to all consumers and business users alike.

The new integrations will be live as of today.

In addition to being able to access and edit files in your Dropbox from Office Online, you’ll also be able to save new files to Dropbox without leaving Office Online. 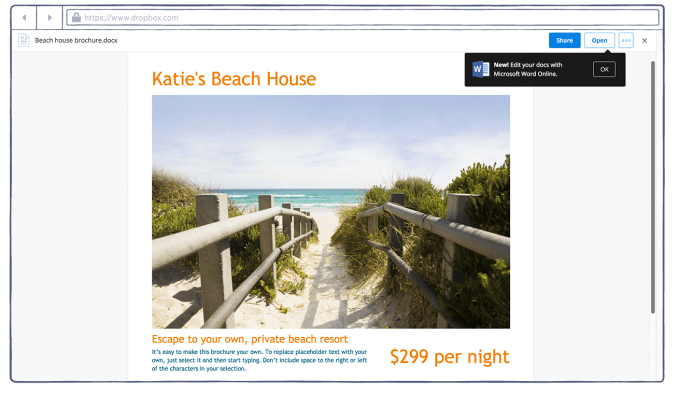 Dropbox notes the potential impact for its user base is large. A number of its customers are using Dropbox to store their business documents. In fact, the company says there are over 35 billion Office documents stored in its service at present, and the integration will allow “millions” of users to take advantage of the new functionality. In total, including desktop installations, Microsoft has over 1.2 billion Office users, 9.2 million of which are Office 365 Home and Personal subscribers.

While somewhat of a minor feature release in the grand scheme of things, the integration could position Dropbox as a more competitive option versus other cloud storage providers, like Google Drive, for instance. Because Google also operates its own online office suite, it’s been able to make creating, editing and then saving documents in the cloud a seamless activity for its customers.

Dropbox, on the other hand, doesn’t develop its own document creation tools, though it’s starting to take some small steps toward this goal with the recent reveal that it’s working on its own note-taking service.

By working with Microsoft, however, Dropbox can make it feel more like a service that works entirely via the web, instead of requiring the extra hassle involved with using desktop software applications.

Dropbox, too, has been making improvements for its web-only users, as it also announced last week improved web previews which load documents faster and included new functionality, like a redesigned document toolbar that adapts to the file type being viewed.

Today’s new integration follows a number of recent moves that have seen the two companies working more closely in recent months to make their respective services more compatible. In November, as you may recall, Microsoft and Dropbox first announced a strategic partnership that began to offer users the ability to edit Office docs from Dropbox’s mobile app, the ability to access Dropbox docs from Office apps, and in general better support for Dropbox within Office and vice versa. In addition, users can now also use Dropbox on Windows Phones and tablets.

However, Microsoft is not exclusively working with Dropbox when it comes to expanding Office’s reach – in February, it also announced broad support for other third-party cloud services, including iCloud and Box.