I didn’t want to love this car.

Everyone I’d spoken to about the P85D leading up to this review was simply enamored. Surely they were just entranced by the new and shiny, I thought, allowing the hype and buzz around the Tesla brand to blind them to the car’s flaws.

I didn’t want to love this car. I failed.

The short version: the P85D is a monster in disguise. It’s insanely fast with power for days, yet quiet, comfortable, and spacious enough to be a daily driver. The 17″ screen built into the dash is beautiful and feature-packed, but lacking some obvious functions and occasionally slower than the interface in a car that costs this much should ever be. At a base price of $105k, the P85D isn’t a feasible purchase for most — but with Tesla already promising cars in the $35k-40k range, it’s an incredible example of what this relatively young auto maker is capable of.

The P85D feels like something that fell through time and landed here accidentally. Not from some distant year; something from just a bit away on the chronological horizon. Something that will exist eventually, but that can’t, shouldn’t, yet somehow does already exist.

And while that’s mostly a good thing, falling through a portal from the future has its pitfalls. 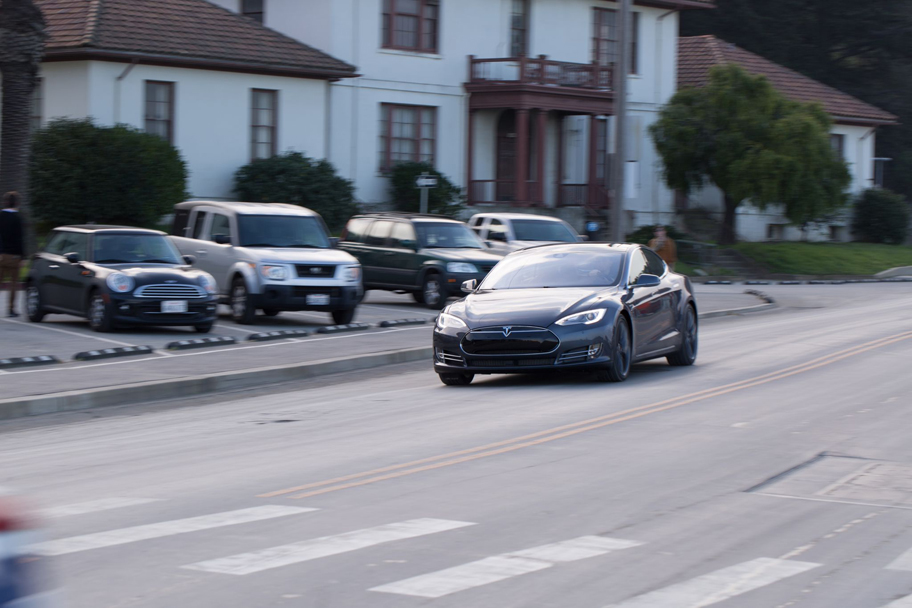 Those numbers might sound fairly crazy — and they are. They come together to make the P85D one of the fastest accelerating four door cars in production.

But they’re just numbers. For most people, numbers like that just translate to “more horsepower than my current car” and “takes off really fast at a stop light”.

And those are perfectly fine, accurate ways to think of the P85D — but they’re not quite the complete picture.

Yes, the P85D is powerful. Absurdly so. Even on San Francisco’s steepest hills, pounding that accelerator made me feel like I was strapped to a rocket. 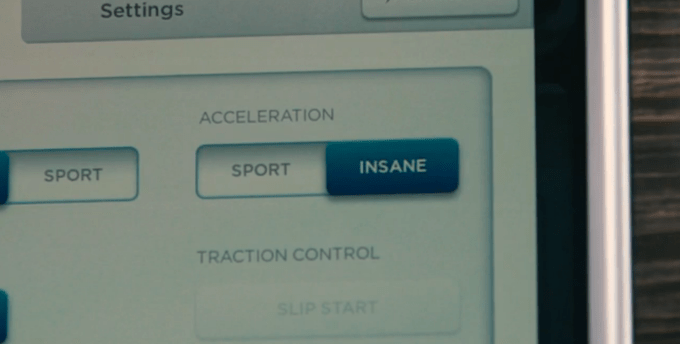 Slide the car into its oh-so-appropriately named “Insane” mode.

Stomp the accelerator. There is no engine roar (nor, for that matter, an engine.) There is no guttural growl of pistons firing and gasoline exploding. Instead, a winding whir — like something ripped straight out of Star Wars — and you’re gone. Your head is pinned to the seat, your heart is in your throat, and you’re flying.

Lightly ease into the accelerator, instead. Pick up the kids from soccer practice, take’m out for ice cream, and be careful to respect every last speed limit sign.

It’s almost surreal, really — with so much power and torque at a whim, the P85D starts to feel like it’s wired into you. It’s a wonderful driving experience, and one that everyone should experience for themselves at some point. 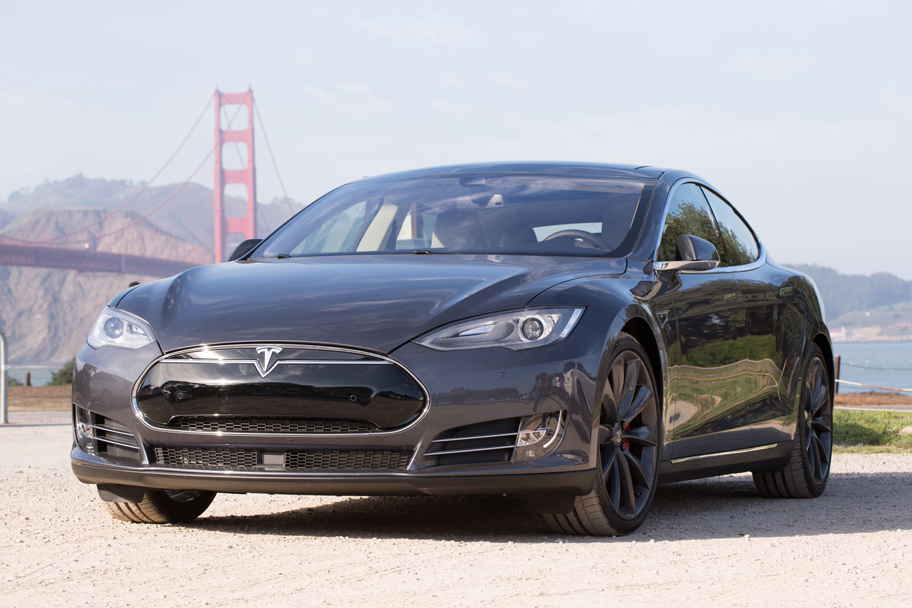 The P85D is a blast to drive. But the driver’s seat is just one of five; how is it as a passenger?

The passenger seats, both front and rear, are comfortable and incredibly spacious. The P85D is a surprisingly large car (if you’ve never seen a Model S in person, it’s probably bigger than you think) with its electric components requiring a relatively hefty footprint — but that translates into a helluva lot of leg room inside the cabin.

What it lacks in the passenger compartment, though, is storage space. It has a small glovebox, a pair of cupholders, and what is effectively a bucket on the floor between the driver and the passenger — but outside of that, everything has to go in the front or rear trunks. There’s no seatback storage, and the (rather big) armrest doesn’t offer storage beyond the cupholders.

(Note: Tesla is working on quite a few autopilot/self-driving/self-parking features that we’ve written about a few times – these weren’t enabled yet in the vehicle I tested) 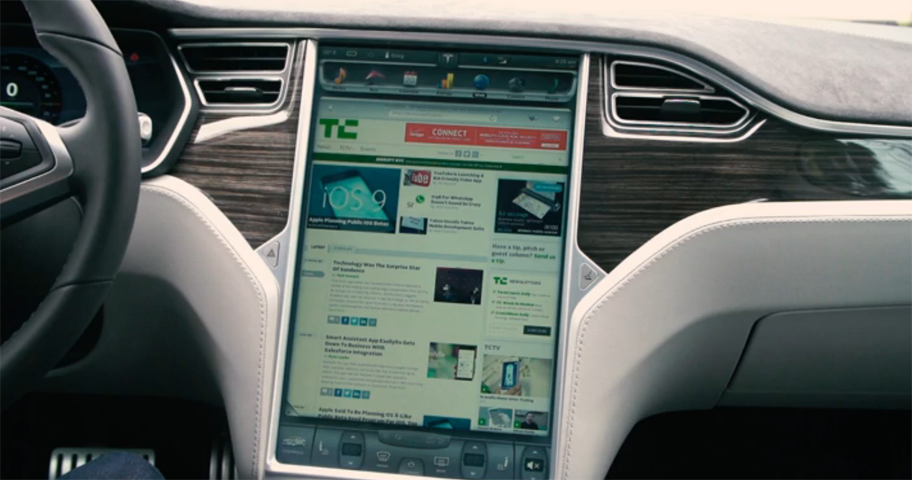 An impossible-to-miss signature feature of the Model S line, the P85D packs a massive 17″ display into its center console.

It’s big, it’s beautiful, but it’s not quite perfect.

Here’s what it can do:

Here’s what it can’t do:

Speaking of distractions: the display can be fully operated at all times, including when the car is in motion. It’s an interesting design decision, but one that I’m mostly neutral on. It seems likely to become an issue as more Teslas hit the road.

One thing worth noting, but a fixable flaw: in our three days of testing, the display’s interface got unbearably slow (to the point that it had to be manually reset) on two separate occasions. Slow enough that someone sitting in the passenger seat mocked it. I get annoyed when my $600 iPad lags. In a $105,000 car, you don’t expect to see the interface stuttering. Ever.

Fortunately, Tesla can (and does) push software updates to the display, and I might’ve just caught them on a bad build. 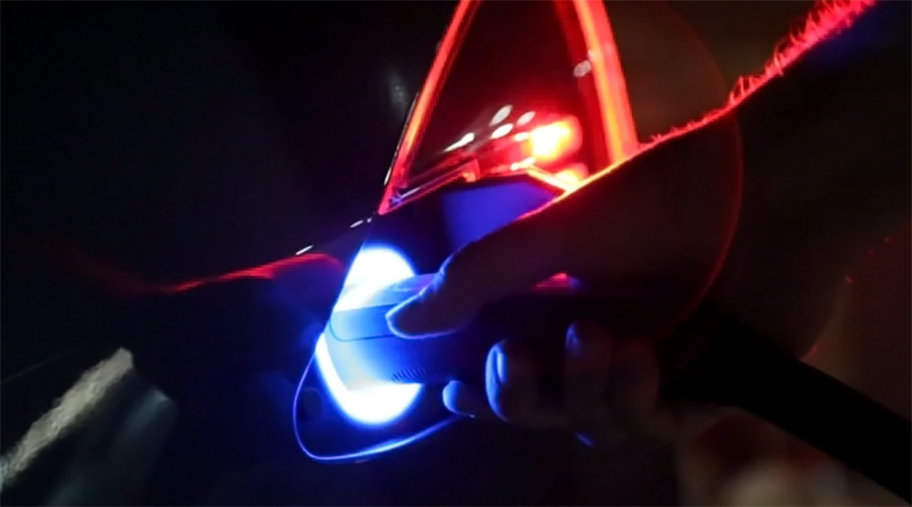 Ah, the big one. The aforementioned pitfall of falling from the future.

The car fell from the future, but the charging stations required to keep it moving didn’t come with it. The P85D is nearly perfect; its charging infrastructure, not so much. Yet.

It’s not hard to keep a P85D charged. You can charge it at home very easily, which helps considerably. But if you often stray from your daily commute, charging absolutely is something you have to think about. Tesla has been around for a few years, but even someone buying today is something of an early adopter. Never is that more obvious than when it’s time to charge up.

Gas stations are common enough that refilling your tank in a gasoline-powered car is an afterthought. Do you want to fill up at this station, or the next one? Eh, whichever one is cheaper.

Even when you know all the spots to charge, it’s not perfectly straight forward — even the rate at which your car will charge is something you have to account for. At one of Tesla’s Superchargers, 30 minutes of charging will get you 170 miles. Jacking into an outlet at your friend’s house, or a stray outlet at work? The same 30 minutes of charging might get you less than 2 miles. Even in San Francisco, finding a charger that could juice the car up relatively quickly required some digging around on my phone.

(Speaking of which, buyers should know that many older homes might need to have their wiring upgraded to charge the car at any sort of reasonable rate. This can cost a few hundred to a few thousand dollars, depending on your location/current wiring/etc.)

Charging a Tesla at one of Tesla’s superchargers is speedy and (!) free. But unless you live near or commute past one (there are only three or four spread across the Bay Area, even), they’re not always practical.

It’ll get better in time, particularly as electric vehicles become more ubiquitous and Tesla opens up more superchargers. And even now, it’s not hard to keep charged — but unless you only use the car for driving back and forth from work, it absolutely is something you have to actively think about and plan around.

The P85D will get an estimated 253 miles on a full charge. That’ll vary quite a bit depending on how you drive it, of course. In my test, which probably pushed the car a bit harder than one normally would after the initial “holy shit this car is fast lets blast off over and over and over again” period wears off, I got closer to 190 miles on a charge.

The car is pretty good at adjusting its range estimates based on your driving patterns, though, and an upcoming software update that factors in things like hills and wind speed should only improve it. 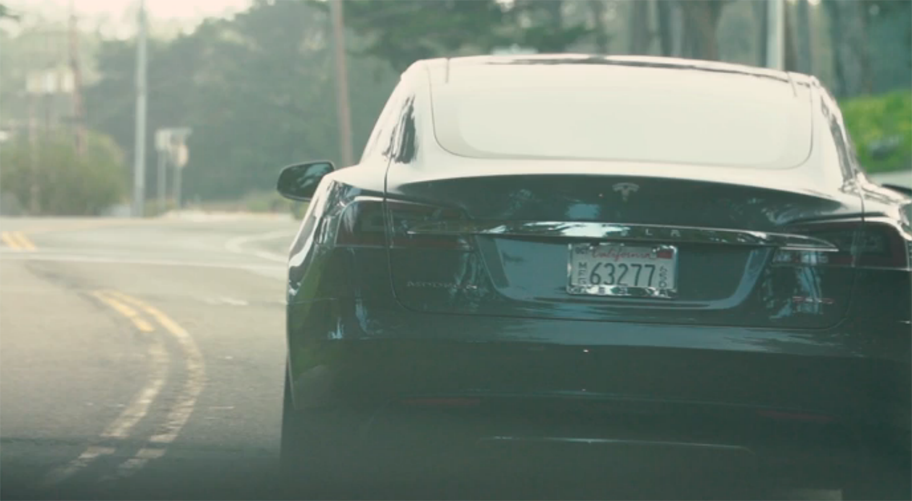 The P85D isn’t perfect, but it’s so close to perfect that almost any flaws I can highlight seem trivial.

That is, except for charging it. The early adopters willing to plan ahead can make it work, but it’s absolutely not as straightforward as keeping a gas car fueled up — particularly when you deviate from the daily back-and-forth commute. Electric cars have a chicken/egg problem; the cars have to arrive before the chargers are useful, but the chargers have to be everywhere before keeping the car charged is an afterthought. Now that the cars are coming, the charging network can only get better.

I was (very, very) sad to hand back the keys to this one. But would I buy one? Yes. Just not as my one and only car — not yet, at least. If I could justify (*cough* afford) owning a P85D and something gas-powered for the next few years — something so I could take off in for a weekend trip without worrying about charger locations? Absolutely. In. a. heartbeat.

But there’s more to the P85D than any one-off sale. As the pinnacle of Tesla’s offerings thus far, it shows what the company can build after less than a decade of selling cars. If the company brings that same degree of perfection and an experience even remotely like this to the $35,000 Model 3, everyone else in the industry better watch the hell out.

– It’s just so, so fast.
– Instant torque makes it feel like the car is wired into you.
– Ridiculously spacious
– Nearly silent
– That 17″ display in the console is absolutely beautiful
– It’s easy to find yourself speeding, but a front-facing camera watches for speed limit signs and gives you a heads up accordingly.

– Needs more storage within the passenger compartment
– That display could be used for so much more. Seriously, no video when I’m waiting at a supercharger? The software could also run a bit smoother.
– Tesla’s charging network needs to get bigger, fast.