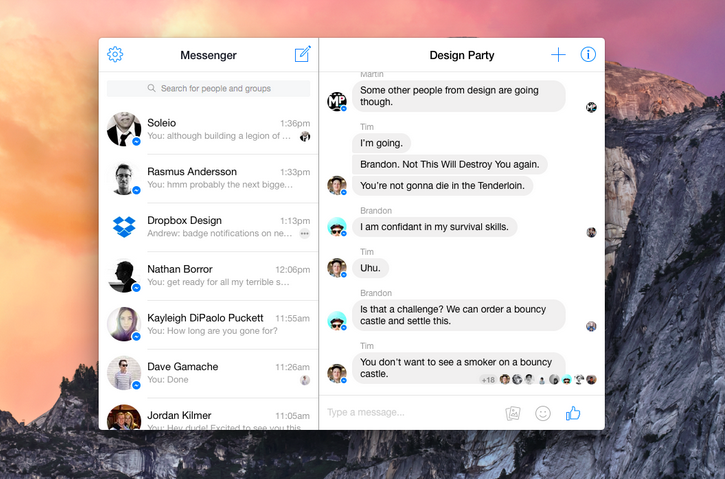 Well, damn, that was fast.

Just four hours ago, Facebook launched a new, dedicated interface just for Facebook Messenger. Want to send a Facebook Message but don’t want all the other cruft that comes with Facebook? Just go to Messenger.com. Bam.

If you’re on OS X, now you don’t even have to do that — someone has already wrapped up the new interface into a dedicated, standalone app.

It’s not perfect, which is completely understandable given that it was built in three hours… but it works surprisingly well, already. Image uploads don’t seem to work, and for some reason it makes an error noise every time I start typing a message — but overall, it’s quite solid. For being what is essentially a webpage wrapped in a sandboxed browser, it feels almost native.

The project was started by Dropboxers Rasmus Andersson and Josh Puckett, who have made the source code available for your perusal and modification on GitHub right over here. If you’d rather just download the pre-built client, that’s over here.

Next on the to-do list? According to Puckett in a Product Hunt thread, they’re working on getting notifications and dock badges working.