Ever try to read a Facebook message on the web and get distracted by your News Feed and notifications? Well now Facebook has a way to let you use Messenger in peace from your web browser. Today it launched Messenger.com as a dedicated chat interface. It’s rolling out worldwide for English users, with support for more languages to come.

You can still send messages from Facebook.com as always, but Messenger.com could become a favorite of busy users concerned with productivity, or those that use Facebook to chat with friends but don’t like the social content chaos of its main site.

The company tells me the “dedicated desktop messaging experience” is “meant to be complimentary to the Messenger mobile app”. 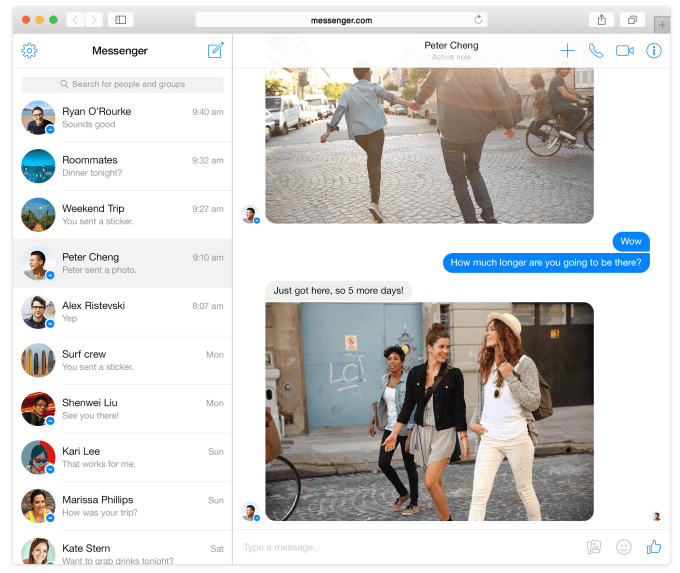 The Messenger site features a list of your threads on the left, with a big, clean, white chat window on the right. You can use most of the mobile app’s features from here, including audio and video calls, stickers, and photos.

For now it lacks the ability to record and send audio messages, instantly send a photo from your web cam, or use the new Messenger platform content sharing apps. But just like splitting Messenger’s app off from Facebook on mobile, doing the same on the web could give the company more room to pack in bonus features that differentiate it from SMS and other chat apps.

One nifty feature is the ability to turn on desktop notifications so you get a little pop-up overlayed on your computer screen when you get a message that lets you jump to your Messenger.com tab.

The move follows the launch of Facebook acquisition WhatsApp’s web interface in January. One big question is whether Facebook will release a desktop client for Messenger. That could rescue chat from the crowded web browser and make it instantly accessible with a single click from people’s desktops.

While Facebook’s user base is rapidly shifting towards mobile, it also understands that chat may be an even more ubiquitously useful feature than its social network.