Ben Rubin Contributor
Ben Rubin is the CEO and co-founder of Life on Air Inc., which most recently released the popular Meerkat app. Ben works with his team to pioneer "participatory media" through life-streaming communities.

The natural transition of every medium, since the beginning of human communication, is from a necessity to a vehicle for self-expression. Messaging evolved from the carrier dove to paper mail to email to Twitter.

When the cost of distribution approaches zero, a medium evolves to its peak for self expression and it has the potential to own all sub-use-cases.

Communication mediums can be measured by the context in which they are received. Example: if your audience is just one other person, it’s a different communication experience then when your audience is three, ten or hundred and so on. Another dimension to measure a medium is by the type of attention needed from the audience, and hence the type of delivery. Example: if I deliver content synchronously it requires a different type of attention from my audience than asynchronously.

How I Map Mediums Of Communication (With Examples Of ~$1 Billion Companies): 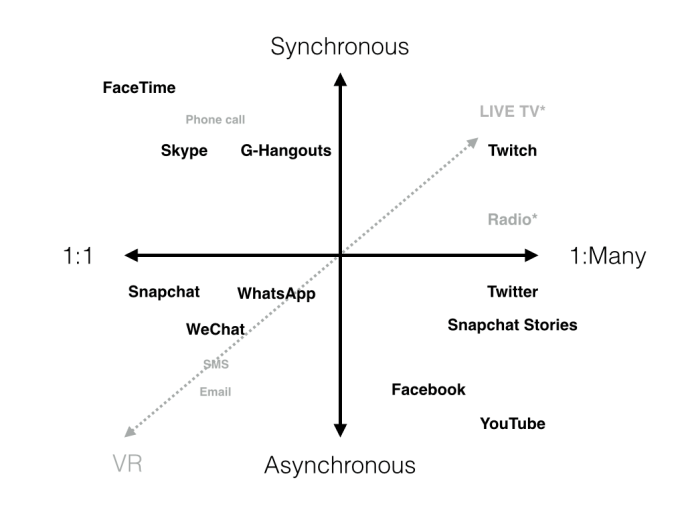 *Radio & LIVE TV — distribution cost are still extremely high in the context of the opportunity available with infrastructure and consumers in 2015. **Virtual reality (VR) is the 3rd Axis that affects the way we should measure a communication medium, still very small, but worth mentioning.

Inside of each of these four quadrants, successful products organize themselves by way of “emotional mirroring.” Since mediums support self expression, the most successful ones mirror our emotional states. I see four prominent states: The Formal, The Non-Formal, The Immediate & The Beautiful. Example: When you post a Snapchat story, you are expressing yourself in a non-formal-one-to-many, asynchronous, medium. Products with clear appeal to an emotional state entice people to express themselves through them faster (read adoption rate). 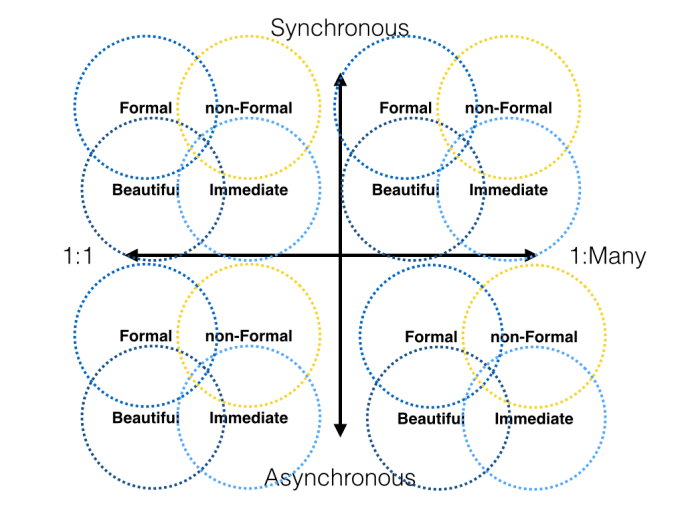 Jacques Lacan, a French psychoanalyst and psychiatrist, theorized that humans create fantasy images of both themselves and their ideal objects of desire — he coined it as ‘The Imaginary’ . The Imaginary can roughly be aligned with the formation of the ego which serves as the mediator (as in Freud) between the internal and the external world. He then identifies that to communicate we have to reduce the world into symbols, and whereas the Imaginary is all about equations and identifications, The Symbolic is about language and narrative. Example: Once children enter into language and accept the rules and dictates of society, they are able to deal with others.

The one-to-many synchronous quadrant is exciting because it introduces a new type of content that has never existed on this scale: participatory media.

The point, here, is that communication products become Symbols to our Imaginary. They become the language or narrative we want to match to the ideal self we want to project — at a certain moment. In most cases, that’s also what draw us to them in the first place. By being a derivative of a medium, a product is setting a language which our ‘ideal-self’ is drawn to. I’m trying to break down the ideal self into four overarching orders; Hence The Formal, The non-formal, The Immediate and The Beautiful. (a topic for another post)

Looking at the one-to-many synchronous quadrant, still dominated by live TV for over 70 years, with high distribution costs, the blowing whistle was Twitch. It proved the gaming vertical was meaningful enough.

In order for one-to-many synchronous mediums to exist in the world, people need to be able to contribute and consume on the go. In order to create a critical mass for a product in this quadrant, you need enough people walking around with internet connected cameras and screens in their pockets and have a network fast enough to support this kind of experience.

By being a derivative of a medium, a product is setting a language which our ‘ideal-self’ is drawn to.

There’s also the point of cultural readiness for ‘velfies’ (video selfies). Look at Snapchat, a non-formal, asynchronous, one-to-one (and now also, one-to-many, in ‘my story’ and ‘discover’) as a catalyst for this quadrant, by making people comfortable talking to an audience via a mobile camera and even being on camera. A strong indication of a powerful medium is when it becomes a catalyst (also a topic for another post).

The one-to-many synchronous quadrant is exciting because it introduces a new type of content that has never existed on this scale: participatory media. in this type of content, the audience is no longer a consumer of the content, but actively taking part in it, changing the reality of the other side by being present virtually. This audience empowerment at a large scale can make an impact in politics, education, journalism and entertainment in real time. An audience that doesn’t just want to hear the story but rather they want to change it, because they can.

Editor’s Note: Ben Rubin is the chief executive and co-founder of Life on Air Inc., which most recently released the popular Meerkat app. Ben works with his team on “participatory media” through live-streaming communities.