While some among the handful of startups exploiting the revenue-generating opportunities that come from using an Android phone’s lock screen as an advertising medium have since refocused their efforts, one of the early movers in this space, Slidejoy, has just closed on its first round of funding. With $1.2 million in outside investment, Slidejoy will now continue to develop its app that rewards Android users for renting out their lock screens to become interactive newsfeeds that also feature various promotions.

The app, which is just over a year old and now has hundreds of thousands of downloads, displays a news story or some sort of ad or deal every time you check your Android phone. You can slide to the right to ignore the card and go to your home screen as you would normally, or you can slide to the left to get more information on the card shown. You can also slide up to see an additional card, if you choose.

Unlike competitors in the lock screen advertising space, Slidejoy has been pursuing a slightly different business model. Its users receive a flat rate in “rent” from the startup, so it doesn’t matter how many news stories or promotions they click.

“If we rewarded our users for every impression or click, then we’d just be inviting abuse and false leads for our advertising partners, a bad look for everyone,” explains Slidejoy CEO Robert Seo. “By giving a flat rate to users, Slidejoy is able to balance keeping users happy while providing quality leads to our advertisers,” he adds.

Seo says Slidejoy decided to go this route because the company wanted to make sure advertisers were hitting their KPI (Key Performance Indicator) goals. And, depending on what the brand wants to accomplish, Slidejoy charges per impression or click. 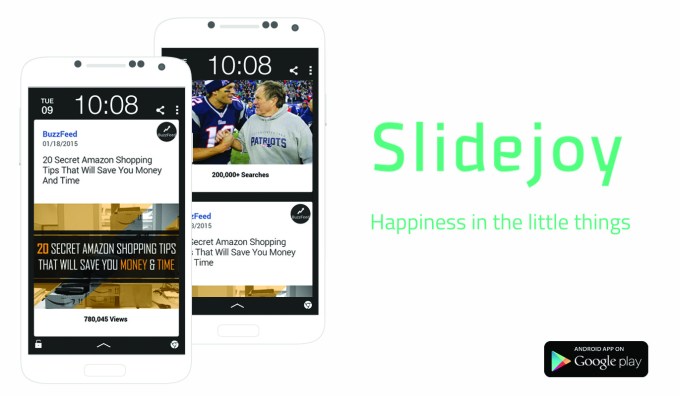 Currently, users are rewarded up to $6 per month, based on the number of advertisers the company has at the time. However, according to some of the comments on Google Play, many seem to be earning less than that. User feedback also appears split into two camps. There are those who are happy with the payouts because, after all, it’s free money for basically doing nothing but renting out your lock screen. And then there are those who think the payouts are too low, or that it takes too long to collect their balance.

To date, the company says it has worked with hundreds of advertisers, including retailers like Macy’s, app developers like Lyft and Clash of Clans, auto makers like Toyota, media companies like Yahoo, and even startups like MeUndies. Many of the advertisers are also repeat customers, notes Seo, who adds that Slidejoy’s best features are its 100% ad visibility and its lack of accidental clicks.

However, Seo admits that this can be a tough space to succeed in. “It’s a very difficult business because you have to solve the chicken and egg problem before running out of cash. You can’t get advertisers without users and users without advertisers,” he explains. “We’ve been focused on the advertiser side of the problem while improving our product and increasing our user base.”

With the additional investment, which was led by members of the Wharton Angel Network and Harvard Business School Angels, Slidejoy now plans to spend on increasing its marketing efforts in order to attract more users. The startup will also make some hires on the advertising sales side of its business, too.

Slidejoy is currently a team of five in New York and Seoul, South Korea. Along with Seo, a former U.S. Marine who later worked on Wall St., the company is co-founded by Hovan Yoo, previously the lead Android developer at Line, and Jay Chung, who previously worked on various apps, including South Korea’s first smartphone messaging app.