Online ticket sales startup SeatGeek has raised $62 million in Series C funding. Co-founder Jack Groetzinger confirmed to TechCrunch that the round was led by Technology Crossover Ventures, with participation from previous investor Mousse Partners, as well as Accel Partners and Causeway Media.

This brings the funding total up to $103 million. According to one source, that puts the valuation at about $200 million.

The new funding will help the ticketing company take on competitor StubHub, particularly in the mobile space. SeatGeek launched in 2009 as a mobile-first ticket sales operation. Its mobile applications have been downloaded over 3 million times, and over 60 percent of SeatGeek users now access the service via a mobile device, according to the company. 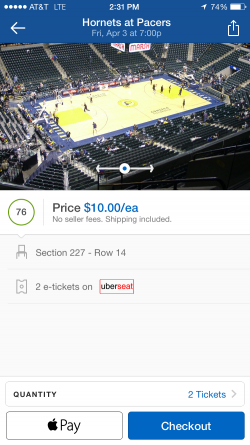 Both SeatGeek and StubHub have made some strategic partnerships in the mobile music space lately. StubHub Music partnered with Spotify earlier this year and has been focusing on an end-to-end experience for users involving music discovery and local event recommendations.

SeatGeek made similar partnerships with Spotify, Rdio and Last.fm. Groetzinger affirmed the company would be focusing on relevant recommendations such as tickets that are available rather than localized recommendations for shows that may have already sold out.

A big priority for the startup will be to now focus on marketing and hiring more engineers to work on the mobile experience. SeatGeek has doubled the overall team in the last year, growing to 64 employees now. A majority of the money will be used for marketing purposes and to increase the team to 110 employees by the end of 2015.