Twitter this morning is launching Curator, its new product that lets media organizations, publishers, and broadcasters identify, filter and display tweets and Vine videos on any screen in real-time. The free service, which is something of a competitor to Storify, is designed to help those in the media industry and, soon, others too, make better sense of the barrage of data on Twitter’s network in order to highlight the best content for their own readers and viewers.

The company had unveiled Curator during the News:Rewired Conference in London earlier this year, but, until now, it had not been broadly available. The product was still in beta and was being tested by a dozen or so organizations, including the NYC Mayor’s office and Italy’s major network, Mediaset.

But starting today, any media organization will now be able to get its hands on the new service, which will make integrating tweets and other content into their TV newscasts, programs, websites or mobile apps quicker and easier.

With Curator, Twitter offers a variety of filtering tools that let publishers and broadcasters create either simple or highly complex queries that can help them drill down on specific content or current trends. For example, a news organization might choose to use the product to show viewer reactions in real-time during their telecast, or a government agency might display a Twitter feed alongside a live-streamed speech. 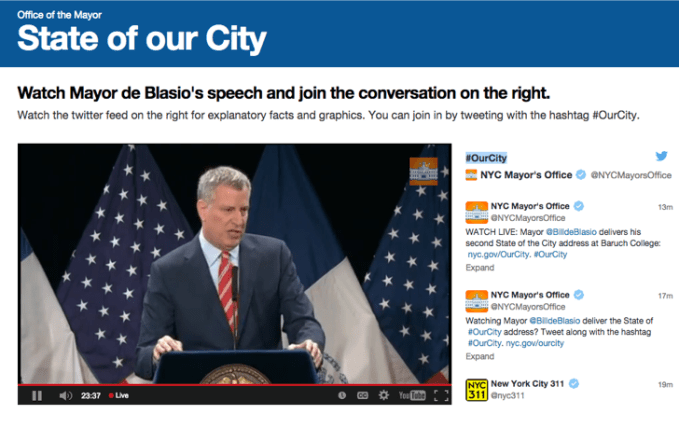 While initially designed to meet the needs of media organizations, Curator could also be used in an entertainment context, doing things like showing hashtag references during a TV show, or displaying tweets on the big screen at a music concert or festival, for example.

The service makes it easy to run a simple query, in order to pull up results like the most-retweeted content, or tweets that include videos and reference a given hashtag.

But what makes the service powerful for its users are the variety of ways it’s able to filter the Twitter “firehose” – meaning, the full stream of all the posts taking place on Twitter’s network – in real-time. Using Curator, companies can find and filter these tweets by a range of factors, including keywords, authors (@ handles), location, language, time zone, follower count, number of retweets or favorites, verified users and much more.

This allows for more complex queries. For example, an organization could ask to see something like women who were saying positive things about a given topic in a particular time zone. Users can also negate terms in their searches, too, which could help to filter out unrelated content or curse words, for instance. 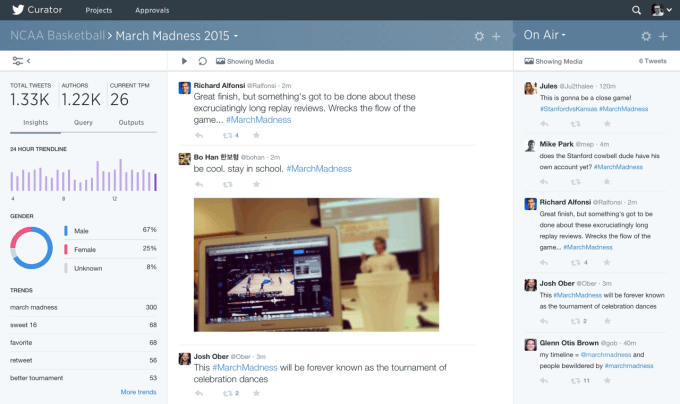 In addition, the service has the ability to natively search through Twitter’s video network Vine for relevant videos, and it can pull up popular live-streamed Periscope videos by using the filters combined with the appropriate keyword.

While there are a number of third-party analytics companies on the market today that allow Twitter users to derive insights from tweets, Twitter says that Curator is not really focused on that market. Instead, explains Curator GM Mark Ghuneim, the service is designed to surface the content in real-time, not provide analysis after the fact. He also describes it as more of a “baseline” product, which third parties can extend by offering things like design customization or support on top of Twitter’s free service.

“That’s where the opportunities pick up for others,” he says. “We’re there to enable and partner with them.” Unlike with Twitter’s embed functionality, Curator doesn’t dictate how the tweets should appear on the webpages or screens where they’re later displayed. The media organizations themselves decide on the format for that, and it’s unique to every property.

Today, Curator is working with a number of certified design partners including Flowics, Livefyre, ScribbleLIVE, Spredfast and others. 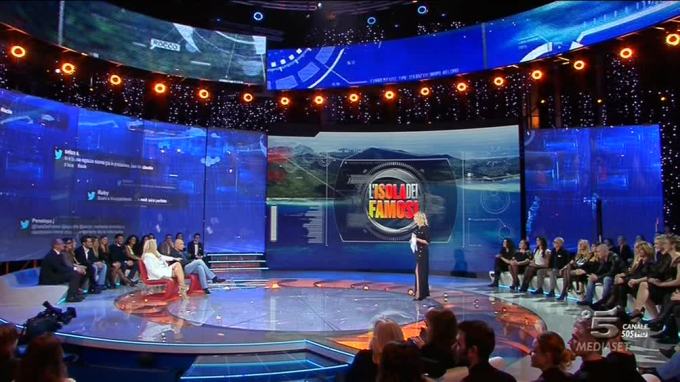 Organizations can also collaborate on their queries in Curator, allowing them to build collections together, as well as invite others outside of those doing the news-gathering directly to get involved.

“For example, you could invite someone from Standards and Practices to approve everything before it goes live,” Ghuneim points out. “It was really built for that purpose in mind – the broadcast and syndicated media use cases,” he says.

As a free product with no plans to include premium features or integrate advertising, Curator is more about helping impact Twitter’s bottom line by helping the company’s tweets be shown to a larger, if not “logged-in,” audience.

This metric is something Twitter has been trying to push in recent months, estimating that there are some 600 million people who land on Twitter pages while logged-out, while the network itself claims just 288 million registered users. The company’s recent search deal with Google should impact those numbers significantly, too. And by getting more tweets seen on news sites and TV programs, the company can again tout – and now, by way of Curator, track – the visibility and spread of its tweets to this wider audience.