Facebook’s experimented with ways to surface old Memories since 2010. But after seeing Timehop hit 6 million daily users on mobile, Facebook is officially launching a competing nostalgia feature called “On This Day.” It shows users their Facebook posts from the current date in past years, like photos from exactly one year ago, or status updates from four years ago.

Rolling out globally over the next few days, On This Day will be accessible from https://www.facebook.com/onthisday, Facebook’s bookmarks menu, search, News Feed stories, or opt-in notifications on iOS, Android, mobile web and desktop. 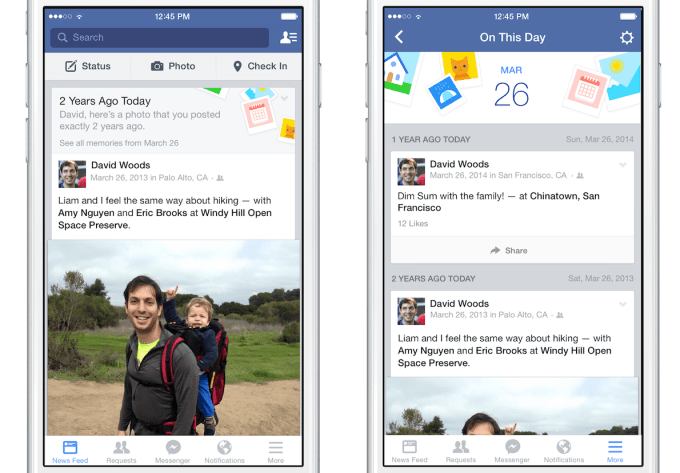 While Timehop can dredge up memories from Facebook, Twitter, Instagram, Foursquare, Flickr, Dropbox, iPhoto or your camera roll, On This Day just sifts through Facebook. The social giant’s product manager on the feature, Jonathan Gheller, refused to cite Timehop by name, claiming the feature was inspired because “we see behaviors from our community and we try to build on top of them.”

But on my third attempt, when asked if he thought On This Day and Timehop’s features were similar, he said “Yeah, we look at what people do at Facebook. I don’t spend too much time looking at what other people are doing or not doing. I think that you just focus on doing things people want, and doing them as best you can.” 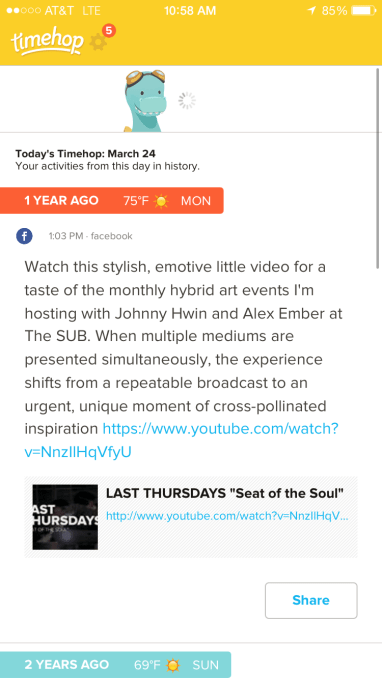 Facebook tells me it has no plans to monetize the feature directly. Still, getting people to tune in to On This Day and reshare posts they find drives engagement and lock-in with Facebook’s News Feed, where people see ads. The company likely hopes that many of its 890 million daily users have never tried or even heard of Timehop, but will enjoy revisiting their old Facebook memories.

Timehop CEO Jonathan Wegener didn’t seem too worried. After hearing about On This Day, he told me “My general feeling is that this is awesome validation that we’re doing something worth doing. One of our investors put it really nicely that if Facebook isn’t playing in your space, you’re probably not doing something worth doing.” He says the move confirms “Timehop is important and old [stuff] is important.”

However, Wegener says “Our mission is broader than just ‘replay your Facebook content.’ It’s to collect your digital history from everywhere.” He concluded “I’m not particularly scared of this feature. I think it’s a really nice nod to what we’re doing.”

Starting today and rolling out to everyone worldwide over the next week or so will be a bookmark in the Facebook web sidebar and the mobile site and apps’ navigation menu. Clicking it, the direct link, or Facebook searching “On This Day” will open a feed of status updates, photos and posts you’ve been tagged in from exactly one, two or several years ago. Only you will be able to see these resurfaced posts unless you choose to reshare them with friends.

From your On This Day page, you’ll also be able to subscribe to a (typically) daily notification reminding you to check out that date’s nostalgia feed. 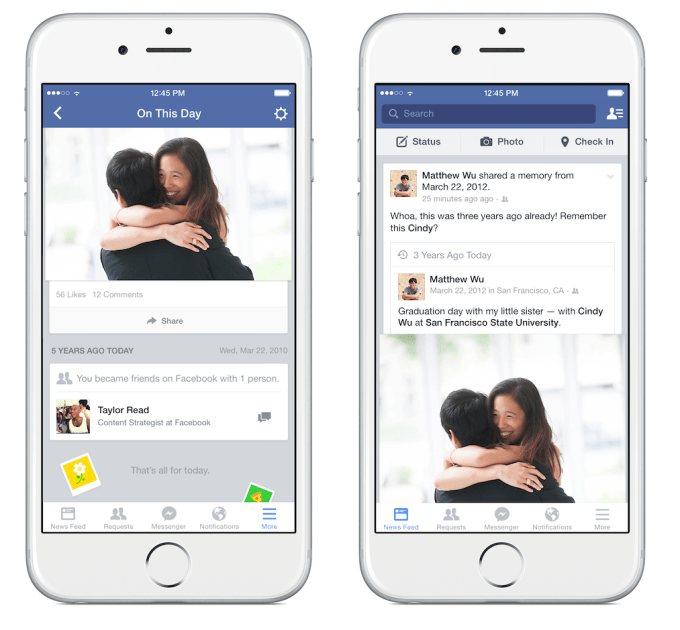 Gheller gives the example of On This Day showing him photos of his 1.5-year-old child when she was just an infant a year ago, and status updates tagged with him by his pregnant wife two years ago. He says Facebook has “been playing with this idea for a couple of years,” referring back to Memories. It refined this incarnation of the product recently with lots of internal dogfooding and some external testing internationally.

After seeing the backlash people had to its Year In Review feature that sometimes surfaced painful memories of ex-lovers and deceased friends, Facebook built special rules into the On This Day algorithm to protect people’s feelings. If it knows you listed someone as your romantic partner, then removed them, it won’t show you posts including them in your News Feed. It will also avoid displaying memories of friends who’ve passed away.

[Clarification: Facebook may still show posts about ex-lovers and deceased friends if volunteer to open the On This Day page, but it won’t forcibly push this sensitive content to the News Feed.]

Even as I insisted the product looks and acts just like Timehop, Gheller explained why it’s important. “What we realized is that consuming memories from the past and resharing them rewires our relationships…it really reconnects me in a profound and beautiful way.”