Amazon has been working hard to build up the popularity of its Android-based Appstore with consumers and developers — borrowing from the well-thumbed Amazon playbook of deep discounts to drive usage. Now, a new feature it wants to launch looks like it could be its biggest disruptive storefront promotion yet. The company has been working on a new section called “Unlocked” that will offer users a whole range of paid apps, along with those that utilize in-app purchases, free of charge.

Think of it as Amazon Prime for apps. 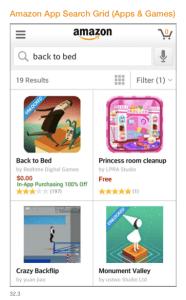 App developers whose apps are highlighted in the deck include biggies like Sega America, whose Sonic Dash game features prominently in the presentation; as well as notable independents like UsTwo, whose Monument Valley game is also flagged as an “Unlocked” app.

Other non-gaming apps listed in the deck include OfficeSuite 8 + PDF Converter — one of the more popular apps for reading and editing Microsoft Office apps on Android devices; and Ultimate Guitar Tabs & Chords.

The first of these is a free app with in-app purchases, while the latter is a paid app with additional items that can be purchased in the app. Under the Unlocked promotion, everything in and around these apps would be free.

Details such as when Unlocked is expected to launch, or the full list of actual participating apps, is not noted in the presentation. We’ve reached out to Amazon spokespeople for comment and will update when and if they respond. Developers we have contacted have told us they are under NDA and cannot discuss anything.

But the basics are outlined simply enough in the presentation, which uses the code names “Gretzky” and “Snuffy” to respectively describe the new feature and user flow around it.

(Why Gretzky and Snuffy? I don’t know but my guess is hockey — Wayne Gretzky and Carl “Snuffy” Liscombe being two of the greats of the game. And hockey is a pretty good metaphor for how quickly users shoot and bounce from one app to another.)

In a preamble to the presentation, the company sets out its objectives: the program needs to be clearly identifiable to users; the selected apps need to be obvious to users; and the apps are “conveyed as high value provided by Amazon.” There are also some interesting attempts at a less cluttered experience: “Customers should not feel overwhelmed by thousands of apps, but can get them if they need to,” the presentation notes. “Gretzky Gateway should operate primarily on algorithms rather than human touch.”

To that end, Unlocked will get promoted prominently in Amazon’s own flagship app, and there are plans to use social networks and other platforms to promote Unlocked. The new feature is there not just to drive more downloads from the Appstore, but also more downloads of the Amazon app, which users need in order to access the Unlocked selection of apps.

Once users download the Amazon app, and then the Unlocked version of a selected app, they will be presented with further Unlocked branding each time that an in-app purchase has been waived, along with more options to share the experience with others. “Gretzky apps are easy to share and focus on app not Appstore when shared,” the company notes. 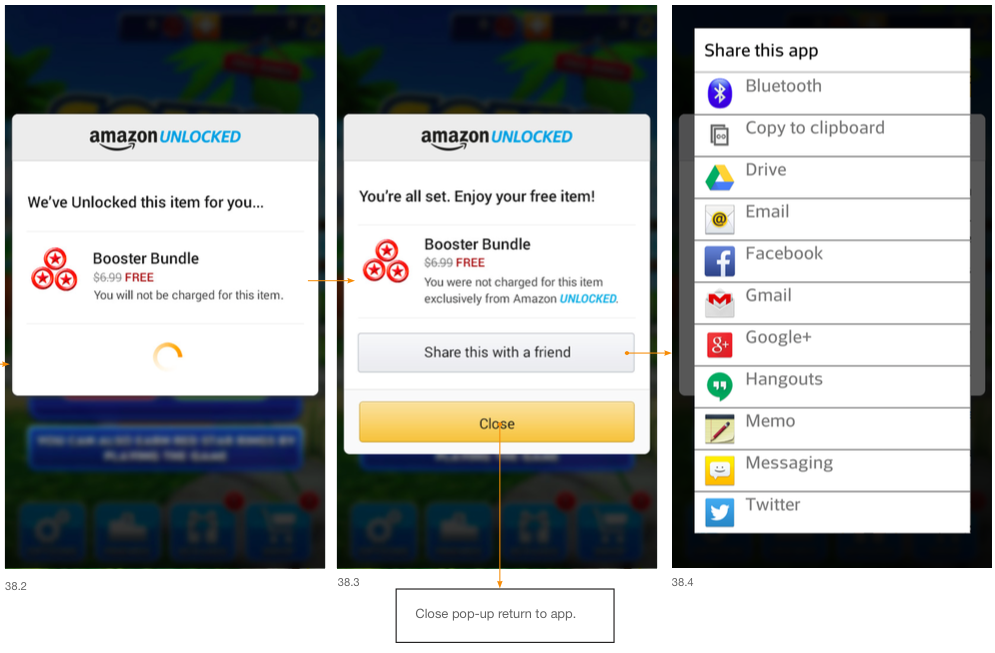 For those browsing the Appstore in the Amazon app, they will have the option to filter searches to look only for Unlocked apps, or to see them in a mix with other offerings. As with other Amazon e-commerce experiences, users are given recommendations based on what they have downloaded already and other parameters. 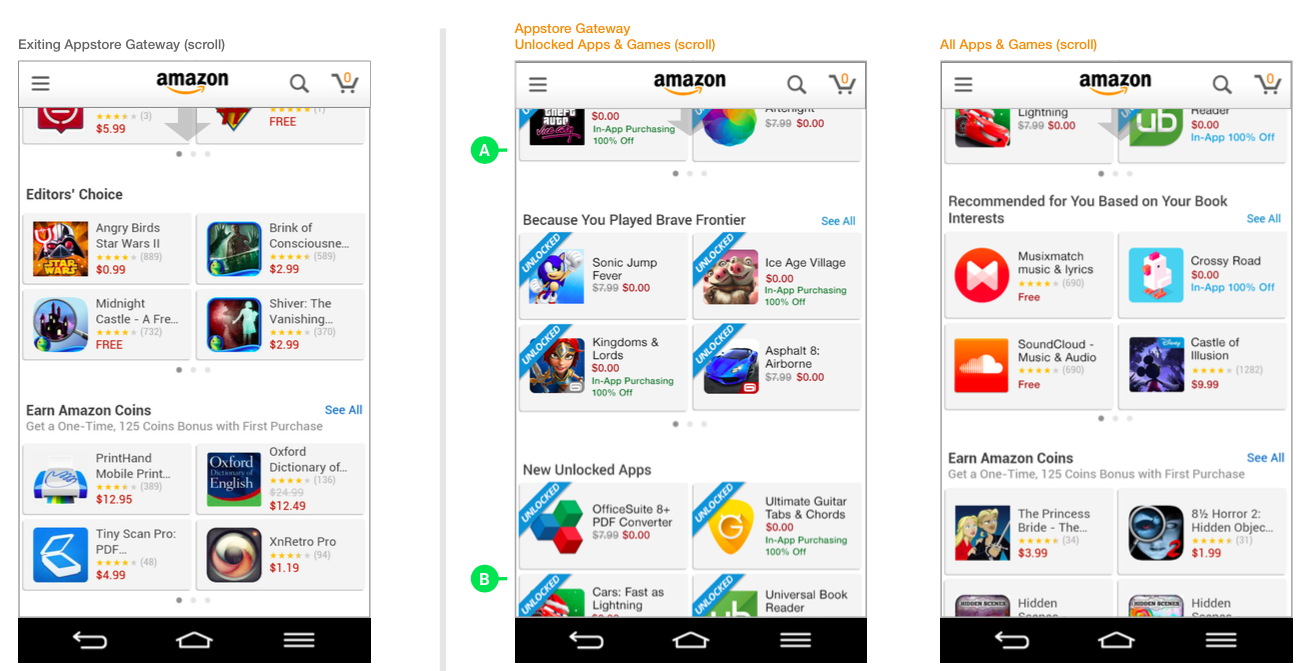 The wider context of Unlocked is interesting on a couple of fronts.

The first is that this is one more example of how Amazon is turning to price-busting moves to boost activity on its platform.

Amazon is no stranger to offering deep discounts — or free items — to users to drive more business to its products and services, whether it’s on pricing for books, or shipping and video content through Prime, or enterprise services through AWS.

The move puts pressure on competitors that struggle to match the prices that Amazon offers — and Amazon wins by playing up the volume-based game of aggregating lots of revenues on thin margins, through economies of scale, and simply making their platform more sticky for users to come back for more.

The Appstore is no different. The company regularly offers a free daily app to users, and to mark the Amazon Appstore’s fourth birthday, the e-commerce giant is currently promoting a larger free bundle of 34 apps that usually cost between $0.99 and $9.95.

Some of its free moves have been controversial. As one outspoken developer pointed out back in 2011 when the Appstore first launched, for all the glory of 100k+ downloads, he didn’t see a penny of income from it. However, from what we understand this is not entirely true and there is some compensation in certain cases.

“How popular the game is changes how much compensation you get,” one person says. “Amazon uses these free deals to lure people who use Android onto their store, so are more than happy to pay for these deals.”

And if there are some who aren’t happy with “free” promotions, that hasn’t stopped the service from remaining a popular way to boost users. Indeed, another developer I spoke to about Unlocked was very clear to ask to remain anonymous. “I like the free app promotion and hope to be included one day,” he said. 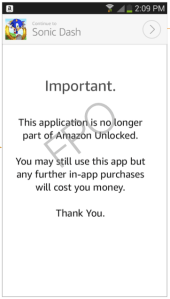 That may be what Amazon may be trying to address here. You see, Unlocked has a bit of a twist to it: When developers leave the Unlocked program, the extras become paid again.

This effectively means that developers who get nothing to begin with as the barrier to entry is lowered for new downloads, can hope to convert those users to paying customers when the wall comes back up.

The other area where the Unlocked promotion is interesting is simply in terms of the effort that Amazon is making to boost the Appstore. The company today is approaching 400,000 apps in its catalogue, but this still pales when compared to the 1.2 million apiece on Google Play or Apple’s App Store.

Beyond the numbers game, the company has faced other hurdles for its app business. Sales of devices like its own Fire Phone have been low, and that is reportedly driving developers away from Amazon’s ecosystem.

And it has faced challenges as an alternative to Google Play for other Android owners, too. Last year, Google delisted Amazon’s flagship app from the Play store after Amazon quietly integrated its Appstore, and so now, those who want to access it directly from their devices have to navigate to a download from the web and then specifically tweak security settings in order to permit it to work.

Will Unlocked unlock an app store jackpot for Amazon? It’s anyone’s guess, but as the company continues to look for ways to be relevant in the mobile economy, it will be one more way to try in what is likely to be a much wider, longer-term strategy.

After all, as Mike George, Amazon’s VP of apps and games said back in February, “We have patience and we take a long view of all these things that we’re doing, and we really do start with our customers…And if we don’t get it the first time, we keep iterating and inventing until we do.”