Editor’s Note: Ami Ben David is the CEO and co-founder of TL;DR Email, a simpler, faster email client for iPhone and Apple Watch.

Every time I think our way of life couldn’t change any faster, reality proves me wrong. Compare our lives today to just five years ago, and it’s a completely different digital world. Today, we live in the age of interruption overload.

We are bombarded with distractions: messages, social networks, emails, e-commerce, news, entertainment, sports – they all have something to say to us right now, and if the Apple Watch becomes a huge hit, we’ll have more of it, because as MG Siegler says “This is a push device.”

There are two ways of dealing with interruption overload. The first is to complain, argue against it, convince everyone that it’s bad for your health (it is, it makes you dumber), and then retreat to a yoga farm in Texas. Only to find out they have 4G.

But that won’t help much. Reality is stronger than complaints. A girl in my family told me how she spent a day without her smartphone. When she was back, it had 2,000 WhatsApp messages on it. She’s 12.

Nothing we say can change how she and her generation experience life, but even for grownups, things are not very different. Look at your email app icon. How many unread emails do you have? How many emails do you get per day? Add Facebook, Twitter, Instagram, Snapchat and WhatsApp — that’s a lot of interruptions.

The real opportunity, the only practical way of dealing with this overload, is to do what humans have always done. Adapt. Build new tools. Harness change to our advantage.

So what can be done?

A lot of research is dedicated to the effects of interruptions on people, and to strategies people can adopt to overcome interruption overload. But I come from a different place – I look at it from a position of responsibility, because I’m  a tech product designer. I make it happen. So my question is: What can we — the tech community, CEOs, product experts, designers, UX, marketing, developers, hackers — do to make notifications empowering rather than debilitating?

I like to compare this challenge to making the switch to environmentally friendly energy sources: We can be idealistic about it, but it will only work when that “eco stuff” costs less money or when the clean option is that much more desirable.

Keeping our digital environment clean is a similar challenge, because there’s a lot of money involved. It is seemingly in the core interest of every publisher to push louder and more frequently. Me, me, ME, MEEEE. Please look at me and not at my competitor. Buy my stuff and consume my content. For social networks it’s even worse, because theoretically the networks don’t even generate the interruptions — their users do.

The solution starts with awareness across the ecosystem — from platforms and social and communication networks all the way to the individual app — of interruption overload, which is the problem we’re creating as an industry.

Android and iOS control the majority of our interruption load. They must evolve to empower users with better and more granular control over which notifications we get, when we get them, and what we can do with and about them. Here are a few basic examples: 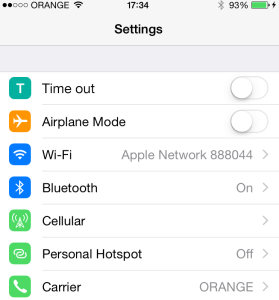 The iOS Do Not Disturb options are buried in the Settings menu, and control only very basic capabilities. Android may have those too, I just couldn’t find them…

As a more robust alternative I would suggest something I call Time Out. The idea is that humans need a break from interruptions, a stress-free time to focus on just one thing.

A Time Out option is as important (actually much more important) than the Airplane Mode. It should therefore occupy the top position in Settings, maybe even automatically activated on iPhone when you switch the sound to silent.

And Time Out should mean absolute time out  a real and complete mental break from interruptions. It’s the time we go to the movies, sit for a family dinner or binge on a new series of House of Cards. Nothing other than a real emergency should penetrate our calm during time out: no sound, no home screen flashing with notifications and no vibrate. Even if I did look at my phone, the notification center should remain empty. Mentally we have to believe there is nothing waiting for us there.

The OS can expose this status to senders of notifications, so that they could update the sender, or agree on a mode for emergency that breaks through a time out.

How can notifications be improved? one way would be to upgrade the ability to take quick actions. Yes, iOS allows some actions, and Android even more, but they are still very basic and restricting.

Most importantly. User control over notifications must to be dramatically improved. Today a user can go to Settings and turn notifications on or off per app. In reality, because it’s so basic and hidden, the practical option for many users is to simply uninstall the app.

So what can be done? The setting of Notification should be exposed in context – at the point of receiving them in the notification center, and granularity can be improved by allowing each app to expose which types of notifications they send.

Here’s a rough example, where Demo App tells the OS it has three types of notifications, and the OS allows the user to manage them in context 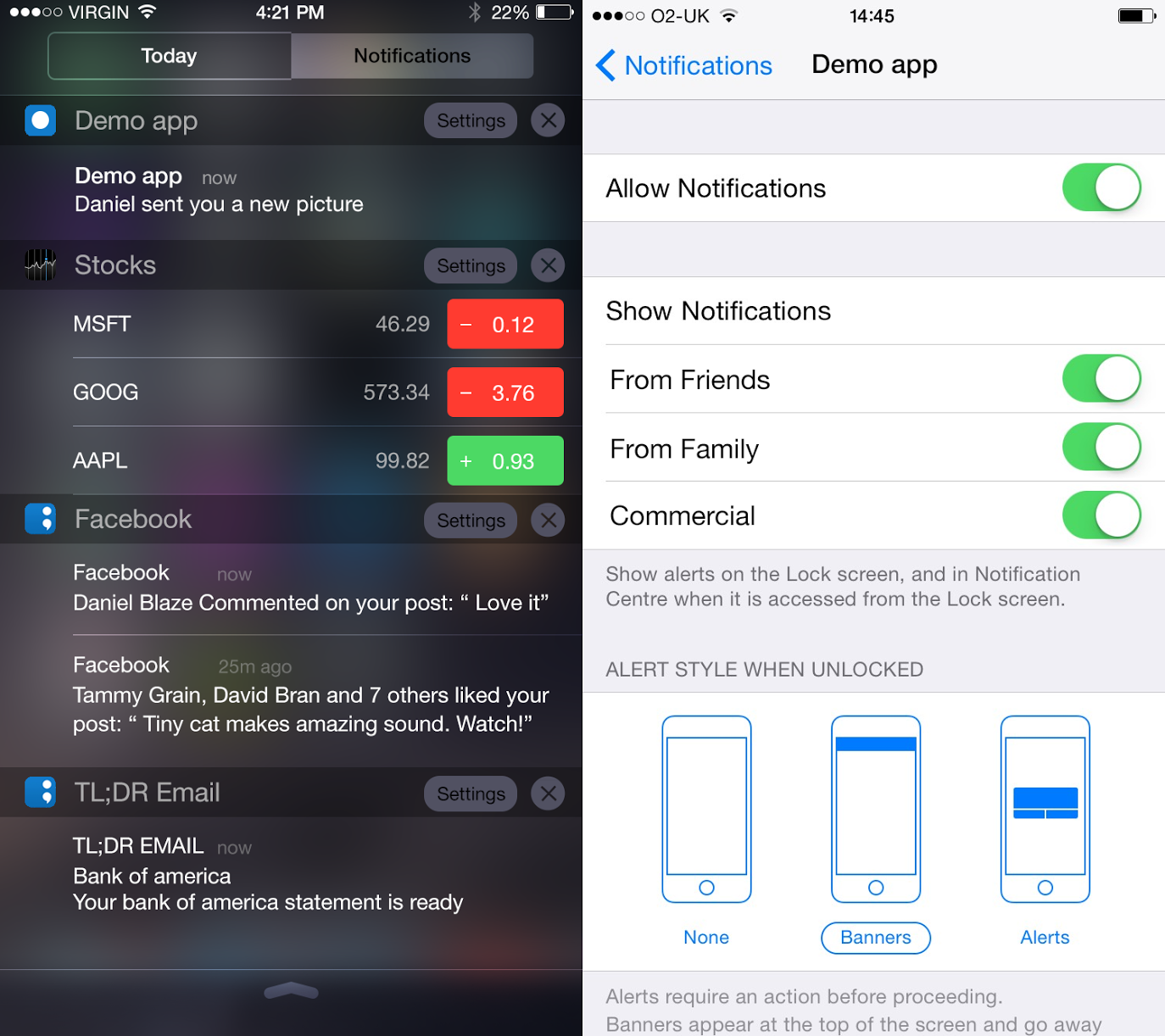 Social and communication networks and apps

Facebook, Twitter, Linkedin, Gmail, Snapchat, WhatsApp, Viber, text messages: These communication networks generate huge interruption loads. They could claim it’s not their fault, because users send the messages, not them. But we all know that’s not entirely the case. Once a user is connected to multiple networks, it becomes a huge noise-to-signal problem for the user, although each network is legitimate in sending all its notifications.

Let’s take Facebook as an example. Theoretically, Facebook does a great job (probably the best in the industry), giving users great control over notifications in the Settings. The reality is that the majority of  users keep the defaults. If we want to combat interruption overload, settings are part of the solution, but not enough.

I believe this is where context and machine learning must come into play. Think EdgeRank for notifications. Facebook could easily estimate which notification I want, and which one I don’t without asking me to control it in Settings. If I comment on a post, maybe getting a notification for every other comment on that same post is not exactly what I signed up for.

Gmail showed the way by teaching its machines to separate emails we want from commercial emails, splitting the inbox to Primary, Social and Promotions, and sending notifications by default only for Primary. It takes some getting used to, but it reduces noise dramatically — as long as they get it right.

Pure user-to-user communication networks, such as WhatsApp, are even more difficult to manage, because that’s where all messages are created by people for people. So in theory, all notifications are equal.

However, still, context and machine learning can come into play. For example, if I send someone a message and they respond, it’s probably important for me. But if I get messages from groups I never really interact with, then maybe there’s a better UX that can aggregate them, and not bother me with each one.

The last thing I’d recommend is to look at places where the user experience of the app can drive and encourage users to reduce the noise themselves.

Small-to-midsize developers do not generate as much of our notification noise, but on the phone and in our email boxes they quickly add up. For an app designer building a new experience, I’d advise that the key to generating great notifications is contextual relevancy.

A contextual product understands the complex human story around the user experience, and uses notifications to deliver what users need as well as when and where they need it — many times saving the users from searching for that same information themselves.

A true contextual product can generate what I call “magic moments,” those moments where your phone anticipates your needs and empowers you with a timely notification. A good example is a calendar app. If I’m on the street, running late for a meeting, and the calendar app notifies me exactly when/where the meeting is supposed to be – it’s contextually relevant. However, If I’m already sitting in the conference room talking to the host, the same exact notification is noise.

If your notification matches the user preferences in the correct environment with the correct information from the outside world, then great. If not, you’re risking generating “WTF moments” in which your app generates anger as a result of yet another untimely interruption. The best way to know if you’re generating magic moments or WTF moments is to measure push churn.

I will end with a new trend of notification aggregators, such as the Yo Store. It allows a publisher like TechCrunch to reach users, but only notify them when a predefined event is triggered — something relevant to those users, such as a TechCrunch post receiving more than 250 retweets.

The importance of notification aggregation in terms of reducing interruption overload is that users can pinpoint exactly what interests them across dozens of apps without being exposed to the full notification load of all of them.

At the same time, apps can still have access to those users who wouldn’t otherwise have downloaded their app, and may be interested only in a subset of their service. Whenever a market suffers from an overload, aggregation and accurate targeting are an important part of the solution.