Shift Labs is a small startup launching this spring out of Y Combinator with a lofty tagline: to be “the Nest of medical devices.” But as ambitious as that goal may sound at first, when you take a closer look at Shift Labs, it doesn’t sound that crazy after all. In fact, it seems almost inevitable.

If you’ve spent any time in a hospital, you’ve likely noticed that a lot of the equipment around looks pretty complicated, with an array of buttons, knobs, and screens. Medical device manufacturers have historically built their products by focusing on function way before form. If usability and design are even considered, it’s an afterthought at best.

Of course, some degree of complexity in medical devices is understandable. We’re not talking about iPods, here. But the founders at Shift Labs say there’s often an ulterior issue at play as well: profits.

According to Shift, by building products with the maximum amount of bells and whistles, medical device makers also ensure that they will fetch the highest possible selling price from hospitals (and the insurance behemoths underwriting much of their spending.) These machines then also come with the assumption that they will require additional add-ons, such as special training to operate, for which the manufacturer can also charge money.

Unfortunately, this means that many medical devices are only affordable to hospitals with deep pockets.

“I once had a VP of a medical device company who took me aside and said, ‘We could make simpler and cheaper devices, but then our revenue wouldn’t support our sales force,'” Shift Labs’ CEO Beth Kolko told me in a recent interview along with her co-founder and CTO Koji Intlekofer. “There is no reason why we can’t make products for nurses and medical practitioners that they enjoy using. But no one is building products for the people who are going to be providing the care.”

So Kolko, an academic-turned-entrepreneur and a professor of Human Centered Design and Engineering at the University of Washington, teamed up with mechanical engineer Intlekofer to build a different kind of medical device company.

Shift Labs is founded with the principles of prioritizing elegant design and intuitive usability from the get-go (hence the Nest comparison in its tagline.) By doing so, the company aims to pioneer a new “middle class” of sorts in medical device offerings, filling the space between the market that buys complicated and expensive medical devices, and the growing number of healthcare providers around the world that are forced to do without them altogether.

Shift Labs’ first product is DripAssist, a very simple take on an infusion pump for monitoring IV drips. Typical infusion pumps can cost anywhere from $5,000 to $15,000, so many hospitals and clinics save them for the most in-need patients, such as the elderly or young children. For the patients without a pump, medical staff are then forced to assess IV drip rates manually, by counting the number of drops over a certain time period and doing the math to determine how many milliliters of fluid per hour is being delivered. This leaves a lot of room for error, with potentially life-threatening repercussions. 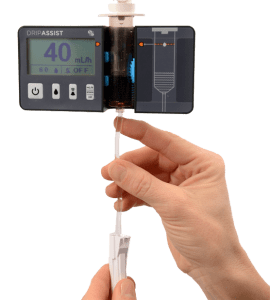 With a suggested retail price of $225, the patent-pending DripAssist aims to provide a much-needed intermediate device for monitoring the flow of IV fluid. The device, which runs for days on one AA battery, does not pump fluid at all, but simply monitors the pace of the IV drip, and sounds an alarm if it goes above or below a set rate.

As for training, ShiftLabs has designed its product to be as intuitive as possible, but also plans to provide easy to follow instruction manuals and video guides that can be accessed through an Android or iPhone app.

“Everybody from the nurse and veterinarian in the United States to the clinician in Uganda is going to have a cell phone, so we don’t have a team of representatives travel to train people on-site,” Kolko says. “That wasn’t true just a few years ago.”

Right now DripAssist is being sold in select international markets, and also for veterinary usage. It is working toward securing FDA clearance so that it can sell in the United States.

Though the idea of cheaper and more accessible medical devices and medicines is often associated with global aid and philanthropy, Shift Labs is very clear about being a for-profit company. Shift’s founders say they see massive revenue potential by tapping into a terribly underserved and quickly growing market.

“The places where healthcare is growing fastest is outside of traditional hospital settings,” Intlekofer said, pointing to the rapidly expanding market of home healthcare programs, outpatient clinics, and emerging international locales. “The traditional United States hospital industry is a very complicated environment, and for now, we’re just sidestepping it to focus on making things for this much wider opportunity.”

It makes so much sense that you wonder why existing multi-billion dollar medical device makers haven’t already, well, shifted their focus to address the market. Kolko and Intlekofer say that a couple of corporations in the space have created small offshoot divisions focused on making simpler and cheaper products. But, they say, these efforts have generally been operated with a charitable outlook toward non-profits in the developing world, not as a serious business in itself.

Also, these efforts are simply redeploying the same designers and engineers who have been steeped in the traditional medical device landscape for years. Shift Labs is coming at the problem with fresh eyes.

“It’s the same people that are making these other products, and they are so used to just doing the feature creep thing. They’re not starting from point zero and saying, ‘Is this what people want? How do we build it in such a way that it fulfills the necessary function?'” Kolko says. “This is where, being a startup, we have an advantage.”

At the moment Shift is keeping mum on the other products it has in its pipeline, but it will be exciting to see where it turns its attentions next. Shift, which is in the current class of Y Combinator, has secured seed funding from YC and several angel investors.