While connecting devices in the home to the internet creates all kinds of interesting possibilities, the concept still has a ways to go before it really enters the mainstream — and there are a number of obstacles, according to Quirky CEO Ben Kaufman.

“In general there is a belief that the internet brings functionality to devices you could not have without it. Trying to crack the code is interesting. We’re not super there yet, and not just Quirky,  but everyone [in this space],” he said in an interview with Andreessen Horowitz partner Scott Weiss at South by Southwest today.

The first issue is installation. Ideally you open the box, plug it in and you’re done, but in reality there are a number of issues. A product like an internet-connected lock could require taking out your old lock, drilling a hole and installing the new one. A smart thermostat like Nest could still require connecting wires. Not everyone is going to be comfortable doing that, Kaufman explained.

The second problem is what Kaufman called “provisioning.” Once you figure out how to install the product, there has to be a way to connect to the internet. There is no simple way to connect to WiFi just yet — and that could be a huge leap for some people.

The next problem is battery life. Kaufman joked his company developed a smart egg tray that needed new batteries more often than most people needed eggs. He pointed out if you have to change the battery on three door locks and 25 window locks every six months, you aren’t going to be a happy customer.

And they’re competing with simple devices like the light switch that almost never requires any type of maintenance. It just works. It doesn’t require changing batteries or software upgrades. 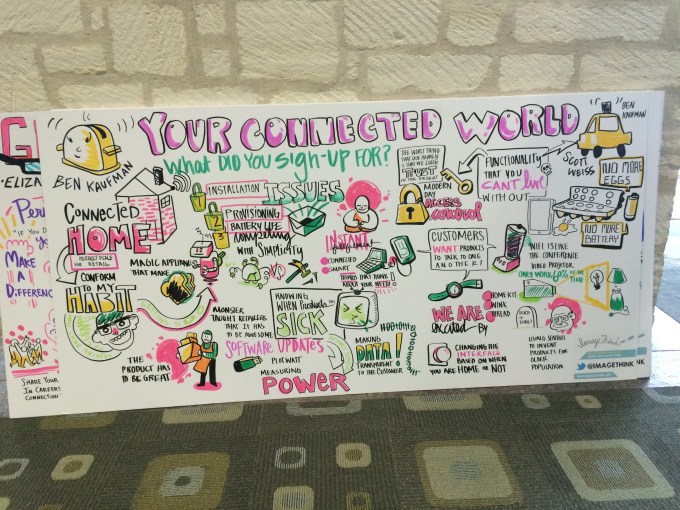 “Whenever you can use data to make the interface simpler or more transparent, that’s where it gets interesting. Now we are displaying information and customers need to act. Fast-forward 12 months and you [could] get a report and click a button to save x dollars a month. Instead of changing settings manually, [we need to] use data to make the process programmable [and begin to automate it],” he explained.

As one questioner put after the talk, how do you get to the point so that your grandmother can use these devices? They’ve got a long way to go from that perspective.

Security is another big issue when you get into smart or connected homes, whether it’s protecting these devices from hackers or data privacy. Nobody wants a hacked smart lock or to share data about their heating and cooling, electricity usage or their comings and goings with a device manufacturer — and organizations that sell these devices have to tread carefully here.

Kaufman said another problem was simple education at the retail level. DIY store employees with years of experience selling traditional products, need training to sell newer connected products. Startups with small budgets might not have the money to create these programs to get retail staffs up to speed.

Kaufman said his company, which has partnered with General Electric, was launched with the idea of making inventing more accessible. It relies on its community to help develop new products, and to-date it has had various degrees of success. In around 2013, it began concentrating on smart connected devices after a vast majority of the submissions had internet connectivity.

While it has given a forum for inventors to create and market products, the company has reportedly lost $100M since launching.

Weiss likened the connected home evolution to the early days of the PC. We might be past the hobbyist stage, but it still requires a certain level of technical aptitude to make these devices work. Until you automate big portions of the process, connected devices will remain in the realm of nerds for now.