The doctor behind those “doctor-recommended pills” is most likely someone who is paid to tell you that something will work for you whether or not it actually will. That’s why on-demand digital health app HealthTap says it undertook a project to gather the drug recommendations of over half a million medical doctors and put them together in a new initiative called RateRx.

HealthTap is known for offering on-demand patient treatment services through its app. RateRx launches as a new service on HealthTap that will be a sort of Yelp-like, doctor-recommended drug-review database.

HealthTap says RateRx is the first independent resource enabling U.S. doctors to weigh in on “a large-scale evaluation of medications for treatments.” It’s not, exactly. But it is the first to offer this information for free on a smartphone.

The startup has compiled thousands of doctor-rated drugs and added them to the RateRx database. Currently, doctors review medication treatments for conditions such as acne, arthritis, anxiety, diabetes, headaches and hypertension. 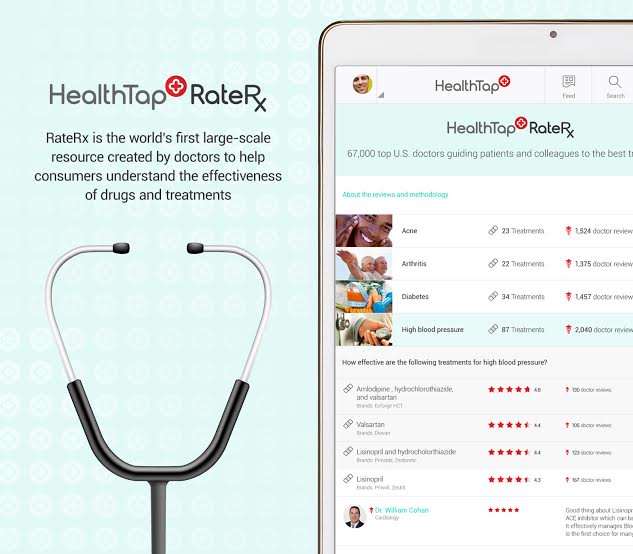 First Databank MedKnowlege claims to be “the most widely used and relied-upon drug knowledge base in the United States and Canada.” It provides recommendations and insight from pharmacists and other healthcare professionals for a fee.

There are also several drug database apps on the market. These mostly offer information on drug interactions and side effects.

There are plenty of other drug rating sites for those who don’t trust the combined doctors’ recommendations. Sites like WebMD provide a platform where patients can add their own comparative experiences and interactions with the drugs.

HealthTap plans to stick with just the doctors’ recommendations. “It became evident that doctors were in a better position to share their educated and experienced views and recommendations on the efficacy and quality of medications based on years of experience prescribing medications and seeing their efficacy with a huge number of patients,” HealthTap founder Ron Gutman said.

The plan moving forward is to include more doctors within the ratings platform. RateRX is available starting today on the HealthTap iPhone, iPad and Android apps.