Nokia — now independent of the handset division that it sold to Windows Phone maker Microsoft last year — is today passing a milestone in getting remaining services to work across multiple platforms. The company has finally brought Here, its mapping app, back into the iOS store after removing it in late 2013.

Competing against the likes of Google Maps, Apple’s own native Maps, and literally hundreds of other navigation apps, Nokia hopes to bring new users into the fold with its free app that includes a bunch of features, from navigation directions for cars, walkers and public transport users; suggestions of places to visit; and offline maps for 100+ countries.

The last of these features is particularly interesting: in current apps on Android and Windows Phone, more than half of current users use this feature regularly the company tells me, with the proportion growing all the time. Key to the offline feature is that the maps are fairly extensive and not simply small caches. (Although this also eats up space on your phone if you choose to have them.)

At least at first, Here will be without a few bells and whistles: while the core features for offline usage for example will be the same, extras like venue maps are missing for now.

In my usage of the app, I’d say my experience was smooth and so far without hitting any bumps. For a person living in London, the in-car navigation is a leg up on Google’s with more detailed traffic information than what Google Maps offers on iOS in this market.

There are challenges and opportunities up ahead. Here is coming late to world of mapping apps for iOS and after a long absence from the iPhone. It originally launched for iOS back in 2012, but it was pulled in 2013 after compatibility issues with iOS 7.

The iOS app comes on the heels of Here expanding to Android last year — an app that, according to Google Play, has been downloaded somewhere between 1 million and 5 million times. But the app originally launched as a native app for Windows Phone, at a time when Nokia was still a handset maker building devices on Microsoft’s OS.

At the time, the company had very bullish plans on how location would the lynchpin of how people interact and use mobile devices. That, in fact, has proven to be the case, with a myriad of apps using location to power their very services — whether they are based around transportation (like Uber) or social interaction (like Foursquare) or commerce (Amazon Local being just one example). 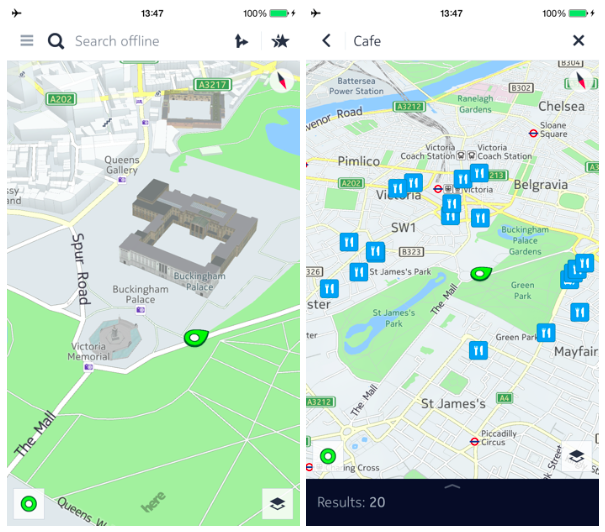 It’s debatable whether Nokia has so far been the winner in the landgrab for location services users (pun intended), but apps and users are both moving targets, and so there is still plenty of space left for growth and movement.

And hopefully monetization. In Nokia’s most recent quarterly report, the Here division saw revenue up 15% to €292 million, but operating margins and profits both decline.

One way that Nokia could tackle that might be through advertising — for example sponsored results — but another may be in enterprise sales. The company already works with car makers to modify Here to work in vehicles, and it also has deals with Oracle, Amazon, SAP and FedEx to power customized maps for these businesses.

And as companies like Uber, for example, get more focused on how they could build out their own location services to better support their ever-expanding empire, it’s worth considering how Nokia’s mapping business may evolve.

I spoke with Patrick Weissert, director of consumer experiences for Here, to ask a bit more about the app and Nokia’s plans for how it will develop:

Everything is free now and no visible use of ads anywhere. What is the plan for monetizing and when will you be introducing that?

Our first goal is to build a great product and scale it, and in doing so increase awareness and usage. Greater usage helps us further improve the experience through the feedback we get. We have no plans to monetize the app at this time.

It’s worth keeping in mind that we are also leveraging our consumer investments across our enterprise and automotive businesses. In automotive, if you look at North America and Europe, our maps power four of every five cars with in-dash navigation. We are building on that strong relationship with the major car companies by offering location services for drivers across multiple screens (see e.g. our work with BMW). For instance, a driver can plan her route on a tablet the night before a trip, sync to the car so everything’s ready when she sets off, and even get last mile guidance once she’s parked her car and is continuing on foot.

Why wait this long to get maps on iOS?

It ties back to wanting to deliver a great product. We continuously tested the app over the last few months and we now have very positive user feedback from these tests, so we felt that now is the right time to release.

What’s the plan with adding in more sources of info for place recommendations? Everything I’ve happened to try so far links to TripAdvisor.

We have a wide range of additional sources we will be bringing to the apps over the next months. You can already see many of these on here.com. In general, we aim to surface the best sources for the use case and the region, so results may differ depending on where you are, and where you are searching.

In the existing rollouts of the Here app, can you tell me how frequently the offline maps are used?

More than half our users are using the feature, and this share is growing continuously. There are a lot of scenarios where users find this useful – on the tube, in places where you don’t have reception, when travelling, or if you have data caps with your operator. It also vastly increases the performance and responsiveness of the app, which is why many users say they like the app.

Can you tell me the progress of getting developers to use the Here API? Specifically, how many are using it for mobile apps right now, and on what platforms? And what are the most popular apps using it?

Microsoft, Amazon, Deutsche Telekom, Ford, and BMW are among the companies whose developers are using the Here API.