The Apple Watch is set to be the star of Apple’s special event on Monday in San Francisco, putting us in the rare position of actually knowing a lot about what’s coming in advance.

That’s because Apple officially introduced the Apple Watch to the world last September at its special iPhone event, even showing off working hardware (and letting journalists like us try on versions of the Watch running locked demo loops of its software). Monday will still offer plenty of surprises, however, so here’s a look at what we know, what we expect, and what we’d like to see but probably won’t.

Apple’s wearable will come in three separate collections, including the “Watch,” “Watch Sport” and “Watch Edition.” The Sport model will be the most affordable, offering an anodized aluminum case, special strengthened glass Apple calls “Ion-X,” and shipping with plastic bands in a variety of bright color options designed for active use. It’ll start at $349, and will be the most affordable of the three different collections. 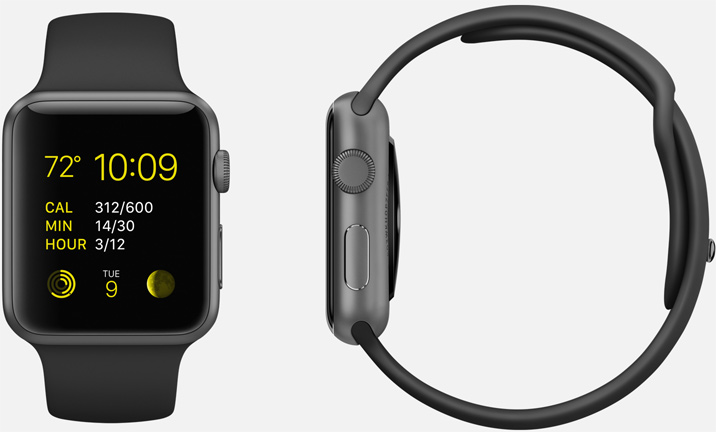 Apple Watch (the naming scheme is not Apple’s most clear) seems to be what Apple will use as the “default” option, analogous to how the iPhone 6 could be said to be its primary flagship, with the iPhone 6 Plus as a slightly more premium model, and the iPhone 5s and 5c as more akin to the Apple Watch Sport. The Apple Watch’s pricing will be a key thing to watch, and could vary depending on bracelet and band options.

Apple Watch Edition comes in six variants, with 18-karat gold cases Apple says are actually engineered to be twice as hard as standard gold, which is one of the softest metals, so that should help it be more resistant to scratches. Sapphire glass is again the material used for the front face. Strap and buckle options are actually more limited vs. the Apple Watch collection, but the unique use of both gold and rose gold hardware to match the case finish options sets the accessories apart. 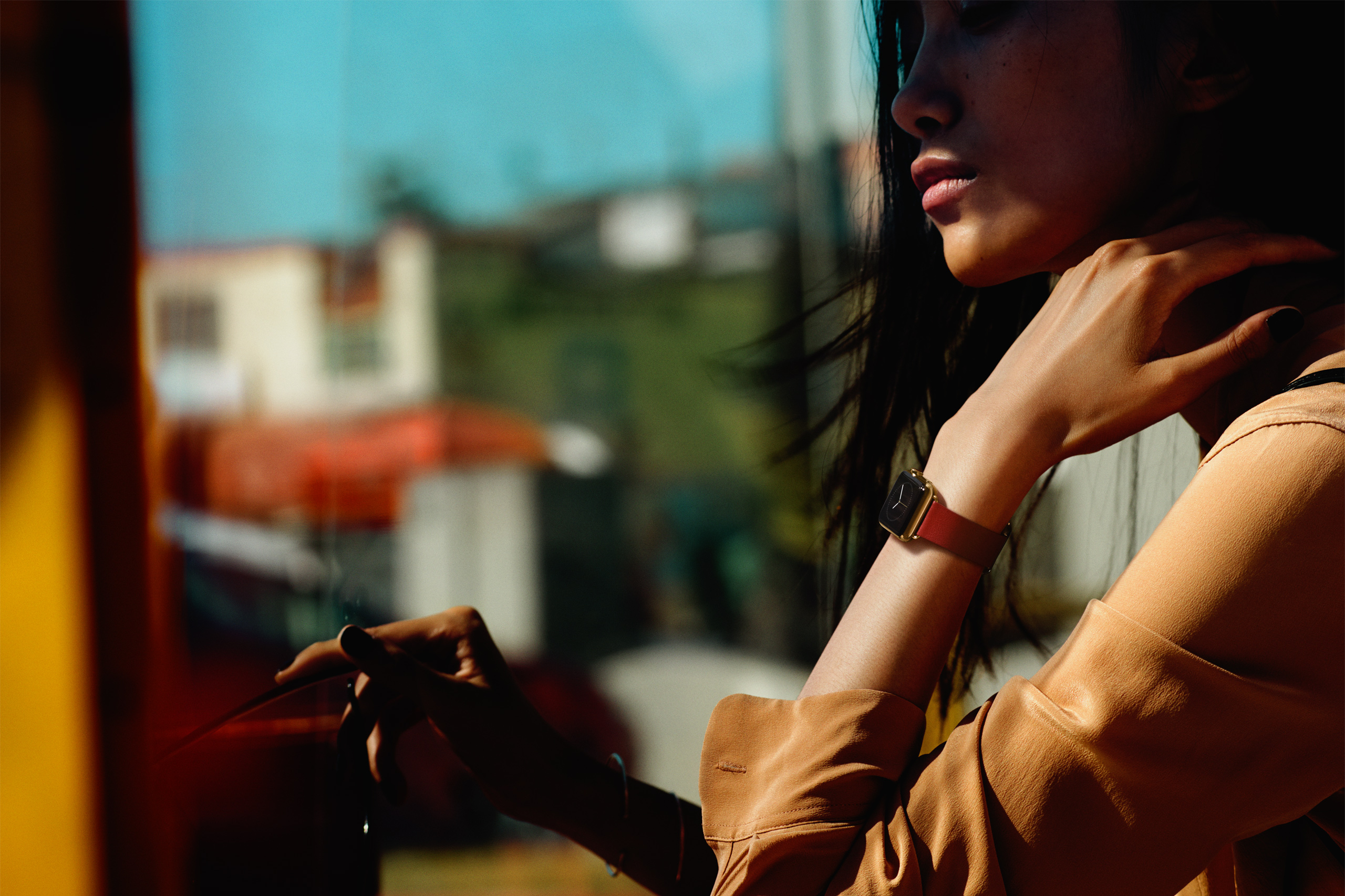 All Apple Watches share in common a choice between a case size of 38 or 42mm,  which are both smaller and slimmer than what you might be used to with the existing crop of smartwatches. Based on when we saw them in September, I’m inclined to favor the smaller size, but the fact that both exist is a clear sign Apple wants to make sure Watch appeals to a wide range of tastes.

The digital crown is another key feature of the Apple Watch. It offers a physical input mechanism for the wearable, with rotation controlling zoom, and a push acting as a Home button to let you return from any app to the home screen. Apple has of course included a touch-enabled screen for direct input, but the digital crown is an incredibly addition that accommodates the smaller screen, which would be obscured completely using multi-finger pinch-to-zoom gestures. Tactic feedback, which is a new twist on the kind of physical vibration feedback we’ve come to expect that is surprisingly intimate in real life (like a human tapping you on the wrist) is another big tentpole hardware feature.

In terms of this event and the Apple Watch basics, what will be most interesting to learn will be the specifics of battery life, which Apple has only vaguely described as suitable for a day’s worth of use. We’ll also get more information on just how water-resistant the gadget is. It’ll be very interesting to see how, if at all, the Apple Watch’s physical design has changed since its original introduction – Apple is unlikely to have ventured very far from what we’ve seen, given that the Apple Watch has been photographed plenty and is plastered all over its website, but subtle changes may have cropped up in the intervening months since its unveiling.

One of the most frequently discussed unknowns regarding the Apple Watch is the specific pricing matrix Apple will use across its collections. From Apple, the only official word has been that $349 starting price for the Apple Watch Sport. A report claiming that the Apple Watch collection would start at the same level was shot down by Apple PR, so it’s likely that things will kick off there for at least $150 more, if Apple sticks with a pricing model similar to how it handles other iOS product lines, but don’t be surprised if they’re even as high as $600 to start.

As for the Apple Watch Edition, pricing estimates vary considerably. Our own John Biggs estimated at least $1,200 to start, and most guesses since seem to peg $2,000 as the bottom end, with ceiling estimates ranging as high as $20,000 depending on options. The steep pricing is mostly coming from sources familiar with the existing luxury watch industry, where four-figure pricing is actually on the low end. A solid 18-karat gold case alone at the very least merits breaking the $1k mark, according to many of these experts. The Apple Watch Edition also comes in a box that’s leather-cased and becomes an accessory holder for the wearable, too. 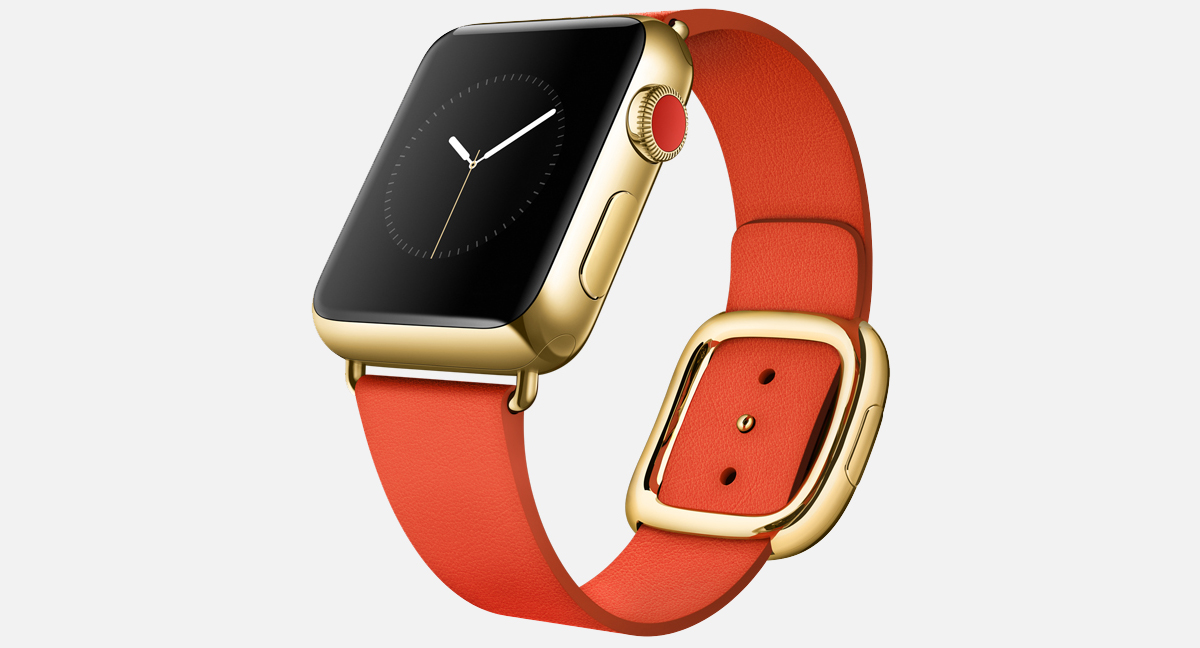 Pricing a device that high, especially when most anticipate it will have an update cycle similar to the iPhone, may seem like a touch of madness, but Apple is clearly trying to court the luxury and fashion market with this new hardware. Pricing in those worlds plays by different rules: Many are happy to pay a lot for something that offers additional cache for its wearer, regardless of how it compares to cheaper devices in terms of pure functionality. Device pricing for the Edition line might not make “sense” for Apple’s gadget-loving crowd, but it is a logical course for it to take when pushing further into the high-end luxury market.

A second stage appearance for the Apple Watch could afford Apple the chance to talk about how it will sell the new wearable – rumors and reports have suggested changes in the works at Apple Stores and among front-line retail personnel, with new security measures such as special safes for overnight and Edition storage, and new hands-on areas where customers can sample the various personalization options available with Apple watch first-hand. 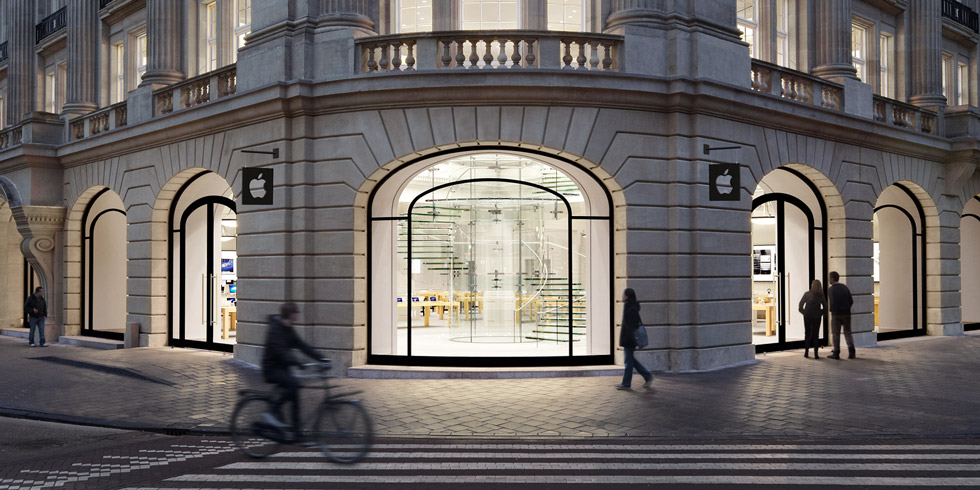 A retail renaissance may provide Apple with more opportunity to chase those higher-end customers across its line, and recent reports suggest its retail staff have been instructed to sue the Apple Watch as a means to talk about and try to promote the iPhone to potential buyers as well. Selling the Apple Watch may be a case of “come in for a phone, leave with an accessory” to many, but it could also be that a “come in for jewelry, leave with a phone” situation becomes commonplace as well.

Apple’s MacBook Air is reported to be getting a new addition, a super-slim device with a 12-inch Retina display, and a single port in the interest of battery and space conservation. This device was first unearthed by 9to5Mac, and has been a bit of a moving target in terms of pinning down its release date.

Current theories about how it might operate include Apple supplying a first-party hub to give it additional port power, and it featuring a trackpad that does away with physical click to help keep the shell so svelte. 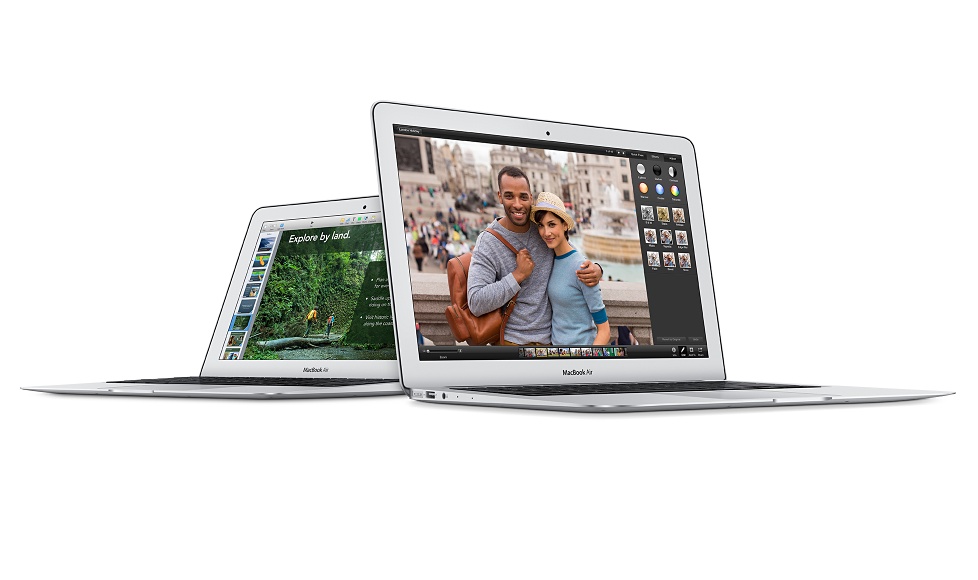 It’s about time that the MacBook Air got a significant refresh, and a 12-inch model with an extremely small physical footprint would definitely be an exciting device. Most argue that this would be a computer with a fairly steep price tag, however, and probably something with more niche appeal for those seeking extreme portability at the cost of other conveniences like plenty of I/O options.

The latest rumors suggest we might see the MacBook Air make a debut at the event, but not necessarily ship right away. Apple could also easily save this particular reveal for WWDC, which has the added benefit of keeping the spotlight squarely focused on the Apple Watch.

Other Macs (and Mac Accessories)

Shipment times indicate we might see updates to the existing MacBook Air model, as well as possible to the 13-inch MacBook Pro, which would make more sense in terms of an update alongside the Apple Watch (that wouldn’t steal its focus). If this happens, expect a processor bump, as well as improvements in base configuration specs, but not much else.

One outlier possibility could be the introduction of some kind of replacement for the existing Thunderbolt display. After the Retina 5K iMac was introduced last year, many have been waiting for a standalone display with similar resolution. Apple has just begun listing its MagSafe to MagSafe 2 adapter as “Discontinued” on its store site, which could be an indicator that it’s planning to debut a monitor that comes with MagSafe 2 power out of the box. Still, this is definitely a long shot, as we’ve heard little else about the possibility of a display refresh. 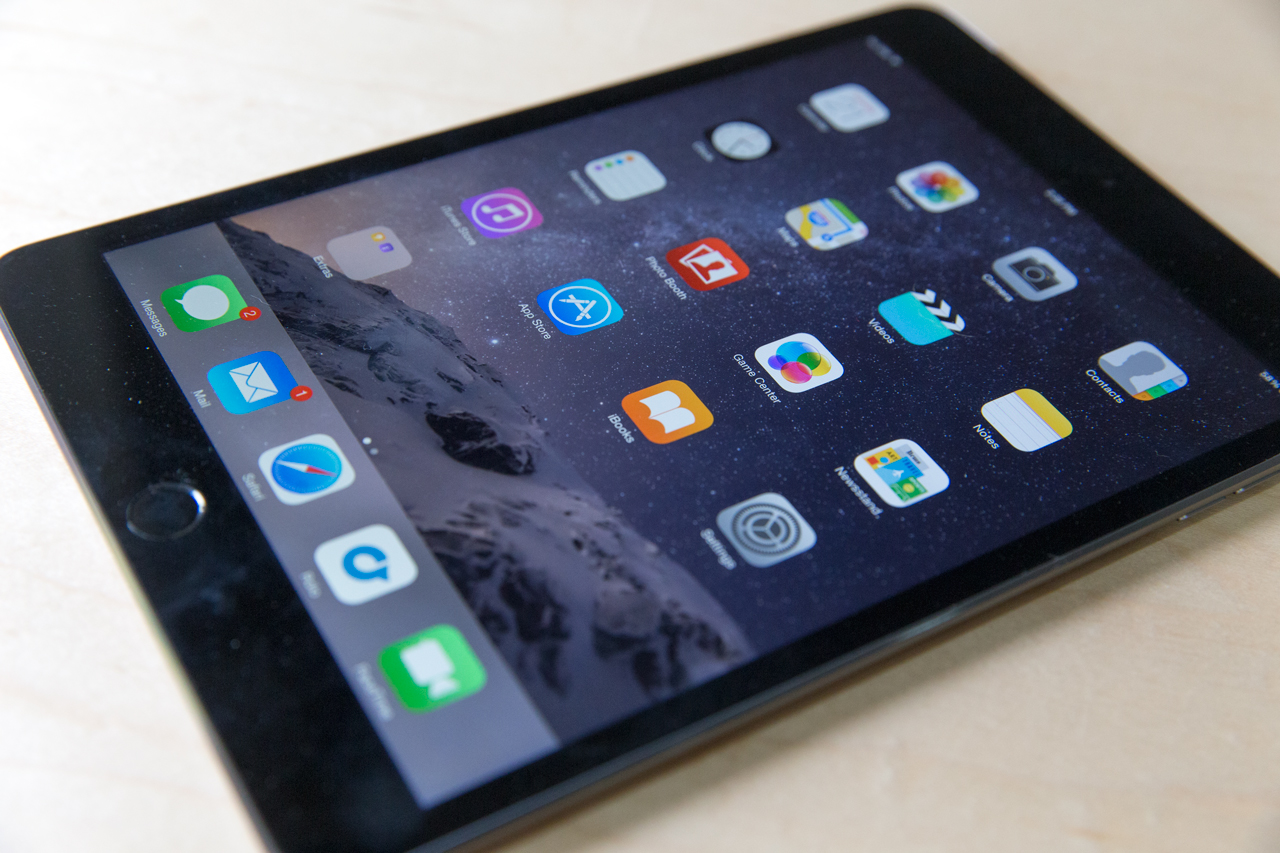 Another long shot, the iPad Pro with its supposed 12.9-inch screen seems to be supported by enough rumor “smoke” to indicate that there’s product “fire” behind it. But we’re unlikely to see it at this event specifically – new reports out earlier this week suggest Apple is more likely looking to fall as a target launch date for its larger tablet device.

In the end, the Watch is what this event is all about, and Apple still has plenty of story to tell regarding its new device. The wearable is a decidedly different product from anything it has launched before, and the company’s media strategy has been demonstrably different in every regard right from the time it was first made official. Monday’s event will clearly be one like no other in Apple’s history, so be sure to join us right here when we kick things off for the 10 AM PT start time.