Wondering how to make a Moscow Mule or a Margarita? Google this morning is rolling out a new search feature that will tell you how to make any cocktail, offering step-by-step instructions, a list of ingredients, and even serving suggestions like type of garnish or drinkware. The addition is one of many ways that Google is trying to turn its search service into more of a virtual assistant for its users – and especially its mobile users – by offering the answers to common questions ahead of its actual search results.

In the past, Google has added other useful information to its “Knowledge Graph,” as this semantic-search base is called, which is used to supplement the organic search results with summarized information drawn from the web. Initially, the focus was on answering queries about persons, places or things – factual information – but, over time, it’s been able to respond to even more complex queries. For example, last month, it introduced relevant medical facts in response to users’ queries about common health conditions. 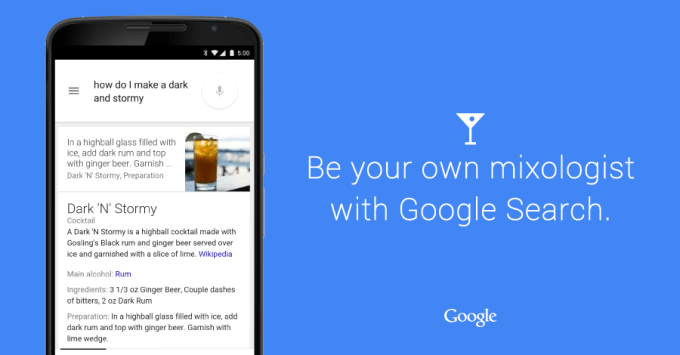 The cocktail query, while maybe not as important in the grand scheme of things, is notable because there’s not necessarily only one way to make a drink. Instead, Google is actually figuring out which is the most preferred and popular cocktail recipe, based on search data. The company explains that the information on the cocktails come from a variety of sources, including both content sites and resources like Wikipedia, and the information is cross-checked in order to find the most consistent recipes and instructions. When one particular site is used for the recipe, that’s linked in the results.

In addition, the search feature is updated constantly in order to keep the recipes “fresh” based on its data sources and what people are searching for.

Because the feature is powered by Google’s Knowledge Graph, it will work on both the desktop and the web. But Google thinks the mobile use case is more compelling – that is, it makes more sense that users may pull out their phone while at a bar, when trying to decide what to order. Or they may just be trying to make their own cocktails at home, like while hosting a party, for example.

To use the feature in Google’s mobile app on iOS or Android, you just press the mic button and ask, “OK Google, how do I make a….?” 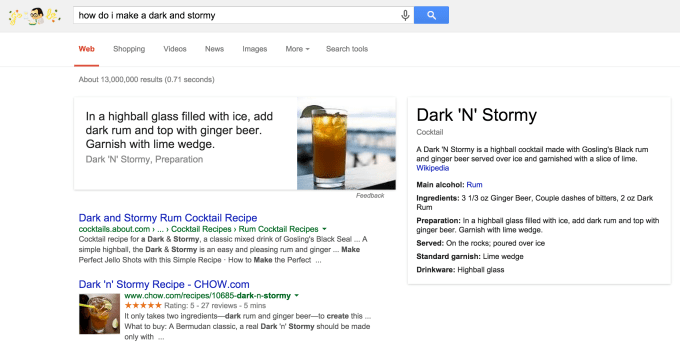 Google says that people today search for a broad range of topics on its site – 15% of searches it gets every day are new – and it wants to help answer those questions, no matter how specific. The feature arriving today is only for drinks, not food recipes, but Google already has implemented search tools that aid with those searches. While not a part of the Knowledge Graph, Google already lets you narrow down recipe choices by ingredients, cooking time, calories, and more, and for some foods, instructions are also provided.