Parrot has a brand new drone on the market, featuring a 1080p video camera that captures motion at 30FPS, and that can take stills at 14MP. The camera has built-in stabilization, letting it avoid the kinds of shakes and jitters that can normally add up to nausea when dealing with moving camera, and has a Wi-Fi flight range of up to 1.2 miles when flown connected directly to the new Skycontroller hardware control accessory. Embedded GPS completes the picture for a far-ranging quadcopter with plenty of amateur film-making potential.

The Parrot Bebop’s looks give away its primary function: It’s basically a camcorder with four rotors and a big battery. Those elements are packed in a sleek enclosure with nice lines, however, and color options that make the drone highly visible, which is a very smart thing when you’re making a quadcopter bot that can fly up to 1.2 miles away from its pilot, and that might, in some cases, require retrieval later, depending on its pilot’s skills.

The design is also smart in that it primarily uses materials aimed at making the Bebop both light and safe to fly, for the drone itself and for any humans in its vicinity. Its primary structure consists of ABS plastic, combined with hard,impact-resistant foam housing the camera, which is also the base material for the protective frames that snap on to save the walls if you’re looking to fly indoors. The rotors can be easily removed using an included wrench for luggage packing, and padded feed make for safe indoor landing maneuvers.

Parrot has improved the battery installation and removal situation with the Bebop versus previous consumer drones like the AR Drone 2.0. A connector is attached to a small string that lets you easily retrieve it from within the Bebop’s body, and a simple slide mechanism secures the battery to the rest of the drone chassis. A Velcro strap helps make sure the battery won’t eject, even when you’re smashing into trees and walls and kitchen cupboards (I can personally attest to its resilience in the above scenarios).

If there’s a design flaw, it might be that the fisheye design of the lens means glass sticks out at the end of the nose, which seems like a good way to set it up for scratches. Parrot has no doubt made sure that scratches are unlikely on the camera lens, and small dings likely won’t significantly affect optical quality, but the need for 180-degree field of view so that the stabilization algorithm has plenty to work with in terms of cropping down an image likely means some kind of protective hood along the outer edge wasn’t feasible.

The marquee feature of the Bebop are its photographic capabilities. The unique fisheye camera built into the drone makes digital stabilization possible, letting the drone automatically crop from the full frame to keep panning and tracking stable within the shot, no matter what’s going on with the movement of the drone itself. Anti-vibration algorithms developed by Parrot also help to ensure there’s no micro shake as a result of the rotor action. 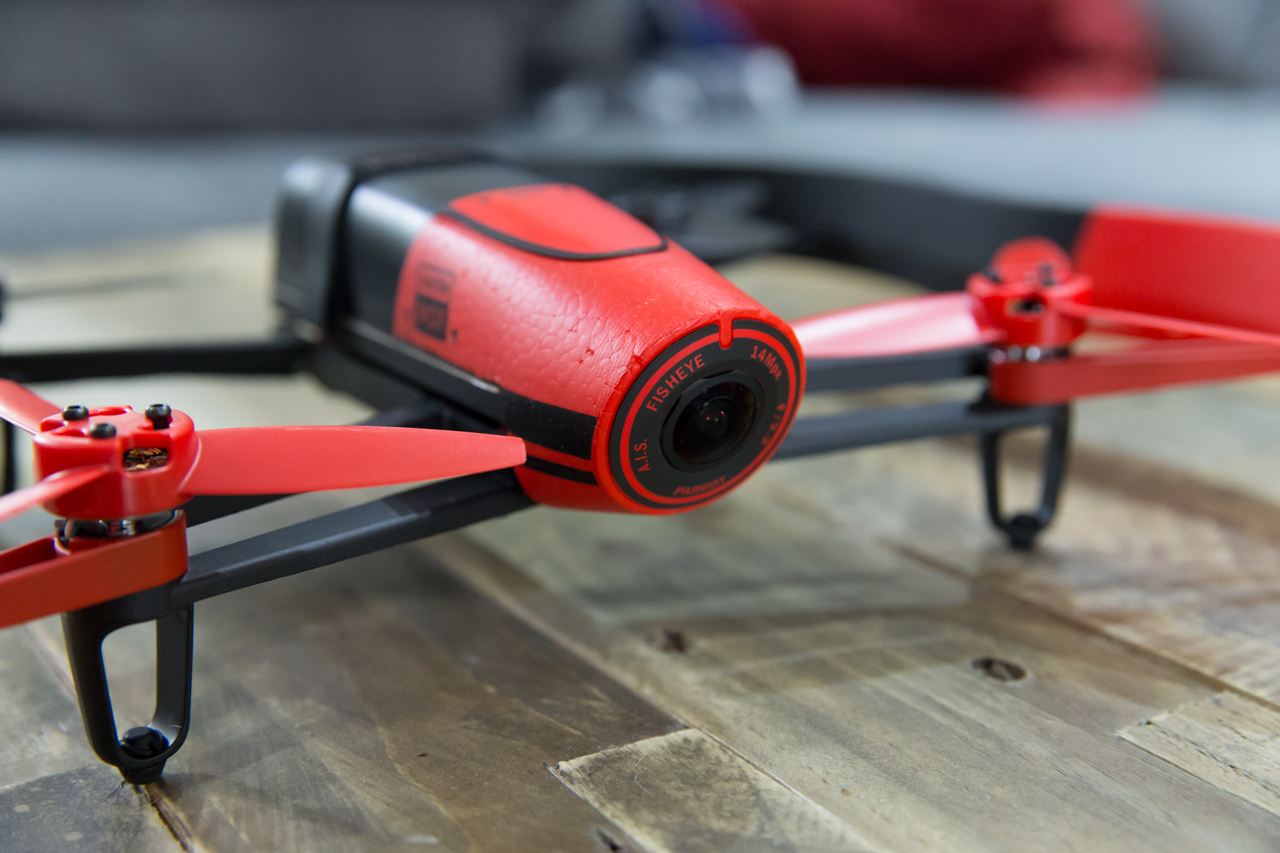 Video from the drone is quite impressive, and with some fine tuning could definitely be useful for amateur filmmakers and even pro video producers working on the web. It easily surpasses anything from Parrot’s previous line of consumer-level drones, but as you might expect, it isn’t on par with the kinds of video and photo capture possible on more expensive devices like the DJI Inspire 1 or the 3D Robotics X8+. Still, it’s a fraction of the price (and cheaper even if you opt for the pack that includes the Skycontroller) and offers plenty of great video and still capture features (like a user manipulable pan of the camera across the 180-degree FOV while the drone is stable) for amateurs and entry-level pros to appreciate.

Other features like the ability to post directly to YouTube, as well as Facebook and Instagram via photo and video stream syncing, make this an even more attractive option for hobbyists looking for a good time, and the built-in GPS is a very nice addition that lets the Parrot “find home,” which automatically puts the drone on a beeline to its point of origin if it’s above 10 meters off the ground, or has it find that height before returning to base, where it hovers at 2 meters distance from the turf until you instruct it to land.

The GPS also lets you plot out a route on a map using the new Flight Plan feature, which isn’t yet live, but is promised in a future update as a paid in-app purchase.

The Skycontroller is pretty much an elaborate feature for the Parrot Bebop, even though it adds a full $400 to the price of the Bebop alone. The Skycontroller has its own super-powered Wi-Fi network generator, extending the possible range of the Bebop from around 650 ft using an iPad or iPhone alone, to 1.2 miles. It also gives you hardware controls, which include multidirectional analog joysticks, and dedicated buttons for things like landing and takeoff, still and video capture, and a button to tell your drone to seek home. 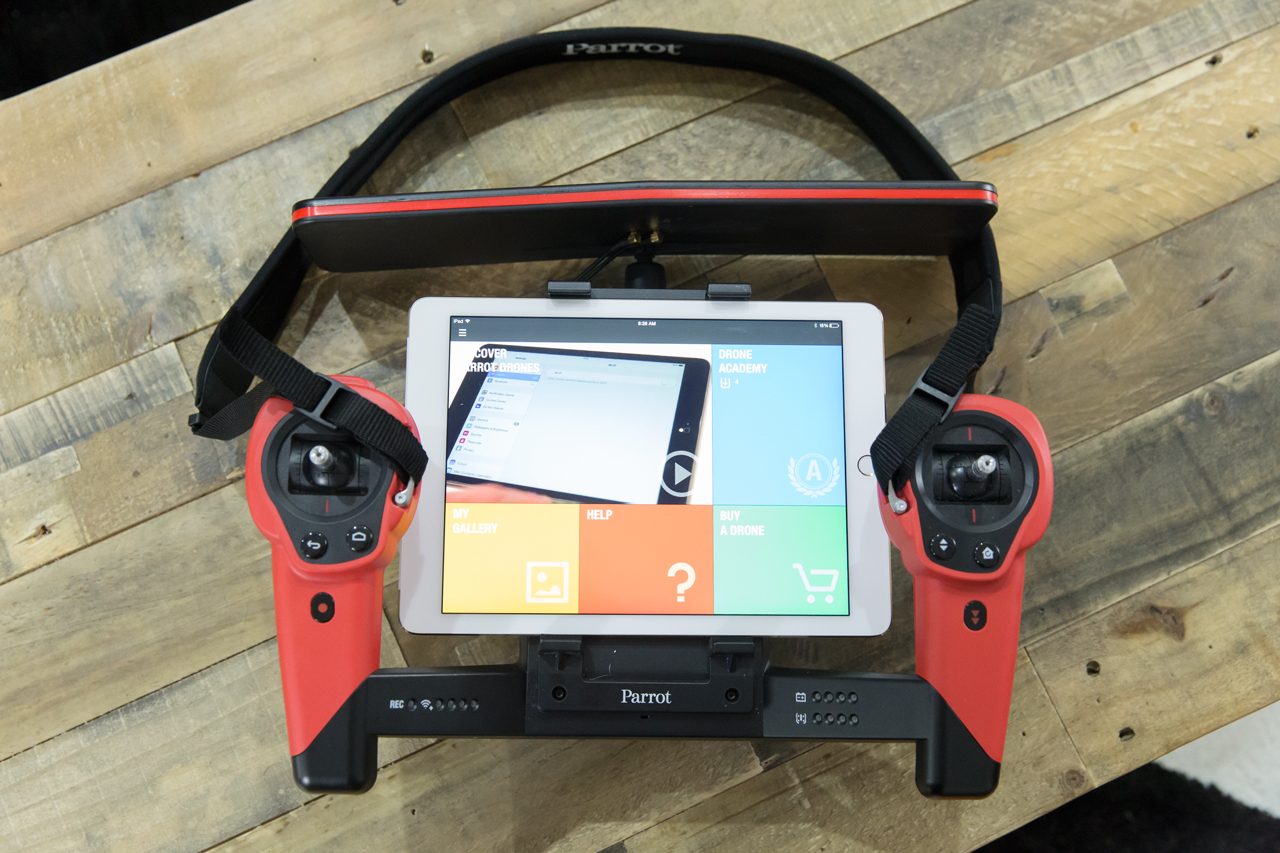 I much, much prefer controlling the Bebop with the Skycontroller. It’s akin to my feelings about the AR Drone 2.0, which I really only ever used via the Nvidia Shield tablet, since, try as I might, I just can’t get good enough at touchscreen controls to feel comfortable with drone operation, especially in the kind of cramped environments where I normally find myself using them. Plus, the Skycontroller works with a range of devices, including tablets and smarthphones, can work on its own independent of external devices, and comes with a comfortable neckstrap, plus a sunshade to avoid losing tablet screen visibility.

The Parrot Bebop drone, like most others I’ve tried, took a while to warm up to. Initial testing quickly revealed that I would need to get accustomed to the sensitivity of the Skycontroller’s controls, vs. touchscreen input and what I’d previously come to expect from using the Shield Portable with the Parrot AR Drone 2.0 The good news is that seemed to be because the Skycontroller was very highly attuned to subtle changes in input, meaning once you get used to controls being more refined, it’s fairly easy to wrap your head around boosting your piloting abilities.

The built-in GPS features, including the return to home function, performed well in testing and add some piece of mind to pilots like myself who might feel strange about letting the drone wander too far. I was still reluctant to really push the limits on the extended range and height capabilities of the Parrot Bebop, in part because I didn’t end up being able to make it to a test environment where the device could really stretch its legs. 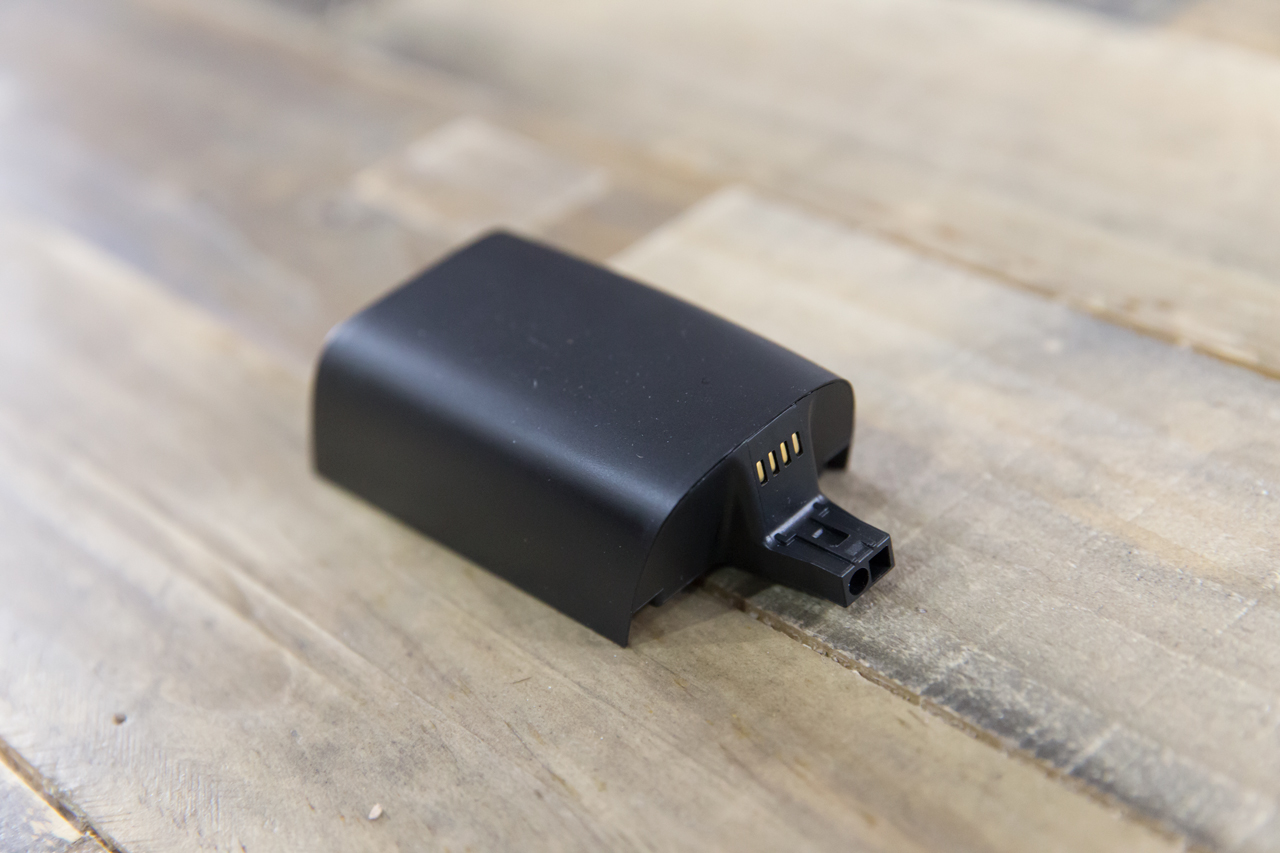 Battery remains a concern, since 11 minutes is not a lot of time to get from one charge. The Bebop ships with two batteries, however, so you can get 22 minutes from two fully charged packs. In practice I found I got 10 minutes or so as expected in general. I’d still like to see this improved, but given how much processing is going on inside the Linux-based computer and high-power camera combo that essentially makes up the Bebop, beyond its actual flying powers, a short total flight time is not unexpected.

Video and still image capture is strong on the Bebop, and that’s what’s most important about the device overall. You’re essentially getting a human-independent action camera with better stabilization that can fly for $500, or $900 with the extremely capable controller thrown in. It’s a lot less than you’d pay the kind of gear you’d need to get these shots even just last year, and that’s the core value of what Parrot is offering here.

Parrot’s Bebop is still very much niche device, but it’s a niche that’s broadening vs. previous models. This is less of a toy than the AR Drone 2.0, with more practical applications including aerial photography, property surveying, amateur filmmaking and even limited professional photographic potential. That said, it’s not something you’ll be magically good at using, even with the added benefit of the Skycontroller vs. using just the touchscreen-based app. Being able to get the video and still shots you want will involve spending a lot of time mastering Parrot Bebop piloting, provided you aren’t satisfied with just shooting whatever happens to get in front of the drone’s lens. 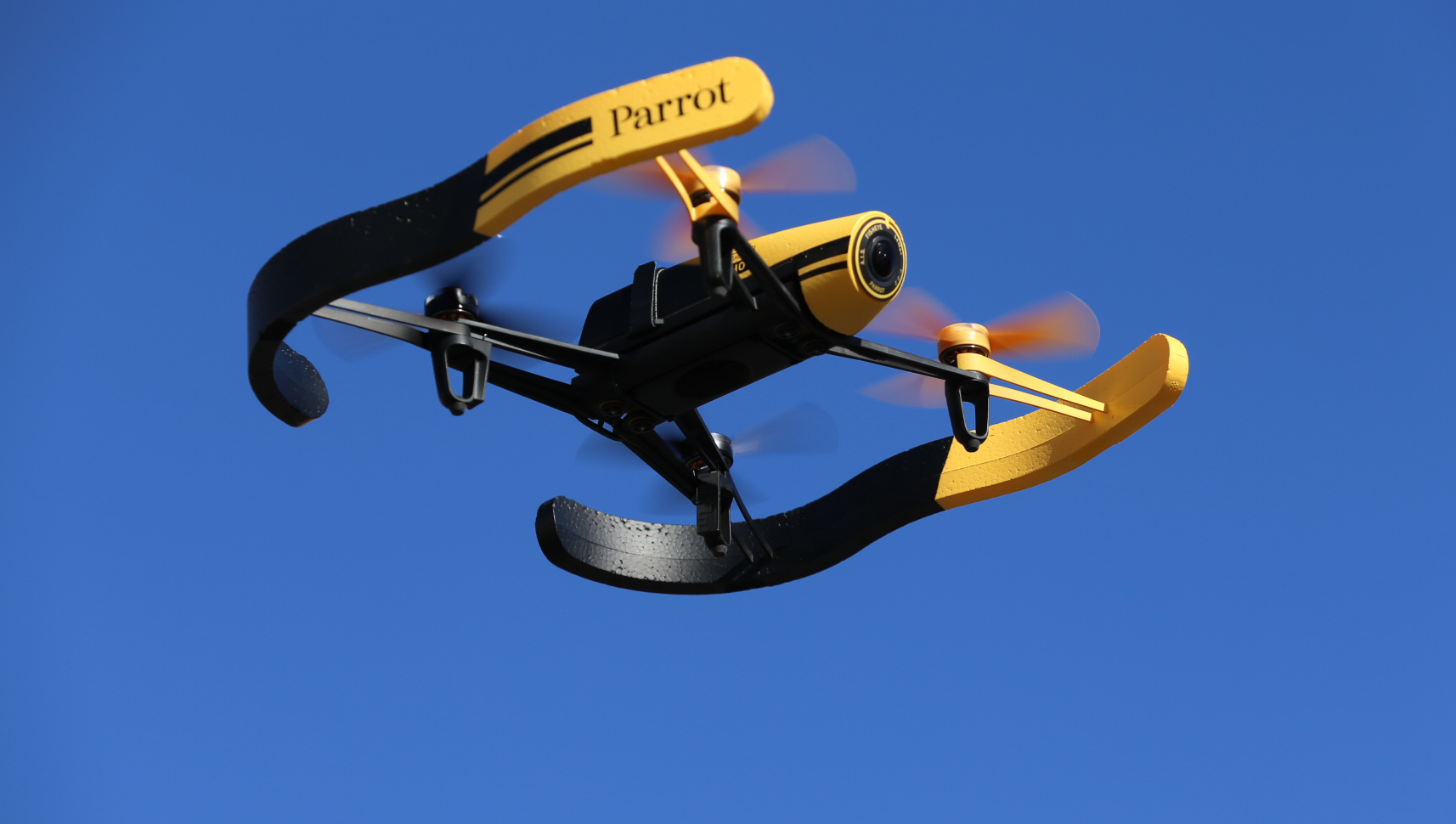 Consumer drones still have a strong possibility of being things that people pick up out of curiosity but end up using only on very seldom occasions, and even then for only brief sessions. The Bebop is probably the most useful of Parrot’s offerings to date, and the one most likely to become habit-forming, however, so if you find yourself with an avid interest in taking up drones as a hobby, it’s a good place to start.