Gradberry is launching today out of Y Combinator to connect US companies with vetted technical talent. Candidates quickly build a talent profile, connecting their GitHub, online portfolios and projects, and LinkedIn account. The talent profile is then vetted by the Gradberry team and approved candidates are passed along to specific employers.

The Gradberry of today is a result of three years of work, across several continents, multiple product iterations, two failed applications to Y Combinator and one very passionate founding team.

Founder Iba Masood is a tech nerd. From the time her family got their first computer when she was four, she has been fascinated with technology and the impact it could play on society. From tinkering with hardware to early online gaming, Masood soon found her community on the pages of TechCrunch and HackerNews.

Masood is from Karachi, Pakistan and grew up in the UAE. While in college, she met Syed Ahmed, a self-taught developer with a similar enthusiasm for all things startup. After attending university, they decided they wanted to start a company. Masood’s parents, who are in the diesel industry, encouraged her to pursue a more traditional business, “a cupcake shop, for example.” Ahmed’s family had much of the same reaction.

Despite this, Masood and Ahmed persevered. The pair saw an opportunity in the widening skills gap and began to develop courses teaching skills in high demand by local employers. Unlike other attempts at online education, whereby candidates take a course and only then can apply to a job, Gradberry switched the model on its head. Candidates could apply, but when they were deemed unqualified, Gradberry provided them with courses to improve.

For nearly two years, Gradberry existed as a regional business. They were profitable but the sales cycle to bring on employers was slow and the market limited. To grow their business outside of the UAE, Masood and Ahmed knew they needed funding.

But while there is a nascent tech scene in the region today, three years ago no accelerators or international funding existed. There was no appetite for investing in a startup building something innovative. And Masood explained how, on many occasions, investors were confused by their vision and told them to instead bring proven business models to the Middle East. When investors were interested, the terms were terrible.

One of those competitions was the Re@Connect Challenge in 2014, sponsored by the U.S. Department of State. The program brought together like-minded entrepreneurs in central Asia, connected them with mentors and facilitated a pitch-off where teams could win small grants. Gradberry won $5K at the finals in Kathmandu, Nepal, which is where I met them for the first time.

Another was the MIT Global Startup Workshop later that year in Morocco, which they won. “If we could compete with startups coming out of MIT, we figured we were onto something,” Masood says. 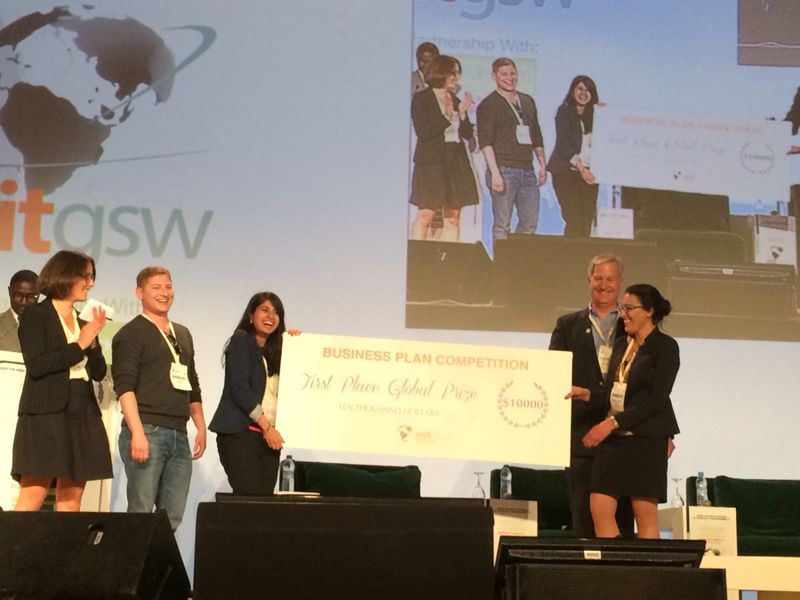 With the $10K prize money came acceptance into MassChallenge, a Boston-based accelerator program. MassChallenge is a four-month-long program but without funding. With little money in the bank, Masood was extremely scrappy to make sure she could stay through the entire program. Combine that frugality with a dedication to work and Masood ended up living in a room with no mattress for several months. She could often be seen catching a few hours of sleep on couches in the MassChallenge office, where heat was free. When she finally got a mattress and then eventually blankets, “it was the best day.”

Living situation aside, Gradberry evolved over the course of the program. MassChallenge was able to introduce them to mentors and employers who got their vision and pushed them to think about scalability.

For example, originally the team was producing their own educational courses. Recognizing that there was both ample content available and that producing content was a very different business, Gradberry pivoted to hosting content and focusing on vetting the candidates. During this transition, the business continued to grow 10 percent month-over-month.

While helping peers in MassChallenge with its Y Combinator applications, Masood said she was inspired to apply to the program, as well. After being turned down twice, the Gradberry team was finally granted an interview and in December joined the most recent batch of YC. “It was a decade-long dream in the making,” says Masood.

Today, Gradberry has evolved yet again. Now focused exclusively on technical talent, Gradberry prompts users to create a “talent profile”, which pulls in their GitHub, LinkedIn and other online portfolios. From there, specific skills are verified by members of Gradberry, all of whom have technical chops, which, as Masood says, is “a differentiating factor from most recruiting firms.”

Though admittedly still experimenting with the process, employers usually see a minimum of 10 curated candidates every week. On average, eight of the 10 candidates directly recommended through Gradberry are interviewed by employers. Similar to other recruiting models, Gradberry takes a commission of $8K on each job placement.

If a candidate is not approved, Gradberry provides individualized feedback on how an individual can strengthen their profile — from contributing more to open source projects to recommending a C++ developer also learn Python and providing the content to do that.

Many startups are already attempting to fill the skills gap and recruit employees, including HackerRank, Hired, AngelList and LearnUp. But Gradberry says it differentiates itself by relying on a combination of automated assessment with human curation and that human layer is what resonates most with potential employers.

The platform also uses education in a very targeted manner, helping candidates to improve on select skills for a specific job they desire. This has led to substantially higher completion rates as compared with most online courses.

Gradberry has registered 106 companies on the platform which is up from 31 since early February; 80 percent of their customers are a result of inbound traffic. Almost all of that growth has come from U.S.-based employers who now represent 95 percent of their job opportunities.

About 55 percent of those sign-ups come from fellow YC companies or alums, a common practice for startups to test out each others’ services.

On the other side of the marketplace, the platform has recruited graduates from over 20 universities, though Gradberry declined to provide exact numbers on users or placements. They are screening 10-30 candidates per day.

Gradberry has its sights on expanding beyond technical screening to historically more qualitative fields, namely sales and business development. By having existing high performers in those roles take the challenges, Gradberry hopes to back out an “ideal candidate profile.”

From this, Gradberry also sees itself in a unique position to find the best candidates, as well as track trends in skill demand on the employer side. Further automation of the process of screening candidates is also in the pipeline.

We’ll have to wait and see if Gradberry’s approach helps it break free of the pack to become a dominant player in the recruiting space. For now, Masood said they’re focused on “making things happen.”