Ryan Hoover is becoming the iconic modern founder. Big on transparency. Quick to admit mistakes. And always trying to galvanize the Product Hunt community. So rather than wait for its upcoming launch, today Hoover previewed Product Hunt‘s next iOS build by livestreaming its developer’s work in progress via Meerkat. 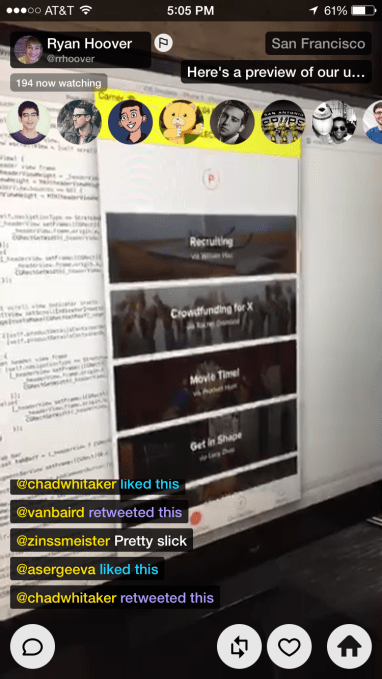 Ryan Hoover previews Product Hunt Collections for mobile over a Meerkat livestream (excuse the image quality, it’s due to the stream)

Search is also getting beefed up, with a three-tabbed interface for searching products, people, or Collections. Hoover said the app will be released “Soon” but wouldn’t provide a date.

While those features might seem like sensible additions that bring the app to parity with its sister on the web, what’s more fascinating is how it was teased. Rather than give a few hardcore users a demo build they’d have to download, or putting up a static blog post, Hoover used Meerkat to create a live conversation about the product.

This wasn’t a one-way broadcast. Hoover frequently stopped to ask for feedback, read the overlaid comments that flooded onto the Meerkat stream, and noted he’d try to work in some of the audience’s suggestions.

You could say this preview might reduce the newsiness of the launch, or expose the small startup’s rough edges, but that’s kind of the point. Product Hunt is embodying its own ideal of crowdsourced critiques. It doesn’t move at the speed of press releases scheduled for 6am eastern time. It moves at the speed of Internet, communicating and iterating in real-time.

And when community members are part of the process, they feel a lot more invested in using the final product…hunt.