Primacy is the most important decision facing news editors on a daily basis. What stories do they want to bring attention to? Newspapers can showcase their best content by placing it on the front page, above the fold. Television news programs can place it on the chyron at the bottom of the screen, boldly demanding the attention of viewers. And websites showcase their important stories with featured article boxes, much like TechCrunch.

Media critics have argued that the internet has disrupted editors, demolishing the gatekeepers that used to hinder certain stories from being published. But far less criticism has been directly at where the real power lies: the ability to pick from the pool of content and give primacy to some stories over others.

But the internet is crushing that power as well. Social media sites now drive an enormous portion of the traffic to the world’s leading news sites, greatly decreasing the power of editors to steer their readers to their best stories. The front page for most readers on the internet is a social network, not a news site. That means that all of us are now the editors, and it is our collective voice that gives stories prominence.

BriefMe, which launched on the app store today, intends to take full advantage of this trend by providing its readers with the top trending news across social media. The team, led by Max Campion with co-founders Hari Ganesan and Rachel Moranis, are a trio of Harvard and Yale grads who believe the world is ready for just one more news app.

Like every startup targeting news, they have developed an algorithm that collects millions of data points about what is trending and what is not, and they use that data to build a list of top ten stories in each of several different news categories.

Their approach is sort of an anti-Prismatic. Prismatic, which may be in discussions to get acquired by Microsoft, was all about using algorithms to find exactly the stories that mattered to you. The company took full advantage of the long tail of content and better machine learning algorithms to build a custom news stream that was dominated by your own tastes.

The challenge is that the vast majority of people still want to read what others are reading. Sure, we all have our own peculiar intellectual niches that we read far more heavily than the average internet reader. But, we also want to have a conversation at lunch and over coffee, and that means knowing exactly what the top stories are that are going to be safe to discuss. BriefMe displays its precise rank for every story in the app, so readers can quickly see just how widely distributed a given story is. 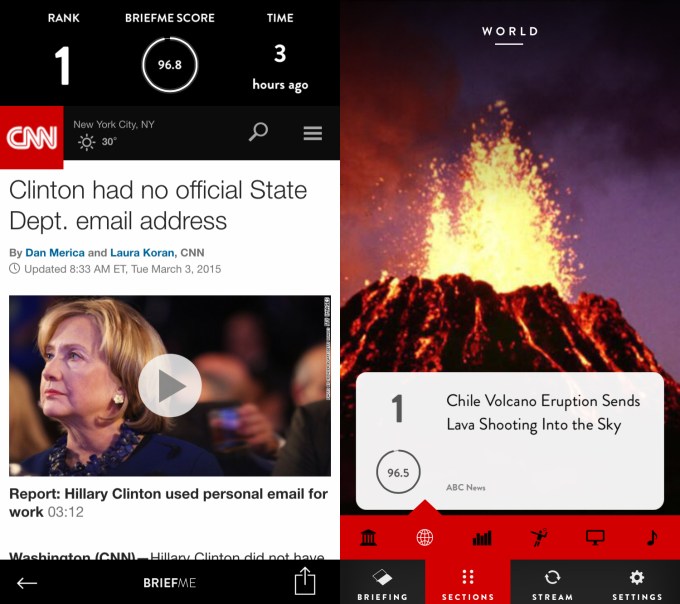 BriefMe also addresses another problem in the news cycle, what might be called the “stability problem.” Social media is a very fickle beast, driving traffic to a news story for an hour or two and then completely moving on, never to look back. Unless people are actively engaging with a story, it tends to fall away as other stories take on primacy.

Social networks are keenly attuned to this challenge. Facebook has made longer-lasting news stories in its news feed a key element of its product design, and the site even resurfaces older links when they have new comments and likes. Twitter is now experimenting with showing you tweets that you might have missed, giving news stories another chance to catch an audience.

BriefMe has managed to use social signals to curate the news, but not at the expense of stability. In using the app, stories do change throughout the day, but not at the frenetic pace of Twitter. This is important in the product philosophy here: if you want to know what everyone is talking about, you can’t be expected to open the app every ten minutes just to make sure you don’t miss something.

While it has a unique approach, BriefMe’s greatest challenge is the same one that faces every writer and every editor: how do you get an audience in the first place? The news app market is littered with different takes on the news, and even the most technically-sophisticated and well-crafted apps can fail to catch fire.

BriefMe has a capable UX design and a clean user interface, and in testing the app, it properly downloaded stories from a litany of websites without too many glitches. That frankly puts its above many of the news aggregator apps on the App Store, which tends to be something of a cesspool.

But getting the basics right is just table stakes these days, even more so now that Facebook is building tools for publishers to host their content directly in the news feed itself. Unlike other bets here like Longform, a recently launched app that showcases content that is – you guessed it – longform, and Timeline, which also recently launched to show you the long history of a news story, BriefMe is the closest to directly competing with the social monster.

And that is the irony of the media in our social age. We have democratized primacy by allowing all of us to choose the most important stories, but that primacy is ultimately owned by a handful of networks with very few restrictions. Even BriefMe takes advantage of the signals those networks throw out. We need an app like BriefMe like never before, but it has never been harder for a news app to find success.