Sony isn’t done with mobile hardware yet, despite its recent talk of an exit strategy from smartphones. Here at the Mobile World Congress tradeshow in Barcelona it’s showing off a new 10.1 inch Android tablet, the Xperia Z4, coming this June, along with a new mid-tier 4G/LTE smartphone, the Xperia M4 Aqua  — its first octa-core 64-bit smartphone.

The Xperia M4 pushes some of Sony’s premium smartphone features, such as waterproofing, its sleek surfaced ‘Omnibalance’ design language, and higher end camera hardware (13MP camera, f2.0 aperture), down to a mid-range price-point (€299/$330). Under the hood it’s a Qualcomm Snapdragon 615 processor. 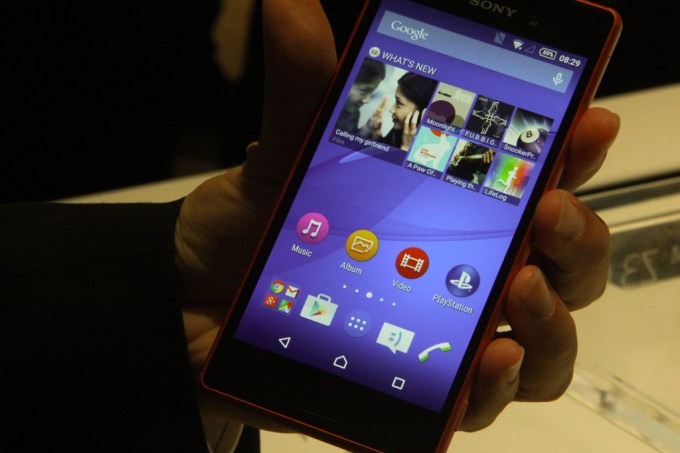 Sony says the phone will launch in 80 countries, starting this Spring.

Meanwhile the Xperia Z4 tablet, which has a Snapdragon 810 octa-core 64-bit chip, harks back to Sony’s PC making days — thanks to an add-on keyboard accessory. A Sony rep told TechCrunch that former Vaio staff worked on the optional Bluetooth keyboard accessory for the tablet, called the SCR32 perfect fit cover.

The keyboard includes dedicated physical keys for the Android tablet’s on-screen navigation touch-keys, along with a built-in touchpad, so there’s no need to touch the screen when using the device in this quasi-laptop mode. With the keyboard attached, the Z4 could pass for a plastic-y Sony Vaio.

Sony is touting the thinness and lightness of the Z4, which is just 6.1mm thick and between 389g and 393g (Wi-Fi only and LTE versions, respectively). Construction is a mix of plastic, stainless steel reinforcing at the corners and mineral glass.

Also on board: waterproofing and dust-resistance (to IP68). It’s not the first time Sony has added waterproofing to a tablet. Last year’s Z2 was also proofed against dropping in the bath, mid-movie.