Word has it that last month’s launch of Snapchat’s “Discover” feature, which connects the messaging app’s users to news stories and other media packaged in a way that’s ideal for consumption in quick bursts, has been driving millions of pageviews per day for its publishing partners. But the evidence pointing to Discover’s popularity has been fairly anecdotal until now. According to new data coming out this morning, however, the average data consumption per active user on Snapchat skyrocketed following Discover’s launch in both the U.S. and Europe.

The average weekly data consumption figures, which are being shared today by mobile analytics firm 7Park Data, were sourced from millions of Snapchat users on Android in the U.S. from December 2014 through February 2015, the company reports. 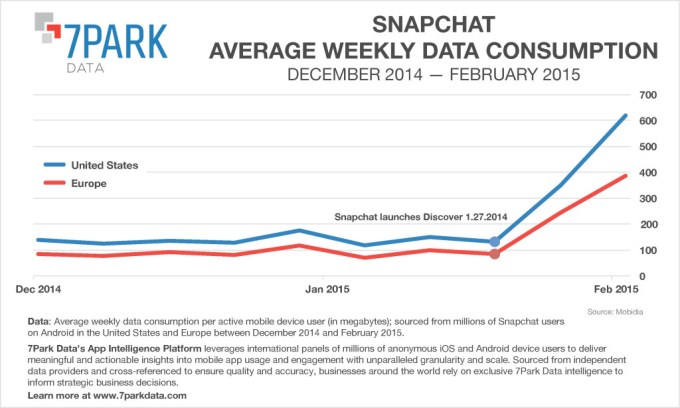 According to the firm’s findings, mobile users – and especially younger users – are flocking to the feature as a way to consume short bursts of native video content, and more.

Snapchat’s ability to engage this demographic is notable, too, as many mobile apps today still struggle to attract and engage younger users on this scale, 7Park says.

In diving into other data the firm was willing to share about Snapchat’s growth over the past few years, we also found that Snapchat returned to growth in Q4 2014, setting all-time highs in both active users and total sessions. Active users rose 5.1% on Android and 13.8% on iOS during this time, while total sessions grew at a 17.5% clip. 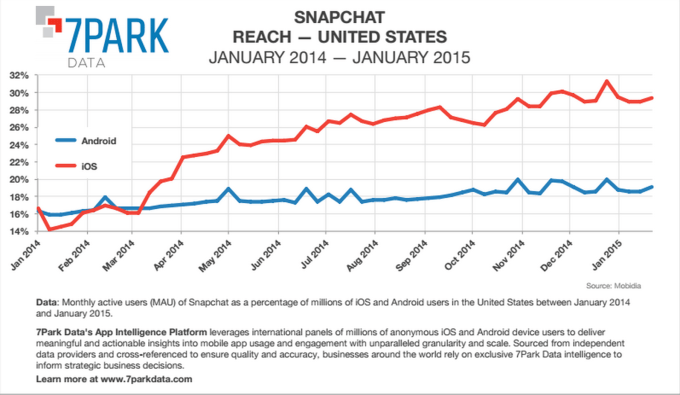 The service has shown strong, consistent growth over the past two years on both iOS and Android, in terms of both active user growth and engagement. However, over the past year, the growth rates decelerated compared with 2013, which is attributable more to the maturation of the Snapchat platform than anything else.

Another thing that’s worth pointing out today is that time spent in minutes is now continuing to outperform user growth. This isn’t a bad thing, though – in fact, it’s what we’ve seen in the past for Facebook as the platform continued to mature. Snapchat is past its hyper-growth phase when it comes to acquiring new users, which you can see in the data set below.

Even though Snapchat’s 2014 growth doesn’t equal that it achieved in 2013, it’s clear that Snapchat is still attracting new users. And for those users it already has, it’s finding new ways to keep them engaged and spending more time in its application doing things besides just messaging their friends.