We first reported on Metaio’s Thermal Touch concept for Augmented Reality interaction last spring. Still in its infancy, the concept relies on thermal imaging cameras to track residual heat your body leaves on surfaces that it touches.

Metaio’s software can track these heat signatures so they act as “clicks” or “touches” in Augmented Reality interfaces that only the user sees on interactive eyewear or devices. It’s a pretty interesting concept and will undoubtedly open a new realm for User Experience and User Interface experts to ponder. 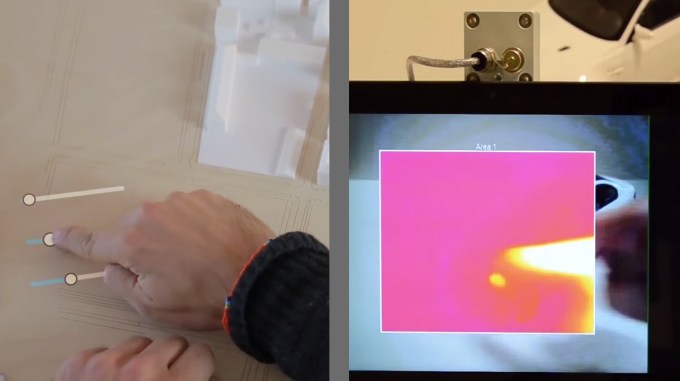 The first prototype we looked at was crude and completely impractical—an iPad with a giant thermal camera attached to it. Indeed, a few people pointed out to me “why would you need to touch external surfaces, when the iPad screen is right in front of you?” However that question totally misses the point of the prototype, which was really just proving the concept was worth further exploration.

This next concept for thermal touch that Metaio is demoing at the Mobile World Congress this week is almost as crude as the former, but does break some new ground in that it is built to better emulate how the team envisions the tool working when it is finally productized: as a wearable system.

Using the FLIR One thermal imaging iPhone case as part of their prototype, the team has been able to test how their software could enable new interface paradigms for interactive eyewear. This next prototype—huge as it may be—is at least built into a wearable format. In this way, you can begin to see how this concept could work once interactive eyewear, as a category, reaches a non-embarrassing-to-wear form factor (um, we’re not there yet).

Again, these are future concepts but I appreciate this approach because this feels like true R&D and Metaio have approached this in the classic way by employing small, nimble teams of researchers to conduct these types of experiments and think about the future. I think this is how you get new stuff created!

I’m anxious to see where this interface capability goes and how this could integrate with all the developments in interactive eyewear that are coming from the likes of Microsoft, Magic Leap and Meta.