When Apple and IBM announced a partnership last year, more than a few jaws dropped, but the two have been working together to create a new wave of enterprise-friendly apps — and announced the latest round to come out of the affiliation today at Mobile World Congress.

At first glance, the meeting of these two companies may seem a case of technology making strange bedfellows, but they joined forces with the idea of combining Apple design sense  with IBM enterprise know-how.

Steve Jobs after all was known to sneer at the enterprise. His heart was squarely with the consumer, but in the post-Jobs Apple, there appears to be a greater desire to meet the needs of business and to bring that same consumer simplicity ethos Apple is famous for to work.

Katharyn White, IBM’s global lead for the IBM-Apple partnership, who seemed genuinely pumped to be involved in the project, says the two companies want to bring the wow factor to workplace software. This is actually something we have been hearing from companies since at least 2009 when the iPad really altered the perception of how software should work.

“The goal of the partnership is bring to our work lives, the same experience we have in our personal lives,” she said.

The idea is that people use these great tools in their personal lives, then they go to work and use clunky business software designed more for IT, than the needs of people trying to do a job. This is essentially the root of the “Consumerization of IT,” that idea of bringing consumer-style software to the workplace we have been hearing about for several years now. Apple and IBM certainly aren’t the first to try this, but with these two high-profile companies involved, it’s bound to get attention.

White says the companies have four main goals in mind when they create an app. First of all they want to address a real pain point and find a way to fix it with a new mobile workflow. Next, they want to take advantage of analytics, so that the app gets smarter the more people use it and each update builds on the data they’ve gathered. Thirdly, they want to exploit the fact that it’s a mobile device and it has tools like GPS, camera, accelerometer and so forth. Finally, they want to make the app fundamentally change the way an employee works.

The partnership launched last year with 10 apps, and today they are adding three new entries including apps for airline customer service, retail buyers and wealth managers. They have released 14 in total to-date, with an ambitious target to release 100 apps by the end of this year. 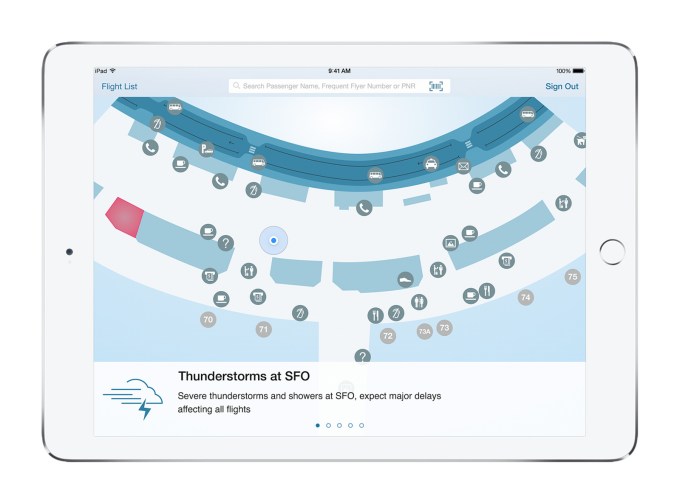 My favorite is the airline Passenger Care customer service tool because it’s designed to improve the customer experience and let airline employees proactively deal with delays, processing people who volunteer to get bumped and so forth. Most airlines are living in the 20th century. If you’ve ever experienced a flight being canceled, it’s madness as they force you to queue up and reschedule an entire plane full of people. White said to imagine instead, employees with iPads moving through the lounge and dealing with people individually to rebook them, send them to a lounge or to get a meal. If it works as planned, it has the potential to turn a stressful situation into a much more comfortable (or at least reasonable) one. 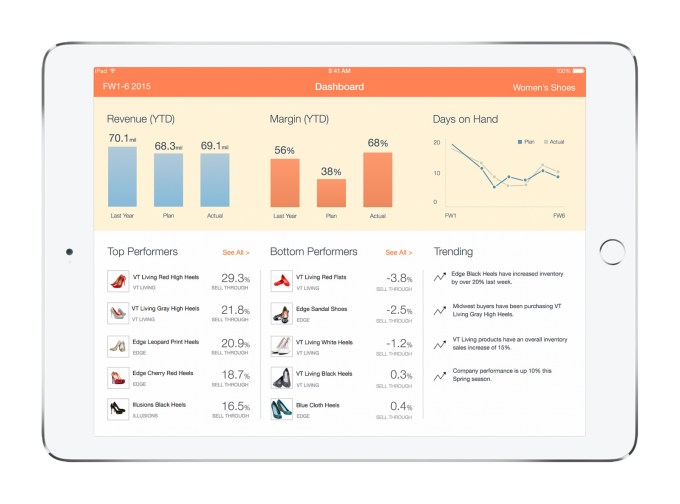 The Dynamic Buy-buyer app is designed to help retail buyers get the best deals on high margin, high revenue “spot buys.” These are buys that are done outside of the regular buying cycle. If the buyer can see inventory requirements in real time and comes across a good deal on a popular item, the app lets them strike early, armed with the information they need without having to communicate to the back office about inventory requirements at any given moment. It also lets other buyers know they have a good deal in place, so they don’t double book or compete against each other. 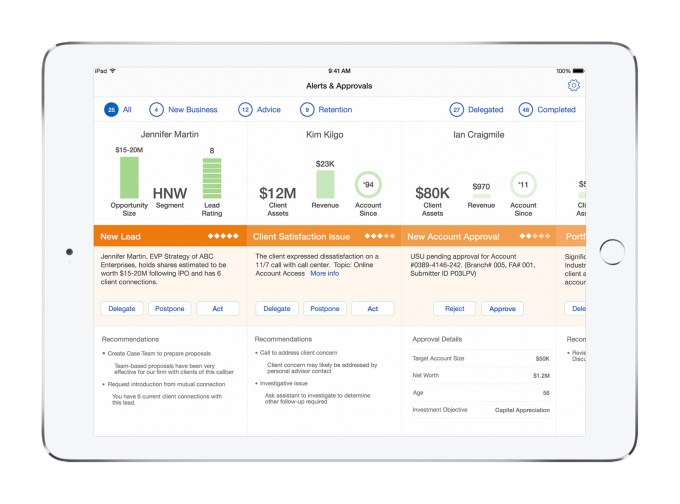 The wealth management app called Advisor Alert is designed to help financial services pros service their clients better. Based on what it’s learned about what the most successful advisors do, the app offers advice on the best actions to take on behalf of a given client. Surprisingly, it doesn’t take advantage of another IBM tool, Watson Analytics, but it still uses analytical data to offer the best course for a given client — and customers could tie it to a Watson project if they wish.

While these apps are all designed to simplify the life of the employee, they still have to connect in real time to existing systems of record, typically on-premises in a company data center and this could be one reason that IBM is so gung-ho about this deal.

Not only does it give them a chance to take advantage of Apple’s design smarts, it requires a great deal of back-end manipulation, the kind that requires a large (and likely expensive) service component to help the customer connect to these systems. Meanwhile, Apple puts iOS devices in the hands of big-company employees and gives them tools that it probably couldn’t create on its own because of its lack of business acumen.

If the deal works out as planned, it could be lucrative for both companies. Of course, it requires them to deliver apps that truly make a difference in how workers do their jobs, and the success of the project will pivot on their ability to consistently do that across industries.