Editor’s Note: Jeni Mayorskaya is an entrepreneur working in product management and business development with tech companies in the USA, Singapore, Philippines, Thailand, Russia and Europe; Kirill Belov is an angel investor, mentor and managing partner in Impulse VC based in Moscow.

Over the last 6 months, Russia’s image as a lucrative investment target has been wrecked along with all of its economic markers.

If you, like a lot of international companies, had been planning to expand in Russia and hunt for Russian users to build proper business relationships here yesterday, as of today you’d barely think twice about removing all the news of war and the collapse of the ruble from your feed. Perhaps you’re rethinking your go-to-market strategy, leaning towards China or Europe instead (if you’re from the USA and can even conduct business with your prospects).

Well, we believe  that this is, in fact, the best time to enter the Russian market.

Every crisis turns into economic growth eventually. Leveraging the current economic downturn to finish with the highest user base, or simply following the “buy low” rule, could lead you taking it all at the end.

For one thing, investments in online marketing are in local currency and you’re paying only half of the previous prices because of the exchange rate slide alone.

Another piece of good news is that most Russian companies will decrease advertising spending to save in this tough period and you can get the best inventory on the market with almost no competition.

The Russian population is still about 150 million, with internet penetration of 57% on average (growing rapidly in the regions away from the dominant urban centers). We believe mobile internet domination will come in the next two years, so you have a chance to get nearly 120 million connected users on the new economic wave.

The lack of revenue and investment means local development is contracting. According to our analysis, purchasing capacity will drop 75% in the coming months, which will cause a wave of bankruptcy and M&A deals as companies struggle to survive (e-commerce has taken its first punch already, a teasing one for now, but the serious blow is coming).

These factors will bring about the ideal circumstances for a foreigner to enter the market with new business models and products which could flourish in the current economic situation (sharing economy, savings, security etc.).

The online market in Russia is still young and unsaturated. Global products gain more and more local users if they’re localized properly. And globalization itself still has an impact. This can’t be turned around in one moment.

If you bring a better product to the target audience the demand will come. For example, we use Slack, GitHub, Dropbox, LinkedIn and Duolingo not because we don’t have local analogs – we actually do – but because foreign products are crafted so well that it’s financially and emotionally costly to switch to anything else.

To give you some context, lets recall the super-ambitious initiative of the government-held Rostelecom to launch a patriotic search engine, Sputnik, almost a year ago — with annual costs of nearly $20 million by some estimates. After months of effort from the team (read: money and propaganda), Sputnik accounts for about 850 thousand total visits per month, compared to 1.5 billion for Yandex (which holds 62% of the market) and 644 million for Google.

Lay-offs of up to 30% are expected, and so international companies can have the huge advantage of being boss to the best minds in the market.

You also can think about hiring developers in Russia as well. It might sound crazybut since a lot of ambitious start-ups will fold in the coming months with no sources of revenue or investment, the brightest minds will be available and you can get the best engineers for the price of $18-25 thousand per-year.

Lyft, for instance, is already out headhunting, proposing stock options, relocation and other perks.

China is a big brother to Russia not because of the Communist unity of the past, but simply because it’s close enough and Russia’s geography is immense. Even in Russia, half of the country doesn’t really know that if you go to its Eastern provinces you can barely see any Russian products — everything is imported from China and these territories are in fact more Chinese than Russian as the Slavic population thins out. This, and the similar mentality of both nations, have resulted in Chinese apps and handsets flooding the market across Russia.

China’s presence continues to grow dramatically. Huawei now competes with Cisco to control state purchases. Dolphin Browser (a Chinese mobile browser backed by Sequoia Capital) for Android grew fast, reaching 12 million users within a couple of years and with no marketing efforts. Dolphin’s management has the right idea, increasing its local presence and scaling its success in user acquisition and monetization of 150 million users in Russia now.

Even in Russia, half of the country doesn’t really know that if you go to its Eastern provinces you can barely see any Russian products.

Moreover, AliExpress is opening its first pick-up point in Russia. And its pricing is winning the hearts of Russia’s regional populations through pricing.

China’s trendy Xiaomi hasn’t blinked either, declaring its intention to enter the market this year. Xiaomi could become a market leader pretty easily since last year the sector overachiever, British low-cost brand Fly (Meridian Telecom Group), overtook Nokia and Apple in Q1 and then almost got Samsung in Q4. 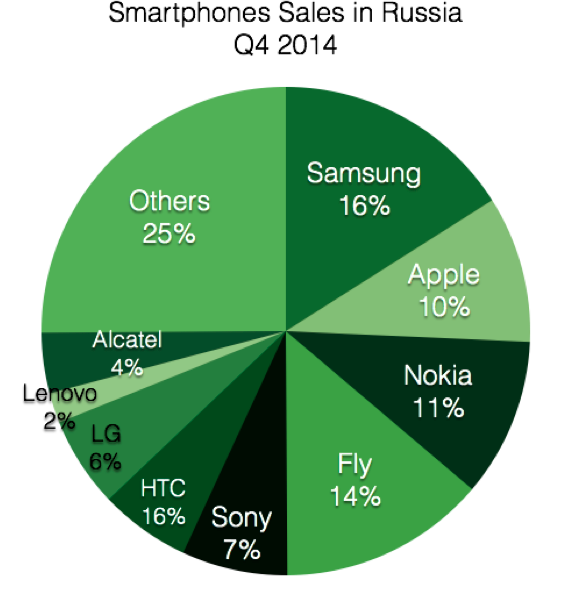 A lot of low-cost smartphones and feature phones are illegally imported from Asia (we call it the “gray” market), but you can leverage this disruption by dealing with the exporters on pre-installs of your app.

The Competition May Be Coming?

Yes, it’s crazy here and you might be banned from the country, but usually what you hear is just media overreaction. For now, there are no major precedents for tech businesses being kicked out for political reasons.

The level of risk of expulsion you face depends on the type of the business you run, though, and we’d recommend you do some market research in advance and apply some common sense too. For instance, you might agree that it does not sound like a brilliant idea to launch a new political media outlet for Russians.

However, a team of ex-Lenta (a leading online media operation shut down over a content policy issue) employees entered the market three months ago with a brand new outlet, Meduza, focusing on social-political news and Russian reportage (they have an English version too). Today they reach 1.3mln readers monthly and this is by far the fastest growth in the industry in Russia so far.

Lower Regulatory Barriers To Entry Than Other Emerging Markets

You don’t have to receive certification for your software in Russia, as you do in China or some other emerging markets.

In Russia, enter the market with an offering, which is comparable to local pricing or even cheaper (if not for free). The goal must not be to monetize the audience straight away but to gain market share and become a strong influencer, ready to be the first to start monetizing the wave of recovery.

Having this country in your pocket will definitely add to your company’s valuation.

Then, think of the industry you’re playing in carefully. Some of them have quite high barriers and demand a lot of long-term investments. “Long-term” is a tricky word in Russia; we don’t have such a thing really. Just keep this in mind.

If you’re Palantir, (or not, but your revenue also comes from state purchases) be ready to find a strong local partner with strong GR skills (read: a lot of banya and vodka-based activities).

And you can buy intellectual rights, patents and teams for small sums ($100,00 to $3 milion) in Russia. It’s not always an acqui-hire from the local point of view, and both sides of the deal will be happy.