When launching a new consumer application, especially those in the social space, many developers today rely on an invite mechanism that has the app’s initial user base reaching out and recommending the app to their friends. But today, these invite systems are often fairly basic – they connect to a phone’s address book and then force the user to sift through their hundreds of contacts for those they think would be interested in joining the new app, too.

A Y Combinator-backed startup called YesGraph wants to make these invite and referral systems more intelligent, with a tool for developers that puts the best contacts – meaning those who are most likely to accept an invite – at the top of the list provided to users.

The company has also now raised a $1 million seed round led by Bloomberg Beta to fund the service’s further development.

YesGraph was initially founded in summer 2012 by Ivan Kirigin, previously head of growth at Dropbox. But earlier, the company was focused on using its core engine to develop a better recruiting system which would help companies find top talent to join their team by highlighting people who current employees already knew.

In the months since that product’s debut, however, YesGraph encountered some challenges. For instance, LinkedIn made changes to its API which limited full access only to approved partners, which put a damper on the growing ecosystem of startups that leveraged the technology for other purposes, as YesGraph did. In addition, explains Kirigin, the earlier service was something that appealed a lot to fiercely competitive tech companies, but wasn’t resonating outside the industry as much.

But really, he adds, the idea to put the core engine into use in a new way was simply more compelling. Plus, after talking to a number of companies in the space, he found there was a lot of demand.

“Before we wrote a line of code dedicated to spinning out this core engine, we already had some pilot customers lined up to use it,” notes Kirigin.

The way the system works is somewhat complex, but at a high level, it combines a data from a number of sources, including external services like FullContact, as well as information users have already shared with the app. It also takes into account the app’s targeted customer base and the app’s purpose to make its recommendations. 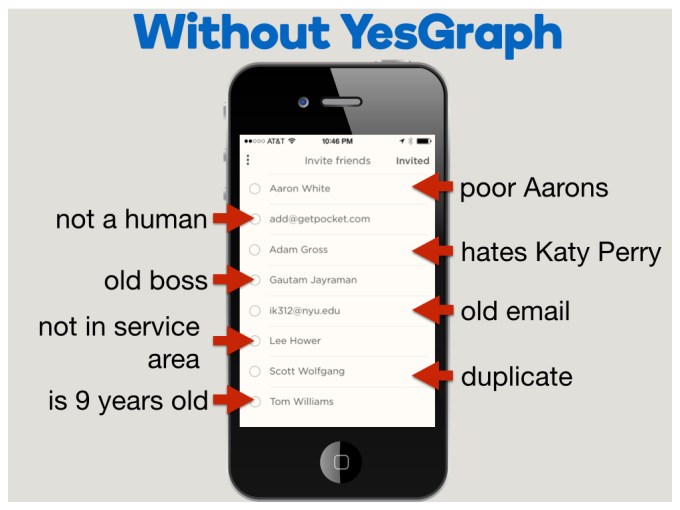 For example, if it’s a social app for families, then it may want to track down those whose email addresses have the user’s same last name. Or if it’s a collaborative app for business users, it may want to locate colleagues who share the same email domain.

The requirements for each company’s invite system will vary, of course, but the overall goal is to automate the ranking of a user’s contacts when they invite friends to join an app. So instead of just being presented with a list where all the “Aarons” are at the top of the recommended contacts, the most relevant contacts are presented first.

To make this work, YesGraph has to understand both a user’s relationship with the contact in question, and it has to understand how good of a match that contact is for the app itself – something which in other industries is referred to as “lead scoring.” 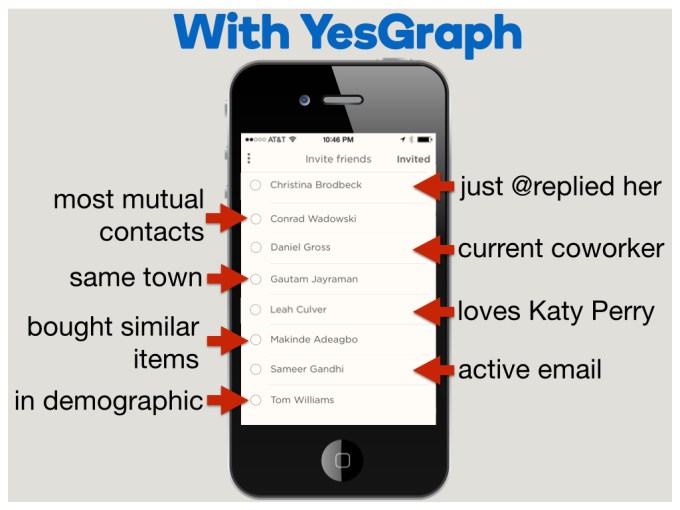 Larger social networking companies already have big teams dedicated to developing sophisticated growth and referral systems like this, but the goal with YesGraph is to expand access to a broader range of companies, from smaller startups up to enterprise level clients.

The system will be made available via a developer API – and because it’s still in private beta, pricing is not yet available. But Kirigin says that, eventually, the company will be able to attribute an app’s growth to its recommendations and will charge accordingly.

Some of YesGraph’s earliest testers include YesGraph’s Y Combinator colleagues, and it’s working with these customers to figure out where it makes sense to take the service next – whether that’s developing SDKs for iOS or Android, or figuring out what sort of functionality should be included in YesGraph’s online dashboard.

The dashboard, which is also still under development, will display the product’s performance. Kirigin says that he’s thinking that this dashboard should be more about offering analysis, instead of something YesGraph customers have to configure for themselves to make the service work better.

“I personally think the responsibility’s on us – building a complex dashboard to tune and target things is like having enough rope to hang yourself…I’d like to set the bar higher,” he says. “We should figure out what sort of knobs to turn to make it optimized.”