If you’ve been wondering how Switzerland was going to react to the coming of the Apple Watch, ponder no more: two smaller luxury watch companies, Alpina and Frederique Constant, have added electronic components to otherwise staid analog watches, essentially turning a fancy timepiece into a sort of mechanical Fitbit.

The platform, called Manufacture Modules Technologies or MMT, is embedded inside Swiss-made cases and powers the hour and minute hands as well as, in the current version, a subdial that tracks your activity. The crown on the side of the watch is actually a pusher and everything is set from your smartphone rather than by turning the crown. The internal battery lasts two years and syncs via Bluetooth. The modules are made by MotionX, the same company behind the motion trackers in Jawbone’s products.

A separate app shows your health data as you saunter from meeting to meeting or nibble a madeleine.

The central face tells the accurate, quartz time while the subface can display various pieces of data. In its current incarnation the system is basically an activity tracker similar to the Withings Activité. The functionality has been simplified so that companies are able to hide the complexity behind a traditional dial, a feature that should please Luddite watch lovers. 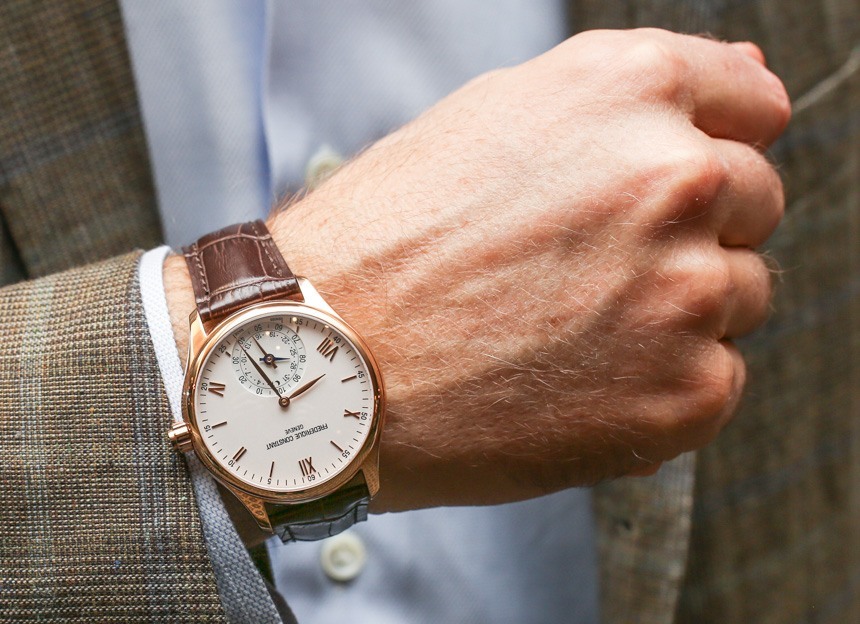 But what about the rest of us? This solution is a far cry from the recharge-once-a-day smartphone expanders available for Android and iOS and the decision to avoid a on-wrist screen altogether is a bold one. As Ariel Adams at ABlogToWatch notes, “The question MMT is trying to answer is how the traditional watch industry will react to timepieces no longer being about only tradition, luxury, and style, but also (once again), functionality.” This attempts to meld style with function and I’m not quite sure it succeeds.

This will be a period of experimentation (and failure) for the Swiss watch industry. Alpina and Frederique-Constant are both owned by innovator Peter Stas and they are decidedly lower on the haute horology food chain than, say, a Patek Philippe or Rolex, allowing them a bit of room to try new things. However, these more expensive watches – expect them to cost in the $2,000 range or more – are a hard sell in the face of $200 activity wearables that the chic and traditional can hide under one French cuff while they burnish a mechanical watch with the other.

Furthermore, companies like Kairos and Montblanc are adding smart features to your band, allowing you to have your almond financier and eat it too.

This space is exploding and the fact that a traditionally mechanical watchmaker is embracing the equivalent of a microchip attached to a big battery is telling. While MMT is decidedly not for everyone, I wouldn’t discount interest just yet. There is still a subset of watch buyer out there that looks in disgust at the Apple Watch and is still wary of wearables. The overlap of that Venn diagram is still bracingly small but, to paraphrase P.T. Barnum, there’s a watch lover born every minute.