Google announced this morning the launch of a pilot program which will allow mobile application developers the ability to advertise their apps directly within the Google Play store. These ads, which will initially be made available to advertisers already running search ads on Google.com, will also only be shown against Google Play search results. That is, they won’t just randomly appear in other sections of Google Play, like category pages or stuffed in the middle of Google Play’s Top Charts.

Instead, advertisers will be able to bid on ads that match a particular search query, like “hotel apps” or “coupon app,” for example.

Their mobile application would then appear at the top of the ranked search results returned from Google Play’s store, where it looks exactly the same as any other result except for the fact that it will be flagged as an ad via the small “Ad” button that appears under the app’s name.

As the company explains in a blog post this morning, its 100 billion-plus Google.com searches each month have improved content discovery for users and advertisers alike and now the search ads on Google Play will do the same for app publishers.

Specifically, the program will better allow newcomers and smaller developers the chance to compete and gain visibility in an app store that Google says now tops over a million applications.

Search Advertisers Are First To Test

There are few details being offered as to the program specifics at this time, because it’s only now entering pilot testing. For the time being, the ads will run just in the latest version of the Play Store mobile app on Android smartphones, not on tablets, or on the mobile or desktop web. And only a small number of consumers will actually see the new ads at first.

We understand that potential advertisers were identified automatically and invited to participate in the program via email, and those who chose to do so aren’t actually paying for their ads at this time. Rather, the pilot period is meant to allow the app publishers and users alike a time to test and provide feedback on a number of things, including the mix of ads, how keywords are targeted, how many ads are shown in the search results, and to what extent these Google Play ad campaigns will influence the Top Charts’ algorithms in the future, among other things.

That latter item will require careful attention, as an app maker buying app store ads could very easily boost their downloads at a rate that would otherwise push their app to the top of the  store’s charts. But that wouldn’t necessarily mean their app had grown popular with users, but rather that they had paid for the exposure and clicks. It will also be interesting to see how Google addresses click fraud in the new store, as competitors may try to eat through each other’s ad budgets.

We also understand that there’s no way for advertisers or users to opt into these trials at present. Google isn’t saying how long the program will be in pilot testing, nor will it give a broader time-table for a public beta or public launch. It also won’t confirm how many advertisers are in the initial pilot.

In addition, beyond being the means of selecting advertisers for the trials, there’s no connection between search ads on Google.com and those on Google Play at this time. It’s unclear if in the future, however, current search advertisers will be given preference to join the Google Play advertising program when it opens up to more participants.

It’s not surprising that Google is introducing mobile app ads into its app store ahead of rival Apple, given the nature of its core business. It’s actually a logical next step for the company in a world that’s increasingly mobile. After all, the move to mobile is becoming a threat to Google’s advertising business. According to data from Flurry, only 14% of the time users spent on their smartphones was in the web browser in 2014, down from 20% the year prior. And the web is where Google’s ads have traditionally appeared.

A number of tech companies like Facebook, Twitter and Yahoo, as well as Google, have been targeting their mobile user base with ads that prompt users to download apps or re-engage with apps they already have installed. But Google will now be the first major OS maker that actually allows app publishers to advertise directly in its app store search results. 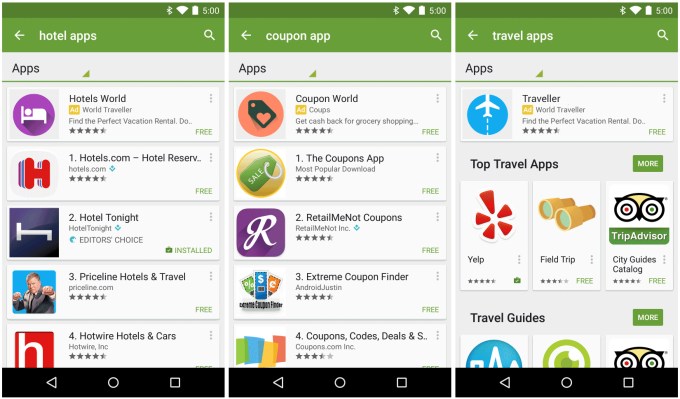 That being said, it’s worth noting that Apple, too, has experimented to some extent in this area. It has tested “ads” – if you can call them that – that appear against select search terms in its iOS App Store. These ads in the past have promoted Apple’s own products or features. For example, a search for “music” once showed a search result card for iTunes Radio before other results, and today a search for “maps” on the App Store points to Apple’s editorial collection of map apps. While not the same kind of “ads” that Google is rolling out, it’s clear that Apple also understands the value of being in that first position.

The question is now whether or not they’d also be willing to sell access to that spot, like Google is.

Also of interest, Google used today’s announcement of the Google Play ad pilot to offer an update on its payouts to Android app developers. At its I/O conference last year, Google said it has paid out $5 billion to app developers in year prior. Today, it says that number has climbed to $7 billion. While that’s still short of the $10 billion Apple recently announced, it does show that Google is closing the gap quickly when it comes to revenue.