Google’s Android has gobbled up market share world wide, now accounting for over 80% of all smartphone shipped globally. But when it comes to actually making money, Apple is eating all the profits as it continues its focus on premium devices. Today Strategy Analytics said that Apple in Q4 last year accounted for 89% of all smartphone profits, equating to $18.8 billion, with Android taking only 11%, or $2.4 billion.

The blow for Android is softened only slightly less so only by the fact that other platform players like Microsoft, Blackberry and Firefox seemingly made no profit at all. 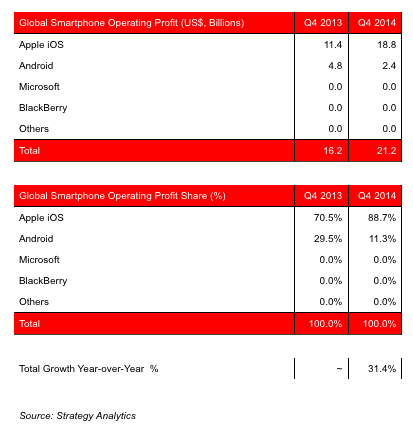 The figures given here relate to profits generated by handset makers, not the services ecosystem and potential profits made by app publishers and others, which, of course, includes Google itself, which adds new users of for its mobile search business, mobile ads business and other apps with each unforked Android sale.

Overall, smartphone handset profits were up 31.4% compared to the same quarter a year ago.

When it comes to who is performing best among Android OEMs, the results speak of the growing competition for Samsung.

“Samsung is the Android giant that delivers most of Android’s smartphone profits worldwide,” he tells me. Mawston says the company is not breaking out exact shares, except to say that “Samsung accounted for well over half of all Android smartphone profits globally in Q4 2014.”

As a point of comparison, in 2013, Samsung accounted for 95% of Android profits. That was a time where there was significantly more parity between Apple and the Korean handset maker both in terms of unit sales and revenues, with Apple accounting for “only” 57% of profit at the time.

It’s not too surprising that Apple — which last quarter had the most profitable company of any quarter, ever — is dominating in smartphone profits, but what is striking is just how wide the gulf has become.

The bigger picture seems to be that Android handset makers are in something of a race to the bottom at this point: the markets that are driving growth in smartphone adoption these days are emerging economies, where consumers are price sensitive. That’s leading to the production of a number of models that are pushing down the average sale price for devices, which long ago dropped below the $100 mark.

Apple may have missed the boat (so far) when it comes critical mass in market share in these developing markets, but it has more than made up for it by making a killing in places where it is strong. China is one such crossover example. While there is clearly a market for lower-cost and Android devices, Apple has been posting record sales in the country, reporting sales of $16 billion in the country in Q4. (China is not — yet — however overtaking Apple’s sales in markets like the U.S.)

“Apple’s strategy of premium products and lean logistics is proving hugely profitable,” Mawston writes in the report. “Android’s weak profitability for its hardware partners will worry Google. If major smartphone manufacturers, like Samsung or Huawei, cannot make decent profits from the Android ecosystem, they may be tempted in the future to look at alternative platforms such as Microsoft, Tizen or Firefox.”