20n, one of a wave of biotech-related startups that Y Combinator is starting to fund, is the brainchild of a UC Berkeley professor and a post-doc.

Saurabh Srivastava and J. Christopher Anderson have worked together for several years developing software that can design genetically engineered microbes to make specific chemicals. While at their DARPA-backed lab at UC Berkeley, they created bacteria that could produce acetaminophen or Tylenol. 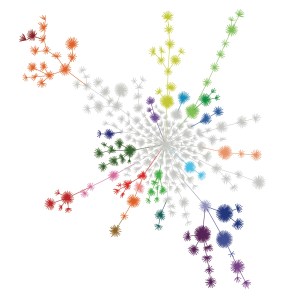 Their special sauce is their software platform. While there are companies that license ways to create bacteria that produce specialty chemicals, the process of identifying how to create these microbes is tedious.

20n says its data-mining technology can get to 100 times more chemicals than were previously thought possible. (A visual map of these possibilities is laid out in the picture at the right.)

Companies will tell 20n what molecules they want to make, and 20n’s software will design a microbe that can do it. They have to be organic compounds, however.

With the specialty chemical industry being worth $980 billion, licenses for these microbes can start in the hundreds of thousands of dollars. 20n already has several contracts in negotiation.

“Even the most boring chemicals still tend to be billion dollar markets,” Srivastava said.

They named the company 20n because 20 is the number of standard amino acids specified by the universal genetic code. Proteins are made of sequences that are typically 300 to 500 amino acids long. 20n is the set of combinations the company gets to play with.

Srivastava earned his Ph.D. in computer science, while Anderson is a tenured UC Berkeley professor who has worked in synthetic biology for 17 years.

In their years of working together, their different backgrounds led to some funny miscommunications. For instance, API means “application program interface” to a programmer and “advanced pharmaceutical intermediate” to a biochemist.

“We had to figure out a language to work in that both a biologist and computer scientist could understand,” Anderson said.