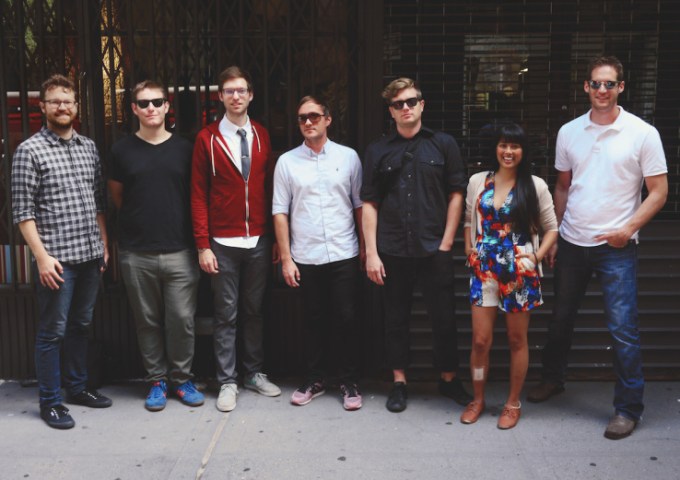 Of the original Ultravisual team, only Jenn de la Vega (2nd from right) is staying with Flipboard.

Just six months after being acqui-hired, the original team behind ‘visual storytelling’ app Ultravisual are leaving Flipboard to venture out on their own once again.

The group’s yet-unnamed startup aims to make messaging — either one-to-one or one-to-many, Twitter-style — more context-aware, so that messages arrive at a time and place that is as relevant to the recipient as it is to the sender.

Equally interesting, is that the team plan to have a focus on the Apple Watch from the get-go.

“We’re creating a new platform for messaging – one focused on context-awareness and relevance – and designing for the Apple Watch from the beginning,” co-founder Alex Herrity tells me. “While we’re all getting more context-aware system messages (i.e. Google Now telling you how much traffic you’ll hit on your way home), that type of relevance isn’t there for user-generated content yet.”

The plan — though Herrity stopped short of showing an early version of the product or even a mockup — is to create a way for users to send a message at “the right place, the right time, or after the right number of steps.”

As to how this might translate in practice, he gives the example of your Significant Other sending you a message that they are having a bad day and would like you to buy a bottle of wine on your way home — a message that would be best delivered right before you set off for your after-work commute or when you are close to a grocery store.

Or, in a one-to-many situation, a band you follow could send you a message about an upcoming gig, only if your current location is relevant.

Along with time and location, other context-aware trigger-points could include data pulled in from third-party apps and sevices, such as via Apple’s HealthKit. For example, your personal trainer might decide to only send you a message after you’ve completed a workout.

Furthermore, Herrity says the need to give messages “context-awarenes” is only going to become greater with the advent of devices like Apple’s soon-to-launch smart watch.

“With wearables like the Apple Watch demanding your attention, it’s going to be more and more important that messages and content arrive at only the most relevant time,” he adds.

It’s this “exciting opportunity” that led Herrity and five of his previous team members (ex-Ultravisual Community Manager Jenn de la Vega is staying with Flipboard) to leave after only 6 months to do another startup, the timing of which I understand had nothing to do with any buy-out clause. Flipboard’s acqui-hire of the Ultravisual team was an all-stock deal after all, and six months in falls well short of the typical vesting of shares over a 1-4 year period.