If you’re an online publisher, you’ve got plenty of analytics tools to choose from, but they’re mostly focused on telling you which pages and articles are popular. That’s why Reverb is launching a new product designed to give publishers a deeper understanding of their content and why people are reading it.

Reverb emerged from online dictionary creator Wordnik, launching as a new company at the beginning of 2013 with the same team and aiming (as CEO Tony Tam explained at the time) to use Wordnik technology to “make tools for content understanding at every level from the single word on up.” Its first big launch was a mobile app that promised to find news stories and other online content tailored to your interests.

Now Reverb is launching a publisher tool called Reverb Insights with that same interest-based approach. Tam said other analytics products might tell you that an article is trending, but Reverb can help you understand why, because it can offer a more nuanced analysis of what an article is really about.

Some of this might be obvious to publishers already — I mean, I can tell you without looking that stories about Apple tend to do really well at TechCrunch. However, there are insights that are less obvious. For example, Tam said a news story about a celebrity death might be taking off, and the obvious conclusion would be to do more celebrity gossip stories. However, Reverb Insights might understand that the story was also about grief, and that’s what people responded to, not just the fact that it involved a celebrity.

In the screenshot at the top of this post, you can see how Reverb might slice up the different audience interests for one site. It can also help you compare audience interests with the content you’re actually producing — you might realize that you’re publishing a lot of articles about national politics, yet the stories that get the best response are about security or local issues. Now, that doesn’t mean you have to do more stories about those other topics, but hey, you could invest more in those stories, and if not, it’s still good to know that there’s a disparity. 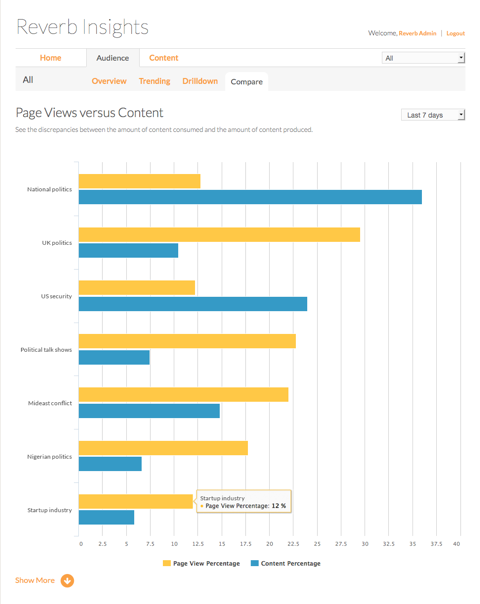 In addition, Tam said Reverb can build a model of a site’s audience, which in turn can be used for personalized content recommendations and messages. That means sites could use this to provide “You Might Also Like”-style links that aren’t just pointing to clickbait.

“The most powerful thing that we’re doing is, we are understanding users — and not based on who they’re connected to, but based on what they actually read,” Tam said.