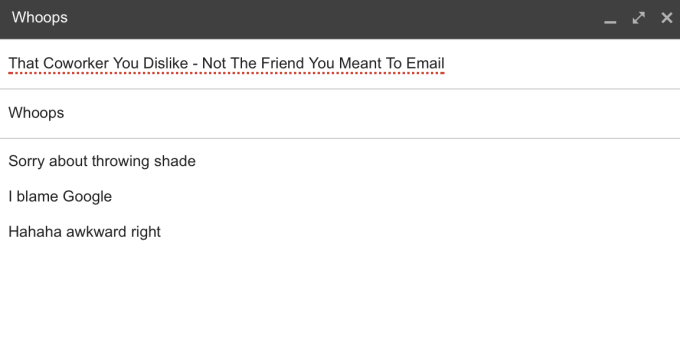 Sending email to the wrong person is probably among the top five most awkward things you can do in a professional context. Whether you’ve accidentally let confidential info slip to a third party or simply aired frustration to someone who doesn’t need to hear it, dealing with mis-sent email is never fun.

Hence the frustration coming from Gmail power users dealing with an auto-complete bug in the recipient field. Over the last few days, a number of venture capital and startup folk have come forward with complaints ranging from mild frustration to anger:

@pmarca they changed something in the last 5 days. It's become pathological.

@sama I have. It’s terrible now.

We’ve reached out to Google, who’s confirmed that there is in fact an issue in Gmail’s auto-complete function. A Google spokesperson gave us the following comment: “We’re aware of an issue with Gmail and auto-complete and currently investigating. Apologies for any inconvenience.”