Beatport is where the world’s DJs buy their music, but they could only listen to two-minute samples. Now Beatport hopes that by giving away free unlimited streaming, it can drum up more sales. Today Beatport sent out private beta invites for its new dance music streaming service, and we’ve got the first look.

Founded way back in 2003, Beatport’s store provides high-fidelity downloads of electronic music tracks for DJs to play during their sets. Eventually it got bloated with a DJ-to-fan social network and a platform for finding music stems to make remixes. After getting acquired by electronic dance music (EDM) conglomerate SFX in early 2013, it doled out a round of layoffs to axe divisions that weren’t making money.

Now Beatport is revving up for a complete overhaul of its product. The music store formerly known as Beatport now goes by Beatport Pro. The News section still offers updates, interviews, videos, and more from today’s top electronic musicians. And a still-in-the-works Shows section will let you scan concert listings and make a calendar of upcoming gigs.

What’s new is the streaming service, known simply as Beatport. You can request an invite for early access here.

Its web interface is focused around browsing and discovering music, rather than searching and playing what you already known. The home page highlights featured artists, chart-toppers, themed playlists, editors’ favorites, and club classics. You can favorite tracks to collect them for later and display them on your profile. 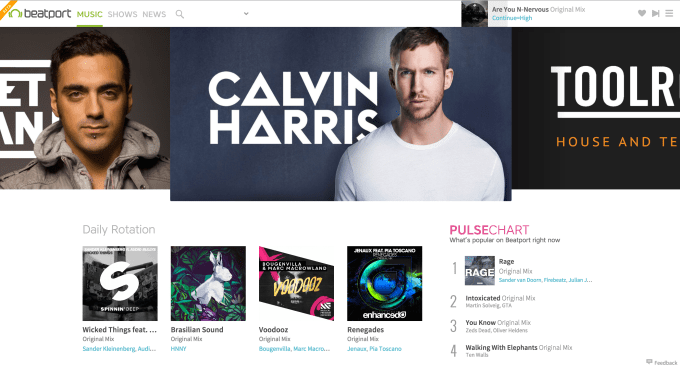 Every song can be instantly streamed in its entirety for free through Beatport’s embedded player. It keeps songs bumping as you browse around the site. Solving one of streaming music’s biggest annoyances, playing any track automatically cues up the rest of the chart, playlist, or album you found it on. That means you’ll rarely end up sitting in silence.

[Update: One major element that’s lacking is the ability to browse by genre. You can find some genre playlists at the bottom of the home page, but there’s no way to see all the songs or artist from a category like you can on Beatport Pro. That could make discovery messy for DJs who stick to a specific style.]

Still, the whole Beatport site feels smooth and polished, embracing minimalism over the half-baked features found in some streaming competitors. It’s remarkably usable for a v1 interface, and captures the slickness of the genres it carries. 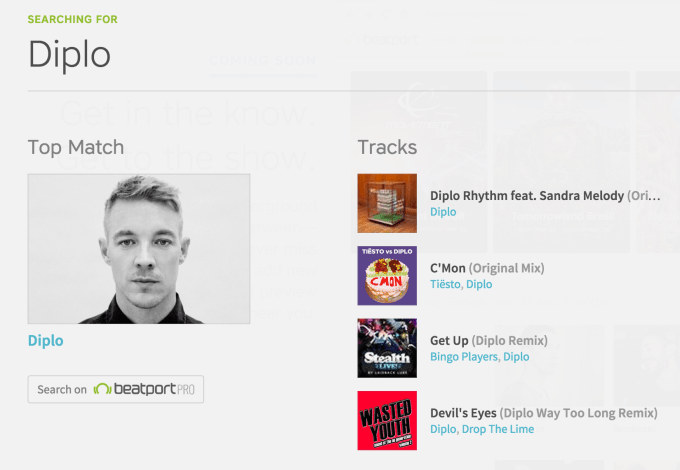 Beatport’s catalogue includes plenty you won’t find on Spotify, including obscure tracks and remixes. This could make Beatport a bridge between the squeaky clean legal fare on Spotify’s well-designed app, and the long-tail of legally gray remixes and mixsets on SoundCloud’s clunky service. 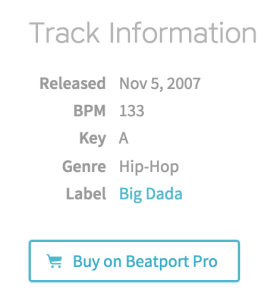 Beatport’s streaming site ties directly into the Beatport Pro download store so you can quickly discover, listen, and then scoot over to buy a song. That’s how the streaming gets paid for. No ads, no subscription fees. It’s just a loss-leader for the store. That’s a novel approach uniquely fit for DJs who are some of the only people on earth who still need to buy music. Low bitrate streams don’t cut it on massive soundsystems.

[Update: There an alternative potential strategy behind the overhaul. Maybe Beatport’s parent company SFX just doesn’t really care about selling songs to DJs any more. While a healthy market, it’s nowhere near as big as appealing to the mainstream dance music listener. SFX could use the Beatport streaming service as a way to stoke relationships between DJs and fans in hopes of monetizing them elsewhere, such as through the music festivals it owns including Electric Zoo and Tomorrowland.]

Plenty of electronic musicians were already using the Beatport store’s samples to discover songs. Now they can listen to the full-versions in all their glory as they decide if a track is worth a few bucks to buy. The new Beatport doesn’t need a mass audience. If it can convince DJs its the best way to find songs for their sets, subsidizing listening royalties to score lucrative purchases could bring streaming and sales into harmony for Beatport.