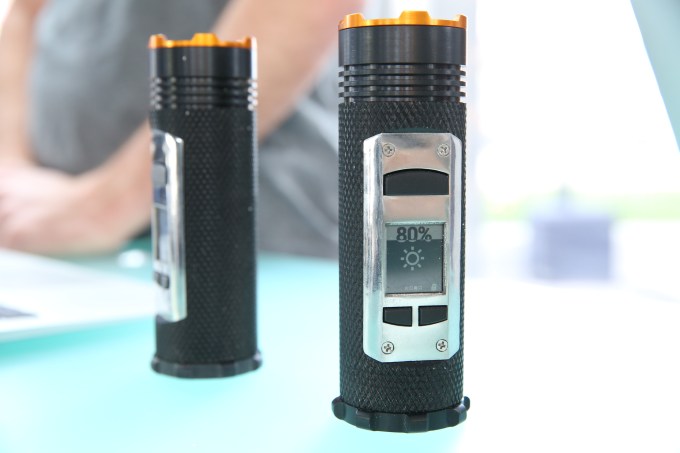 Fogo Digital, who you may remember as a competitor in this year’s CES Hardware Battlefield, has launched their smart flashlight on Kickstarter.

For those with fuzzy memories, Fogo’s flashlight comes with GPS receiver and screen for showing your coordinates, a USB port for charging your phone from the flashlight’s rechargeable batteries, and a smart cap port for adding proprietary modules that Fogo plans to sell separately down the road.

Since Fogo’s presentation in January, we’ve gotten more concrete details on pricing and timing for the flashlight and modules. The earliest backers on Kickstarter can pick up the flashlight for $175 without a module or for $225 with a walkie-talkie. After the early-bird specials end, both of those prices go up by $25.

After the walkie-talkie, Fogo plans on releasing caps for the flashlight that will include a satellite modem, laser rangefinder, or avalanche beacon. Fogo co-founder Tyler Gilbert told me last week that the satellite modem is top priority, and that the startup aims to release it early next year. Other modules will follow throughout 2016.

There’s been a slight aesthetic change to the Fogo’s exterior design since we last saw it: the stainless steel bezel around the screen has been replaced with hardened plastic in order to boost the GPS’s reception. The company is also working on adapters for the flashlight for Garmin and GoPro mounts — if the campaign hits a stretch goal, Fogo plans to throw them in the box when they ship to consumers. If not, they’ll sell them separately after the campaign ends.

On the software side of things, Gilbert also explained a new feature called Active Battery Management. “Basically, we use GPS data, ambient light conditions, battery state of charge, and estimated trip duration to optimize the flashlight brightness levels and GPS tracking rate so the batteries don’t die mid-trip.” If you’re familiar with C++, Fogo’s offering an API that’ll expose those kinds of features to customers who want to fiddle with their own hardware.

The startup is hoping to raise $125,000 with their crowdfunding campaign, bringing their flashlight to customers in September or October, depending on whether they purchase the early-bird special or not.