This year, my New Year’s Resolution was to finally cut the cord. The timing is right, and the content selection available today on streaming services make the process much less painful than it was in years past. There’s plenty to watch – a glut of quality shows to keep me entertained for years, in fact. Meanwhile, my vastly reduced Verizon bill is the biggest payoff to come from the whole experience yet.

To summarize, I ditched Verizon cable TV, kept my FiOS internet service, and generally “watch TV” via Netflix, Amazon and Hulu Plus – all of which I pay for.

I invited readers to share their stories with me, and the responses have run the gamut – with everyone from teenaged TV viewers who cuddle up with laptops in bed, or supplement TV programming with YouTube videos and Twitch, to senior citizens watching over-the-air programs and not much else, to resourceful tech geeks figuring out how to turn old computers into DVRs and so on.

But one of the biggest pieces of reader feedback I’ve received to date had to do with antennas. There are increasing numbers of antenna users who have given up traditional television in exchange for free, over-the-air programming. For many, augmenting streaming services with free, live TV is just how it’s done.

I took a different path, though, choosing only to rely on streaming services. And people couldn’t believe it! 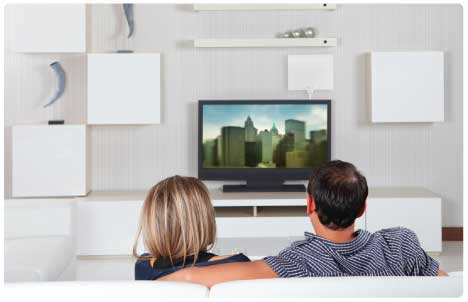 An antenna felt like a band-aid to me, or perhaps just another kind of “cord” – one that didn’t cost anything, but kept you tied to traditional, “appointment” TV. A device that existed because the streaming services can’t deliver everything you need at this time.

Don’t get me wrong. I do understand there are gaps still to be filled. It’s nice to have an antenna for watching live sports (though I don’t) or big events (like the Oscars), or because you just can’t wait until the next day to watch the latest episode of The 100 (or insert your favorite show here).

But most of what the antenna provides – network programming – is either available on streaming services like Hulu, or can be bought via Season Passes on iTunes or Amazon, for example. For me, the antenna just doesn’t feel essential. Your mileage may vary.

For Cord Cutters Who Like Their Antennas, An Over-The-Air DVR

However, one thing that interested me about the antenna option was how it could be combined with a different type of DVR – one designed to record programs over-the-air. If this works well, you could theoretically ditch Hulu and still have access to much of the network programming Hulu offers. Of course, that would mean that you have to live without Hulu’s original programming, its expanding back catalog of older shows and its movie selection. You might not be willing to give all that up.

But if you primarily subscribe to Hulu just to watch a handful of new primetime shows, the DVR option is intriguing. 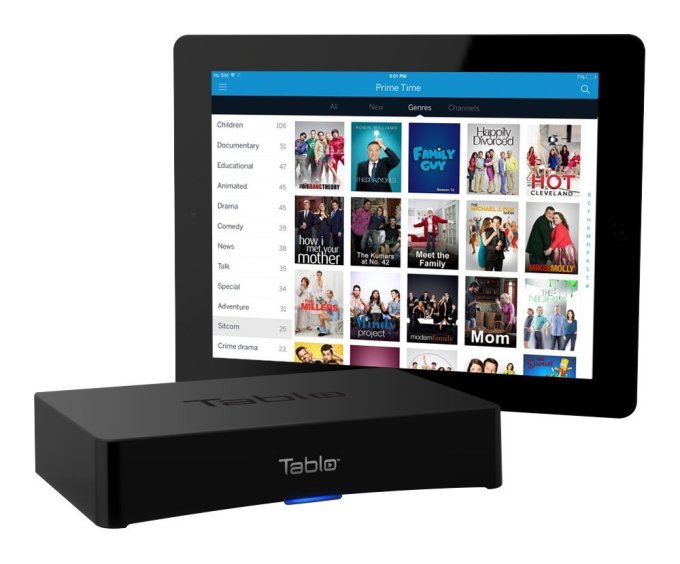 Plus, with DVRs, you’re not dependent on Hulu scoring a licensing deal with a given network for its content, which is something that’s still an issue today. For example, CBS keeps a lot of its top shows for itself. If you try to watch them on Hulu, the service redirects you to CBS.com instead. That’s because CBS wants you to upgrade to its “CBS All Access” service in order to watch more full episodes than it provides for free.

These content battles are always a challenge, and being dependent on streaming services alone mean you often lose access to a show.

Oh, and let’s not forget the best thing about DVRs: you can fast forward through the commercials!

This Week’s DVR: The Tablo

This week, I tried out the Tablo DVR, which competes with offerings from TiVo, Simple.TV, and others.

Like some of its competitors, Tablo works with your own USB hard drive. That gives you some flexibility in terms of storage capacity, but it also leads to a sort of junky-looking entertainment center where you’ve now piled on two more boxes where before, with your old cable TV subscription, you used to have just one. 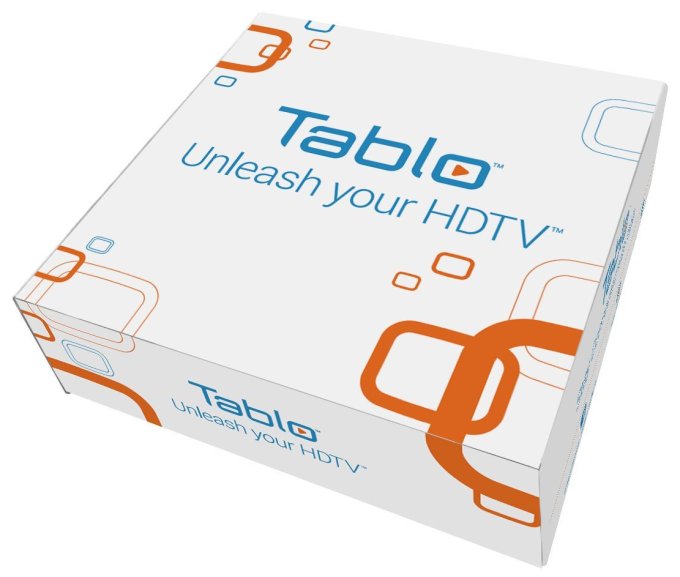 The DVR also requires an antenna in order to work. I plugged mine into the Mohu Leaf 50, which was able to pick up more channels than my old antenna did. But I have to admit I find having an antenna aesthetically displeasing, despite this being one of the “better” options when it comes antennas that blend in with walls, and are thin and easy to hide behind furniture. It just so happens that my walls aren’t white like this antenna, and there’s no furniture in my entertainment nook that can hide it. However, thanks to the included tacks, it’s easy enough to mount.

Hooking up all the pieces to the Tablo DVR system isn’t hard – you plug in the antenna, hard drive and power plug. You can also plug it into ethernet, if you choose, but most will probably set up the system over Wi-Fi.

To get going, you download a mobile application to your iOS or Android device, or use a web browser to begin the setup process. Setup is simple enough – following the on-screen instructions, I connected my iPhone to Tablo’s Wi-Fi network, then configured it to use my home FiOS Wi-Fi by selecting it and entering the password.

During the first-time setup, Tablo will also need to format your USB hard drive. This can take up to an hour, says the company, depending on the size of your drive. You can, however, continue the setup process while the formatting runs in the background. 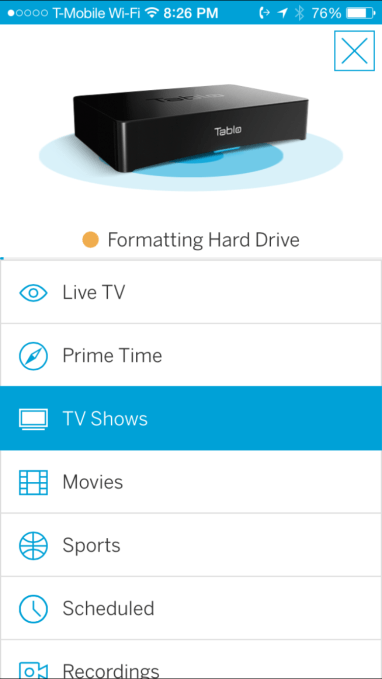 You also need to go through the process of having Tablo scan for channels, much like what you have to do on a TV before you can watch over-the-air programming. This seemed to run a little slower than when I did the same thing on my television set directly before I had the DVR. But after a few minutes, Tablo found my local channels, helpfully identifying them with red, yellow and green dots, so you can determine which are of high enough quality to be worth adding. 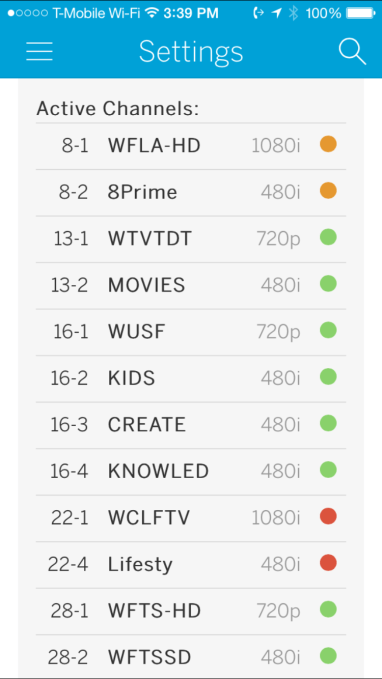 When the scan is complete, you check the channels you want to add them to the guide. Here, I did run into an issue – some of the channels I checked (which were green and fine to add) didn’t seem to make it into the guide the first time. That was frustrating not only because I had to then re-scan the channels and repeat the process again, but also because the process of “updating” Tablo’s guide is painfully slow.

At first I thought there was no progress indicator for the guide update, until I realized a few minutes later that the very small blue dot on the left side of the screen was actually the beginning of what ended up being a very slow-moving progress bar. To give you an idea, the company says that the download takes “several minutes” per channel added.

And it’s only downloading the first day of programming! The remaining 13 days are downloaded in the background, and afterwards, the guide updates take place overnight. 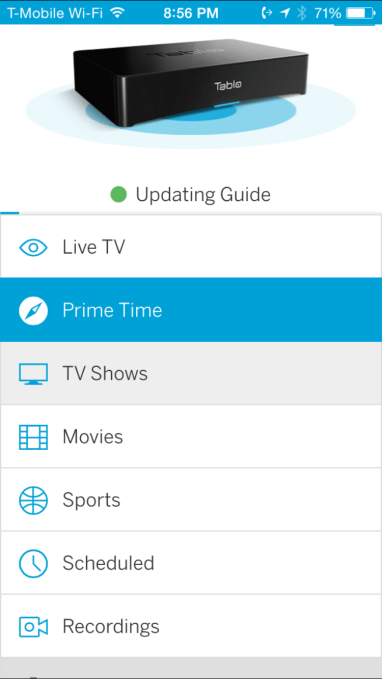 Still, these issues were more of a one-time challenge, rather than ongoing problems. However, the takeaway was that while Tablo might be something I’d recommend to a fellow TechCrunch reader who can handle software that has a few kinks, I might not be prepared to recommend it to say, my mother-in-law or my dad at this time.

After the setup completes, using the app to browse live TV, schedule or view recordings is easy. Navigation is self-explanatory. There are sections for Live TV, Prime Time, TV Shows, Movies, Sports, Scheduled, and Recordings, allowing you to find what you want to watch fairly quickly. The guide itself is also searchable, and you can filter it by new programs, genres or channels, much like you probably did with your cable company’s TV guide.

Some of these views, however, including Prime Time, Movies and Sports, are only available to Tablo subscribers, as are the filters on the guide itself (New, Genres, etc.). Things like the cover art used on TV shows’ thumbnails and episode details are also only for subscribers. It seems the company is not gently pushing, but rather shoving, its users to its paid tier. 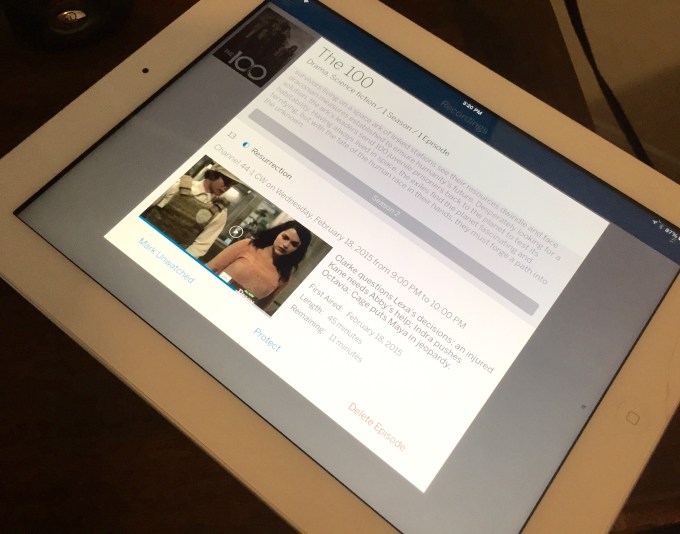 Meanwhile, when selecting a channel to watch live, there’s a bit of delay. It’s just long enough to have you wondering if the channel is not coming in, or thinking you have some other technical problem.

Recording programs, though, is easy – you just tap the “REC” button next to a show. If you don’t have a subscription, you have to record programs manually. Only subscribers can schedule recordings, with the ability to set recordings by series, season, or by new episodes.

Subscribers also have access to live TV guide data for 2 weeks in advance and can watch Tablo DVR content from outside the home.

The price is $4.99 per month for this, which is less than Hulu Plus’s $7.99 per month if you’re thinking of switching. 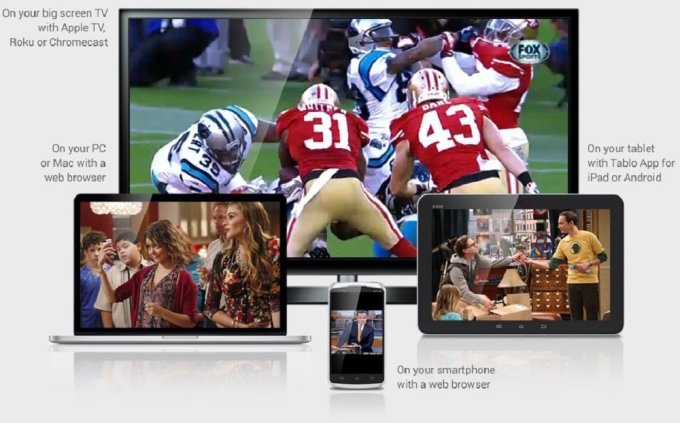 While cable companies are still working to score content deals that allow them to bring live TV to mobile devices both inside and out of the home, the nice thing about Tablo is that you can watch TV from anywhere. You can watch from a computer or phone via a web browser, from an iOS or Android tablet, or even on the big screen via Roku, Chromecast or Apple TV (via AirPlay). And if you pay, you can watch live or scheduled shows when you’re not on your home’s Wi-Fi through the Tablo Connect feature.

The flexibility is nice, especially because, as a cord cutter, you find yourself “watching TV” from a variety of devices and locations, since you’re no longer tied to a sofa and big screen. Tablo easily fits into this lifestyle.

While this is only one of several OTA DVRs on the market today, the question you may be asking is not really whether Tablo is right for you, but whether or not an OTA DVR is right for you.

Tablo’s glitches are not so bad as to not make it worth the investment (currently ~$200.00 plus the optional monthly fees) – especially if you find yourself missing the ability to record shows, or have a huge aversion to commercials. 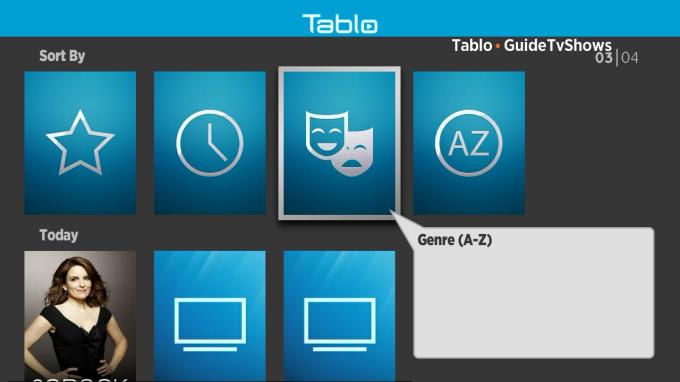 That being said, the software itself is imperfect (and its Roku app is ugly!). It lags in between screens sometimes and isn’t always as responsive as you’d hope. And Tablo practically cripples its free application.

Plus, the quality of recordings – of course, this depends on signal strength and other factors – was sometimes less than ideal. The differences in the brightness and clarity of a show that came in solidly over-the-air and that same episode bought and paid for on Amazon were remarkable. Amazon’s copy was vastly better. You get what you pay for, perhaps. 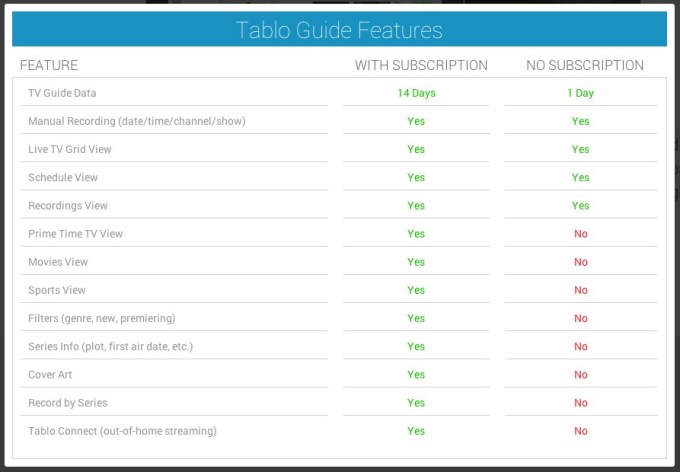 I’d say that if you’re still heavily dependent on your antenna, and find yourself watching a lot of network TV or sports, having an OTA DVR is definitely useful.

As for me, however, I’ll probably only use it for my occasional live TV needs, and maybe a handful of “special event” recordings. Most of what I’m watching is either a Netflix or Amazon-hosted series, or something I’m specifically subscribing to via a Season Pass. There are only a small handful of “currently airing” shows I need to see.

In the end, live TV, and the ability to record from it, seems like a transitional step in between cable TV’s heyday and the on-demand future of television. It’s nice to have for now, but eventually, everything will just stream.

Email me your cord-cutting story, or your Netflix recommendations: sarahp@beta.techcrunch.com