Following an earlier integration with Dropbox, Microsoft announced today it’s further opening up its Office software suite to work with other third-party cloud services, starting with an update to its Office iOS applications that will allow access to iCloud and Box. The support is being added by way of “file picker” integration, which takes advantage of the iOS software’s ability to open files stored in other locations.

For end users of Microsoft Office, the change means they’ll now be about to open, edit and save documents stored in third-party services from within the Office apps, the company explains in a blog post announcing the news. While iOS is first to receive the update, Microsoft says similar functionality is being added to the universal Windows 10 applications as well as the Office for Android applications.

The added support for third-party services is notable for Microsoft, which historically had operated as more of a closed company that tried to keep its customers inside its own ecosystem. But that’s been changing as of late – Microsoft has been embracing other platforms not only with the launch of Office for iOS late last year, and more recently, Outlook for iOS and Android, for example, but it has also recently passed 100 iOS and Android applications in total.

In addition to the support for other cloud services in the updated Office apps, Microsoft also announced the debut of a new Cloud Storage Partner Program, which will see the company working more directly with third parties to integrate Office Online into their own applications. This will allow those companies’ users to then open, view and edit documents saved in their services using a web browser that accesses Microsoft Office online. The program’s early partner list includes Box, Citrix and Salesforce, says Microsoft, but others can apply to join through a sign-up form here. 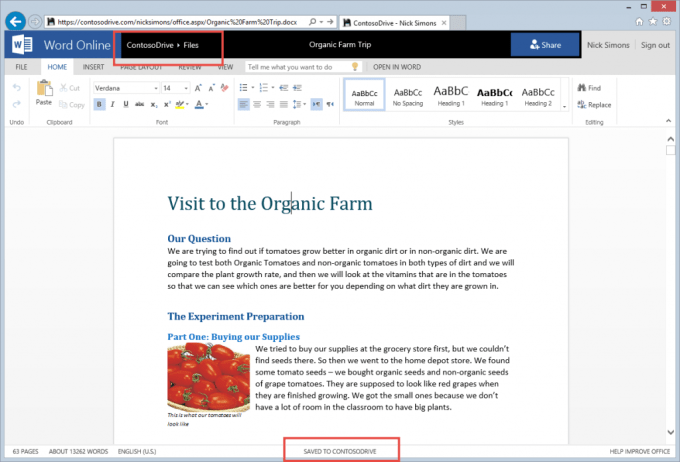 Specifically, the integrations will be focused on allowing consumers to edit and view Word, Excel and PowerPoint files, and currently supports only a single editor at a time. However, Microsoft says its intention is to later expand the experience to allow for improved sharing and collaboration features over time.

Absent from the list of new partners announced today, however, is Google, whose own online office suite is more of a direct competitor to Office than potential partner, it seems.

Still, the changes have earned Microsoft praise from Box CEO Aaron Levie, who posted to Twitter in support of today’s news, noting the “new level of openness” at Microsoft, and complimenting Microsoft CEO Satya Nadella for pushing things forward:

Microsoft is driving a new level of openness in the enterprise. Props to @satyanadella and team for pushing this. http://t.co/b07W2AesT5

Microsoft is truly becoming open. A huge win for customers and the industry. And a huge loss for Microsoft jokes. http://t.co/K8lRrNGih5