Hulu today is introducing a new feature called Watchlist, designed to offer users a smarter and more personalized area featuring the shows you’re interested in viewing. The addition actually replaces three others features on Hulu: your Queue, your Favorites and the Shows You Watch tray. Before, each of these three places offered a different window into your preferred content, but the Watchlist combines them into a single interface.

The Queue was where you lined up shows and movies you were planning to watch in the future, while Favorites was a list of your top shows. And then the “Shows You Watch” area would automatically update with a list of the programs you actually viewed – even if you hadn’t before labeled them as Favorites or added them to your Queue.

Watchlist instead becomes the place where you can track all this content, but in a more personalized way, explains Hulu.

Now you can follow shows by clicking a plus “+” button on Hulu.com on the web, iPhone or iPad, or you can select the “add to Watchlist” option on gaming consoles, connected TVs and set-top boxes, or Android devices. This offers similar functionality to the Queue feature, as Hulu will begin to automatically update with new episodes from programs you add to your Watchlist in this way.

However, what makes Hulu’s Watchlist different from something like Netflix’s “My List” option, or Amazon’s own “Watchlist,” for example, is that it begins to learn about your preferences over time. That is, the shows it displays are ordered based on your own viewing behavior.

In other words, Hulu learns about your “Favorites” for you – you don’t have to tell it anymore. So if there’s one show you always watch the minute it becomes available, that will now appear at the top of your list. Meanwhile, shows you only occasionally view will be further down on the page.

And after you get caught up on your favorite programs, your next favorite will then move into place at the top.

Watchlist will also learn exactly where you are in each show, so you can continue viewing an episode with just a click. Plus, on living room devices, a “Play All” option is also available so you can binge your way through everything. 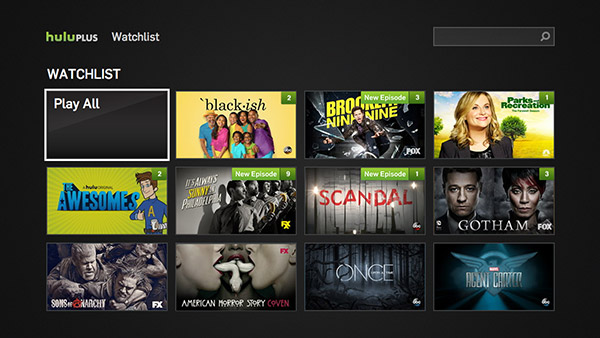 While a seemingly minor change to the user experience, Watchlist addresses one of the larger issues with streaming services today: they haven’t yet solved the problem of helping you find and remember what it is you really want to watch. Though Watchlist doesn’t address the first part of that struggle – it doesn’t recommend new content, that is – it does become something of a smarter “TV guide” of sorts.

That’s useful for those ascribing to a true cord cutting lifestyle, which is no longer defined by “appointment TV” where you tune in at a certain time to watch something live. Cord cutters don’t sit down to watch because such-and-such program is now on: you sit down because you want to relax with television, but then have to try to remember what exactly it is you have lined up.

And if you’re following a large number of shows, diving into Hulu’s Queue before involved a lot of clicking around before to see how far behind you were on various programs. Watchlist helps here, too, as it flags right on the shows’ thumbnails which have unwatched episodes and whether or not they’re new.

Unfortunately, where Hulu still falls short is on offering an experience where you can truly sit down and fully binge your way through a new series. Many of the shows on Hulu only offer the most recent handful of episodes. And your access to this content eventually expires in most cases, because of how Hulu’s programming partners structure their deals. The Watchlist feature would then be good to offer a section or filter that lets you see your expiring content, or at least bump it up to the top so you don’t miss out.

The new feature is being made available now on the web, iOS and Android devices, Apple TV, Roku players and TV models, PS3, Amazon Fire TV, and Samsung TVs and Blu-ray players, and is rolling out over the months ahead to other devices, too, says Hulu. If you’re not yet seeing it, however, you can opt-in directly by going to Hulu.com/getwatchlist to be among the first to try it out.