News In Shorts, an India-based company that operates a news digest app for iOS and Android, has raised a $4 million Series A round led by Tiger Global.

The funding round for the New Delhi-based startup included participation from Japan’s Rebright Partners and existing investors Sachin and Binny Bansal, the founders of e-commerce firm Flipkart. The startup raised an undisclosed seed round last June, and counts media firm Times Internet among its backers.

News In Shorts is an interesting service that has comparisons with Yahoo’s News Digest app and mobile news startup Circa. It provides its target audience in India with 60-word summaries of the day’s top stories, that’s typically 60 summaries spanning a range of categories including sports, entertainement national and international news. Each summary is written by its in-house team of editors, and includes a single link out to a story with further information, while readers can opt in for push notifications.

“The idea is that readers should have enough of an understanding of a story within 30 seconds of reading,” founder and CEO Azhar Iqubal told TechCrunch in an interview. “We use a team of editors because we believe that technology is not up the mark.” 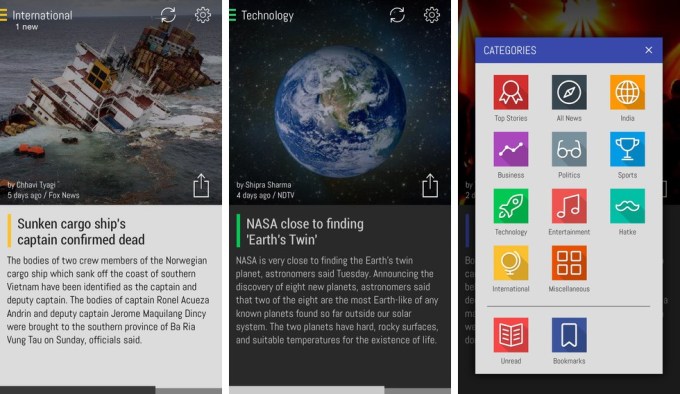 The company actually went Android-first in India, launching its app 18 months ago. Iqubal explained that it didn’t have the resources to cover both Android and iOS, and went with the Google-owned platform because “Android has much better penetration in India.”

News In Shorts finally released an iOS app this year, and together its apps have been downloaded over 100,000 times. Iqubal said the company sees 10,000 downloads per week.

Those figures are promising, but nothing to write home about. So why is Tiger Global leading a $4 million investment in the company?

Iqubal said the global investment giant — which raised $2.5 billion in new funds in November — is impressed by usage of the app. Around 40 percent of all registered users log in each week, while its daily users browse an average of 50 stories per day.

With this funding, Iqubal is aiming to grow News In Shorts to between 2.5 million and five million downloads by the end of 2015. First priority is to double the daily content to 120 summaries. To make that happen, the 16-person team will grow to 60 over the next few months. Half of that number will be editorial, with the remainder split between tech and operations/marketing, he added.

Iqubal is also interested in opening the service to third-party contributors, such as professional writers who would be vetted by the company and then invited onboard to contribute. This model could increase the service’s daily content to more than 1,000 stories. That plan is still in its early stages, but he believes that writers could be paid based on viewing figures or potential ad revenues in the future.

That brings us to the News In Shorts business model. To keep it brief — like the app — there isn’t one yet.

Iqubal is focused on growing the product and its userbase first. NewsHunt, another news aggregator app in India which recently raised $40 million, is shifting beyond news and to a digital marketplace and payments. News In Shorts could take a similar path given the engagement that it sees from its users, or go down the advertising route.

The story of how News In Shorts caught the attention of investors is one that tells of India’s growing maturity as a startup country.

Co-founders Iqubal and Anunay Arunav attended IIT Delhi, the alma mata of Flipkart’s two founders. (A third News In Shorts co-founder, Deepit Purkayastha, attended IIT KGP.) Word of the app got out via the alumni network, reaching Sachin and Binny Bansal who downloaded it and became users.

Last summer, the Flipkart founders — who have raised more than $2.7 billion for their e-commerce firm to date — contacted News In Shorts’ co-founders with an investment offer, which evolved into a seed round led by the founders of Travel Boutique Online. Iqubal said the Bansals — who are not brothers — introduced News In Shorts to Tiger Global — one of Flipkart’s early investors — which got the ball rolling for this Series A round.

“We admire News In Shorts for its dedication to create disruption in the news space. We believe in the immense potential and high traction that the application is already getting, and this round of funding will give wings to their ambitions,” said Sachin Bansal in a statement.

Tiger Global’s Lee Fixel added that the startup “can revolutionize the way content is being consumed on mobile devices. The 60­-word news ‘shorts’ is just a step towards that goal.”