LG was among the first wave of smartphone makers to venture into smartwatches. The G Watch and G Watch R are probably among the best in the market right now — not that this statement says much — but LG just announced its latest addition, the LG Watch Urbane, as Apple prepares to enter the space.

Unlike its previous watches, LG is positioning this new one as a classic timepiece that — it believes – will appeal to both sexes, rather than just the geeky, male audience that has largely adopted the industry’s first smartwatches. The LG Watch Urbane is available in silver or gold and comes with a natural leather strap, but owners will have the option to switch it with any 22mm-wide band for regular watches.

The watch keeps the 1.3-inch, circular plastic OLED face of the G Watch R, but is the Korean company’s first all-metal smartwatch. The device runs Android Wear and is powered by a 1.2 GHz Qualcomm Snapdragon 400 chip. 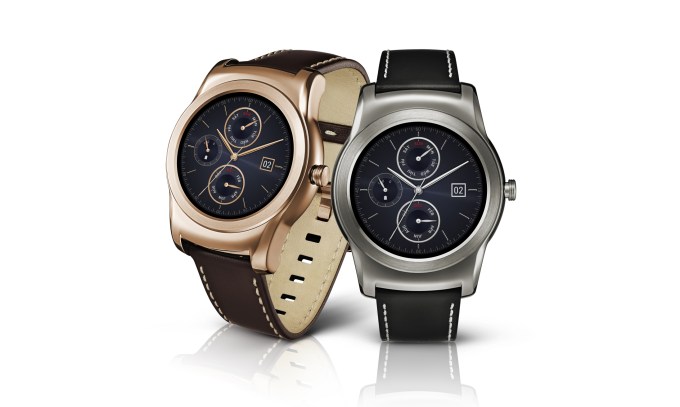 “The LG Watch Urbane’s classic design and smart features make it the perfect smartwatch to complement our G Watch and G Watch R, which were designed as more casual and active devices,” commented Juno Cho, president and CEO of LG Mobile, in a statement.

LG said it will show off the LG Watch Urbane at Mobile World Congress in Barcelona this month. We’ll be at the show, so stayed tuned for more details, photos and more about it.

The company’s decision to now focus on the non-geek audience with a smartwatch comes just weeks before the Apple Watch is expected to arrive. Apple CEO Tim Cook teased an April launch date for the much-anticipated watch, which many analysts believe will kickstart consumer interest in the smartwatch segment.

A report from Canalys released this month estimated that 720,000 Android Wear-powered smartwatches were shipped in 2014. The analyst firm estimated that Motorola’s Moto 360 led the pack, but Apple’s entry — while providing competition — could also help the wider industry gain greater exposure and awareness beyond the early adopter crowd.