500 Startups, the U.S. startup investor/accelerator with a reputation for backing startups across the world, is deepening its efforts in Asia with a new $10 million micro-fund for Thailand. The organization launched a $10 million fund for Asia — ‘500 Durians’ — in 2013, but this new one — ‘500 TukTuks’, named after the iconic taxis pictured above — is dedicated to Thailand, a country where there are few VC firms.

500 Startups declined to comment on the fund when we contacted the company, but TechCrunch has reviewed pitch documents provided to investors and confirmed its existence with multiple sources within Thailand’s startup community.

The fund is not closed yet, but a formal announcement — including details of its first investment(s) — is expected to be made next month.

500 Startups has already invested in more than eight Thai companies via 500 Durians, so now it is doubling down on the country. It plans to use half of the 500 TukTuks fund to invest in early-stage startups — that could potentially involve as many as 67 deals — with the other half allocated to follow-up and later-stage funding.

According to documents, 500 TukTuks will provide an average of around $75,000 as a first investment, usually as part of a seed-stage round with other investors. The fund will cut checks of upwards of $150,000 for follow-on investments in startups “that show signs of becoming big winners.”

The fund is being pitched with a general focus on startups that draw on inspiration from proven international and regional business models and have the potential to grow in Thailand, Southeast Asia and beyond.

500 Startups is the highest profile investor to focus on Thailand to date, and its fund is managed by two of the country’s most prominent startup figures: Natavudh “Moo” Pungcharoenpong, CEO of Ookbee — a digital publishing startup that has raised over $8 million — and Ruangroj “Krating” Poonpol, a former U.S.-based Googler who runs ‘Disrupt University’ — a program to increase Thailand’s links with Silicon Valley and mentor young entrepreneurs — and is a director with Telenor. Khailee Ng, 500 Startups’ Southeast Asia-based managing partner, is involved as an advisor.

TechCrunch understands that the 500 TukTuks team has pitched a range of prospective LPs for its fund since December. That list spanned traditional institutions, dedicated startup investors, high-profile business figures and private individuals, including Thailand’s former finance minister Korn Chatikavanij — pictured below meeting with Pungcharoenpong and Poonpol. 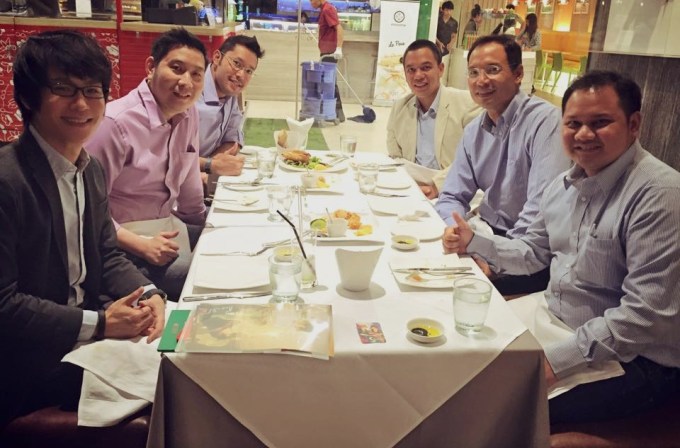 “We believe the Thai market is hot, and we’re seeing liquidity avenues open up for startups in the region. This makes for a valuable opportunity for early-stage investing,” 500 Startups wrote in its pitch to investors.

Thailand has traditionally been overlooked in favor of the more advanced economies of Singapore and Malaysia, and Indonesia’s 250 million population, but it is an interesting market for a number of reasons.

Its 65 million population is significant, while over 40 million are estimated to enjoy internet access thanks to the growing adoption of smartphones. Japan-based mobile service Line is the dominant social network in the country, its 35 million registered userbase beats even Facebook, such is the mobile-first focus of the internet. A number of startups — Ookbee included — have latched on to that potential, and the local ecosystem is growing quickly; 500 Startups claims domestic startups have raised $25 million over the past two years, up from practically nothing before then.

All three domestic mobile operators run their own accelerator programs, co-working spaces have sprouted up across Bangkok and the rest of the country, and the local events schedule is busy, yet there are few investors. Indeed, the VC scene is so nascent that Natavudh is one of the country’s most prolific seed-stage investors — having backed eight companies over the past year alone — despite his full-time role as CEO of Ookbee, which is valued at $70 million and probably Thailand’s most successful startup to date.

500 Startups aims to be an early mover in the Thai scene, which currently counts a clutch of angel investors, and dedicated funds from the likes of Inspire, Ardent Capital, CyberAgent and InVent/InTouch.

The U.S. firm first made connections in Thailand in 2013, when its ‘Geeks On A Plane’ tour visited Bangkok as part of its inaugural trip to Southeast Asia. The tour returned to Thailand’s capital city, alongside Singapore, Indonesia and Malaysia, last year and is likely to do so again this summer.

Aside from its global funds and 500 Durians, 500 Startups also has a dedicated fund/accelerator for Mexico — 500 Luchadores — while it has ongoing plans for a fund for India. Beyond geographies, it focused on mobile startups with its newest $10 million ‘Mobile Collective’ fund.