From gizmos to trinkets: the era of smart jewelry is upon us, with makers and businesses of all stripes and sizes busy mixing electronics and sensors with ‘fashion-friendly’ designs intended to be displayed proudly on the person.

Sure your Fitbit wristlet is technically a wearable but it’s not going to be garnering aesthetic attention and is probably intentionally tucked under your cuff. (Perhaps to hide the rash it’s given you…). And so another category of wearables is hoping to push in here — trying to convince consumers to shell out for a trinket whose primary ‘smart’ is the ability to change how it looks, mostly just for kicks and/or notifications.

Last fall, for instance, Sony outed a minimalist e-paper smartwatch, called the FES Watch. It’s due to ship later this year. The watch face and band designs can customizable by the user, thanks to the use of low-power e-ink tech. This is e-ink as a fashion fabric.

And that’s just the vanguard. E-ink’s low power consumption gets round the primary problem of current gen wearables: sucky battery life. So expect a whole lot more of this pattern-shifting stuff to start cropping up.

To wit: tago arc — an e-ink bracelet in the making. Its makers are currently passing round the donations bowl on crowdfunding site Indiegogo to raise $40,000 to turn their prototype into a shipping product by next December. 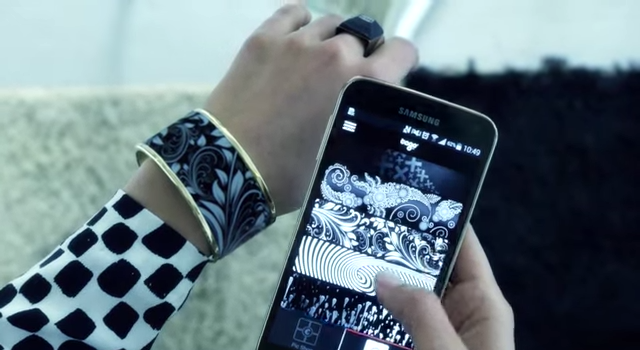 The bracelet will combine a flexible e-ink screen with NFC transfer tech so that a new design can be loaded onto the device via a companion Android app, using an NFC enabled smartphone or tablet to power the transfer. (Support for iOS devices is not currently possible owing to Apple locking down the iPhone 6’s NFC chip for Apple Pay only.)

So, to be clear, tago’s twist is that it needs (and has) no on-board battery. The NFC draws the power it needs for a transfer from the mobile device’s battery as and when the user is changing the design. When in its resting display state, e-ink does not draw power so no battery is needed to power the device at other times — so it’s a battery-free wearable. Or that’s the promise.

“Our current prototype can change display with a smartphone (through NFC, without external power), with the working tago app we developed,” CEO Zoli Kovács tells TechCrunch. “We are now working on the final design and software optimizations. The electronics (on flexible printed circuits, flexible display, etc) are ready to be put in the final commercial version of the tago arc.” 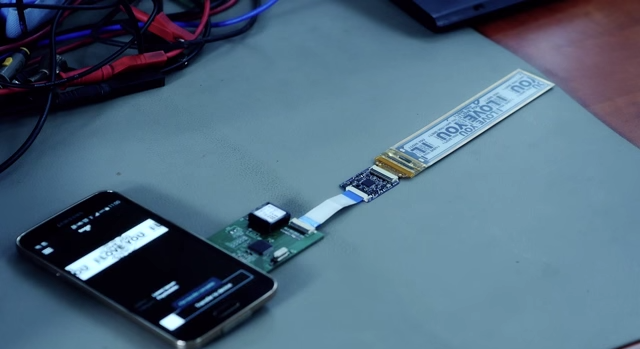 The choice of NFC also opens the bracelet up to functionality expansion in future, according to Kovács, who hints that contactless payments might be supported down the line “perhaps one day”. Although he also stresses that the primary motivation here is to build a wearable accessory that looks good, rather than to add on lots of functionality bells and whistles.

“We are not adding extra features onto the bracelet like incoming call/message or email display for now, we would like to just give you a revolutionary piece of accessory,” he says. “We believe NFC is the future (over bluetooth) and due to the evolving functionalities of it there are going to be several features that can be added on to the #tago arc bracelet later on — perhaps one day you will even be able to pay with it.”

If you’re feeling a sense of deja vu, that might well be because we saw a very similar looking smart, e-ink bracelet — which also lets the user change the display designs — at our hardware battlefield at CES, back in January.

That prototype device is being made by LookSee Labs. You can see it demoed in a video from our battlefield session. The main difference being that LookSee Labs’ smart bracelet does have an on-board battery — albeit one that its makers reckon is good for about a year’s use. So it does need charging, at least irregularly, but can also support more power intensive functionality such as slideshows. Not so the tago arc.

Although it’s charge-free, the tago arc won’t win any speed (or slick interface) awards for how quickly designs can be transferred to the bracelet (the process currently takes about 15 seconds, and the NFC tags need to be correctly aligned throughout so it’s a tad fiddly). But the team is promising transfer times will be sped up by around 4x in the finished product.

“We are currently in the process of optimizing our picture transfer,” says Kovács. “This means the modification of the compression algorithm. Currently on the prototype pictures are transferred without compression — so once we are ready for mass production the picture will be compressed to 1/4th of its original size, and the time to transfer the picture will also shrink to 1/4th of the current picture transfer time.”

Owners of the tago arc will be able to load their own designs onto their bracelet via the companion app for free. There will also be a marketplace for downloading and buying imagery and designs from others.

“Our artist community will price their own artistic contributions to the #pic market,” adds Kovács. “Our suggested price for them will be around $1-$2, but we will not pre-set the prices, we will let the supply and demand sort it out for itself. There is also going to be an option here for premium brands and designers to price their exclusive designs at a higher price.”

The bracelet itself will be made from coated surgical stainless steel, with gold, silver and black color options. The basic price for Indiegogo backers is now $259 per bracelet. Precious metal premium versions are also offered — at far higher cost.