Practo, an Indian startup that provides a search portal matching doctors with patients and other digital services for practices, has closed a $30 million Series B round to expand its services in India and other emerging markets.

The funding was led by existing investor Sequoia Capital with participation from Matrix Partners. Bangalore-based Practo raised $4.6 million in 2012, and closed a seed round in 2011.

The company’s primary platform is a doctor search portal, which allows patients to look up and book appointments with doctors across six cities in India. That service claims to be Asia’s top health search portal with 120,000 doctors on its platform, and 1.5 million visitors and four million searches per month. Outside of India, Practo has fledgling businesses in Singapore ( 4,300 doctors) and it recently launched in the Philippines.

Practo co-founder and CEO Shashank ND told TechCrunch in an interview that the funding will go towards scaling the business to reach 35 cities in India and at least four more international markets this year. Southeast Asia, the Middle East, South Africa and Brazil are among its targets. He anticipates that the company’s headcount will rise from 600 today to over 1,500 by the end of 2015.

Beyond The Patient-Doctor Portal

At first glance, the company is akin to a ZocDoc, but actually its business is more sophisticated than merely a search portal. That’s because it also offers a software-as-a-service platform — Practo Ray — that manages practices, organizing doctor schedules, collating patient notes, and handling payment, for example.

Practo’s search portal is free for patients and doctors alike. The company makes money by licensing Ray, and also through Google-style advertising on the search results within its consumer portal. 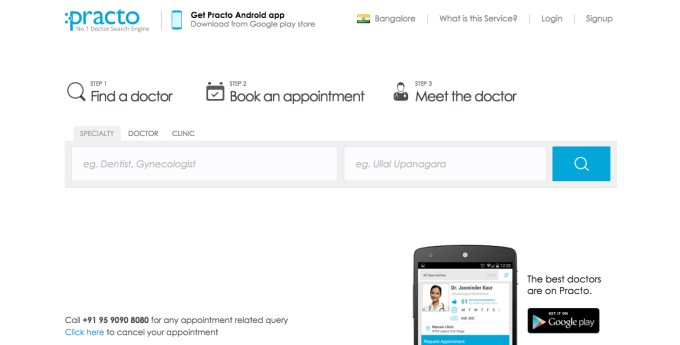 That dual approach provides plenty of synergy for the company — doctors and practices won’t want to turn away potential traffic from the main Practo service, essentially a free portal, and that hook gives Practo a chance to make money either via ads or Ray.

For example, Practo offers doctors who pay for Ray an ‘instant appointment’ option which takes advantage of knowing their schedule to book appointments with patients quickly. Shashank said that around 10 percent of doctors on the Practo India service are signed up for that feature.

With smartphone adoption growing faster in India than anywhere else in Asia, the company launched its iOS app this year — having debuted an Android app last year — and now it sees close to one-third of activity from mobile devices, with Shashank claiming mobile traffic doubled over the past month.

The growth of smartphones has seen a number of patient-doctor apps sprout up, particularly across Southeast Asia, but Practo was actually founded back in 2008. Shashank, then an undergraduate, ran into problems trying to get a second opinion on a hip operation that his father was due to undergo in India.

“I found it very difficult to get his patient records sent to the specialist in the U.S.. In the end, I needed to scan the records and upload the photos into an email to send over. When I asked the doctor [in India] he told me that his software didn’t have an email button,” he recalled, laughing.

That got Shashank and Practo co-founder and CTO Abhinav Lal started, but the duo have identified far wider possibilities with their company. While it is common for most startup founders in India to focus on the domestic market — that’s understandable given India’s billion-plus population — Practo is also keen to grow its international footprint.

“Our top priority is to serve India, and we see short-term growth primarily coming from India,” Shashank explained. “But, in the long-term, there’s a huge opportunity in emerging markets — and we choose to do both.”

Aside from aggressive domestic and international plans, Practo also plans to expand the scope of its service to cover diagnosis labs and hospitals. The model will be the same, provide a platform to help people connect directly for appointments and offer software to help manage organizations.

With its Series B round banked, the company doesn’t have an immediate plans to raise again, but Shashank accepted that the business will necessitate further involvement from VCs for acceleration, even though it is “moving towards profitability” in India.

“This is a capital intensive business, we see a lot of potential both in India and other emerging, so we’ll probably know [about the timing of our Series C round] in a few months,” he added.

One of the interesting things about covering emerging markets is observing just how many startups are rising out of markets like India and China with business models that are either not matched by companies in Western markets, or wouldn’t fit with industries in the West. In similar fashion to NewsHunt — the news app from India that raised $40 million this week and is moving towards being a digital marketplace and payments service — Practo is another ’emerging market model’ that is unique because… well, the emerging world and its needs are unique.

“The U.S. healthcare market is very different to that of India, so solutions will be very different too. In emerging markets, we’re seeing a different need for technology and how it can help. We aim to build our products to help patients live healthier, and to live longer,” Shashank concluded.