Uber has set the standard for mobile transportation apps, allowing customers to order, pay for and view their driver’s location right from their mobile device. Now, a new startup called Bringg wants to offer a similar level of visibility for any delivery-based service or those with drivers en route – whether that’s a mom-and-pop dry cleaner making their daily runs, restaurants making deliveries, or even service technicians heading out on calls.

The company was founded in 2013 by Raanan Cohen (CEO), the former founder and CEO of MobileMax; and Lion Sion (CTO), previously the CTO of GetTaxi and Clarizen.com. Bringg has been operating in a beta period over the past six months, testing the service with a handful of customers representing different types of businesses, including food-delivery services Lish and Zuppler, for example. It’s now launching to the public.

Explains Sion, the two co-founders had discussed the idea for Bringg as far back as two years ago while lamenting over the fact that the revolution that came about with transportation apps, like Uber or GetTaxi, hadn’t yet translated itself into other areas.

“Why is it that when I’m ordering pizza for my kids, we don’t know when the delivery person is coming, exactly?,” Raanan complained to his friend.

Recalls Sion, “he said, why is it that the same solution you have with taxis – why is it not yet out there for others?”

So the two began working to develop a way for any company to integrate an on-demand service offering an Uber-like user experience into their own products – web, mobile or otherwise. With Bringg, the idea is not to create consumer-facing mobile applications similar to Uber’s, but instead to allow a business to communicate with customers about the status of their driver’s whereabouts however they see fit. 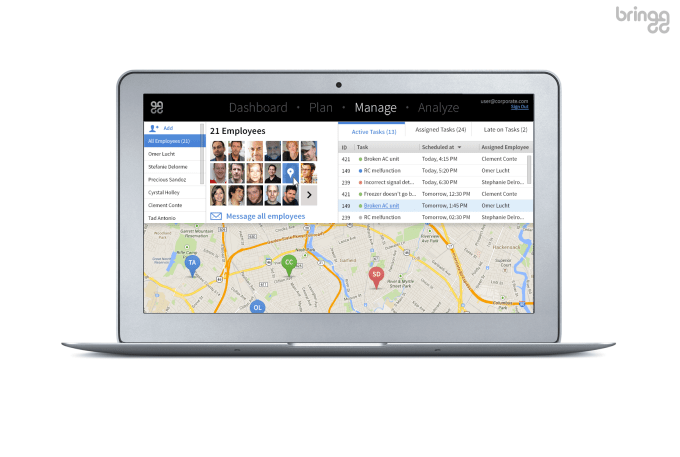 Businesses can opt to use Bringg’s web-based interface, its APIs and mobile SDKs for iOS, Android and JavaScript, or any combination they like. For example, a company could choose to send out an email or SMS containing a link that popped open an HTML5 web page that showed the driver en route in real time. Or the company could choose to integrate Bringg’s SDK into its own native mobile app, if one already existed.

Bringg’s technology stops short of handling order processing and payments. However, it’s able to integrate with a number of point-of-sale solutions, as well as online and offline ordering solutions, notes Sion. The service is sold on a software-as-a-service basis to customers starting at $10 per month per driver. A $20 per month per driver option is also available, which allows businesses to further customize the service – for example, branding it with their own logos or customizing the SMS messages customers receive. 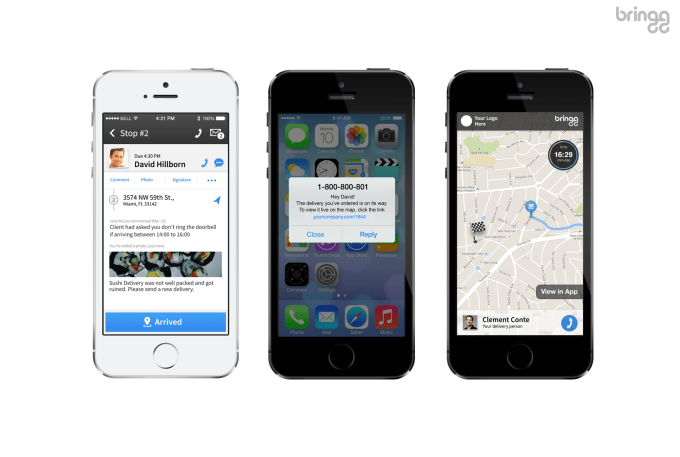 Meanwhile, on the business owners’ side, Bringg offers reporting features that help them gain insight into their deliveries, as they’re able to see things like how long deliveries take, or distances traveled, and more. Businesses can also manage and dispatch drivers, and track them in real time.

During the company’s beta period, Bringg found that they didn’t have to sell businesses on the concept of what they were offering, which is something that surprised them, says Sion.

“We thought we’d still be trying to convince people that on-demand is happening and it’s something you need to do,” he says. “But it turns out, everybody gets it…it was very easy to get people to join.” The company hasn’t yet done much PR or marketing, but already has 100 developers working with its products.

“People just heard about us and came,” Sion says.

Headquartered in Israel, but now expanding to New York, Bringg is a 13-person team and is backed by $2.5 million in funding from strategic partner ITURAN, a fleet-management company.