Every few years, auto-giant Toyota rolls out its latest idea for the future of “personal mobility” — pods that promise to take you from point A to point B with little excitement but lots of practicality. These rides often drive themselves, take up very little space, run on electricity, and let you catch up on stories saved to Pocket while you drive to meet a colleague for lunch.

This year, Toyota went in a slightly different direction. At a makeshift test track in a parking lot in San Jose, I got to take a test drive of the i-Road, a vehicle that fits a person and their bag (or a small child) and combines the ride characteristics of a miniature car and a motorcycle. 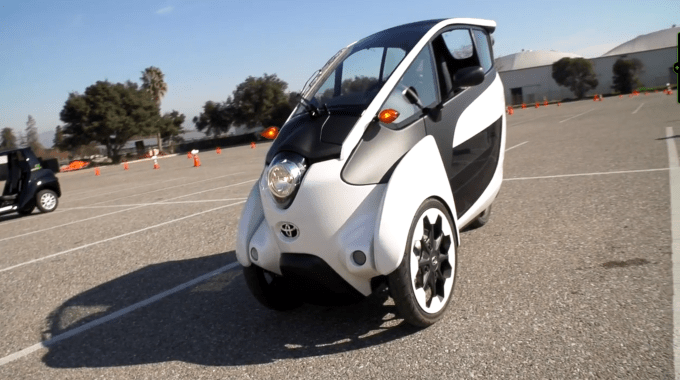 At first glance, the i-Road kind of looks like a Smart Car that someone put into a garbage compactor. It’s short, has a single door on each side, and just tall enough to accommodate someone of my size (I’m about six feet tall).

But the i-Road isn’t just a tiny four-wheeled vehicle. Up front, it has two wheels that extrude from the body which move to let the i-Road lean into a turn in the same way that a motorcycle leans with your weight. In the back there’s a third wheel that points straight forward at high speeds, but rotates to allow for very tight control at low speeds, perfect for wedging into that tricky parking spot.

It might be an exaggeration to say that i-Road reaches “high speeds,” as it caps out around 37 miles per hour. That’s not to say it isn’t fun to drive — during my laps in the i-Road I caught myself leaning into sharp turns, an odd sensation considering most enclosed vehicles actively push you *out* from experiencing G-forces. The minimal noise insulation also means you’re going to hear a lot of road noise and whirring from the electric motor. You’re not going to zip between cars on the interstate in the i-Road, but you certainly won’t be bored during your commute.

The i-Road is still very much a prototype, with some units in testing in dense urban markets like Tokyo. Toyota representatives on-site for our test drive compared its future niche to that of Toyota’s currently-available COMS, which sells for about $7-8,000 and is typically purchased for use in delivery fleets and to individuals who don’t want to deal with inclement weather on a moped. The i-Road certainly seems more than capable of fulfilling those roles, with the added benefit of not looking/driving like a high-end golf kart.