Today, Box, a company that sells enterprise file management and collaboration tools, announced ‘Box Enterprise Key Management,’ or EKM. The new service will allow corporate customers of Box to self-store and manage the keys to a second layer of encryption on their data. That takes access of the data out of Box’s hands, giving more control and security to the customer’s information.

Box currently encrypts customer data. EKM is akin to a second wall, the gate to which Box itself cannot open. That means that governments coming to Box and demanding certain user data might be met with a half-shrug from Box: We’d like to help, but we really can’t. The government would then have to go to the client to get the second key, ensuring that the data couldn’t be hoovered up without the knowledge of its owner.

To get the full technology stack in place, Box is working with Amazon’s AWS service and Gemalto to provide cloud-based, and physical ‘Security Modules’ that store the information to unlock customer data for its users.

For the more technical among you, here: 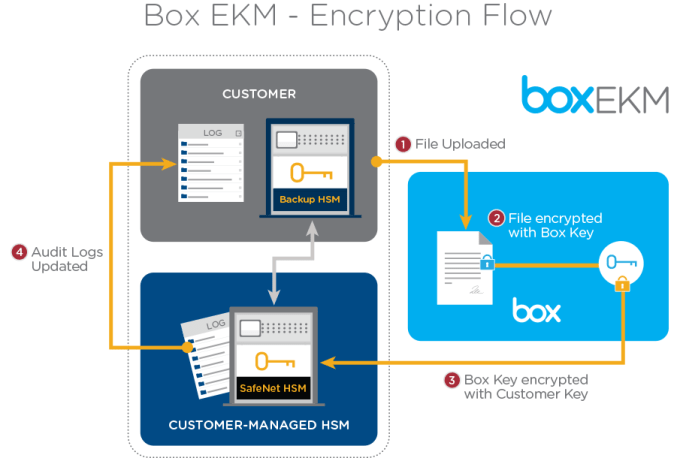 Box is a recently gone public company that is hungry to grow its revenue and differentiate its product from all the other storage-based products and services companies out there. In a phone call, Box’s CEO Aaron Levie described a number of industries and groups that cannot currently use cloud products because they couldn’t meet all pertinent security requirements. Box hopes that by providing a new security layer that even it cannot penetrate, it can bring those corporations and governments onto the cloud.

EKM will cost more than standard Box service. That will allow Box to upsell to its current client base — potentially boosting margins, annual contract value, and, of course, yearly net-positive revenue churn — and bring in new clients at higher price points.

Levie indicated to TechCrunch that no provider among its large competition — think Dropbox, OneDrive, etc — offers what EKM, now in beta, does. The tool took Box around 3 years to build, according to the CEO.

A question that I hear from some investors, and entrepreneurs alike, is how Box will ensure, over time, that its product is distinct enough from other cloud storage and collaboration services providers, given that its market is crowded with monied giants hungry for share. Provided that Box has a few more EKMs in the pipeline, I think that the answer is at least potentially clear.

We’ll be able to see how well the EKM product does for Box in the company’s future SEC filings. If it performs well, the company could make a note of it. When asked, Box declined to define the price of the product, noting that it will vary with each client. Presumably, Box will sell it on a per-seat basis like its other products.

Box has yet to schedule its first earnings report as a public company. The company has also stopped sharing the percentage of Fortune 500 companies that use its product internally at least a little bit as it was reaching 100 percent. Instead it shares the percentage of those firms that pay for its product, which was 48 percent as of the last report.

As a final note, there were some voices in the road to Box’s IPO who wondered what its research and development budget was being spent on. As it turns out, Box was willing to make a multi-year investment — of what size, precisely, we don’t know — into a product that wouldn’t make an impact until after its public offering. So, the company is willing to play a longer game than some anticipated.