AI-powered remote control car maker Anki today unveiled Anki Overdrive, the next generation of its play sets that lets kids (and the adults who inevitably have to play with them) create their own tracks from various tiles.

That’s a huge leap from the company’s original tracks, which consisted of static loops that you rolled out as a fabric mat. While perhaps not as easy to set up or put away, the new tracks mean you won’t be stuck racing on the same set path for months at a time until you pick up a new mat.

Overdrive arrives in September in the form of a new $150 starter kit that will include two new cars and 10 track pieces — enough to build 8 distinct race tracks. Each individual tile is a solid, glossy piece of plastic with magnets on each end that let you easily snap them together or take them apart.

In a demo at Anki’s San Francisco offices last week, we got a chance to try out the new version along with the update’s four new cars. It’s much more impressive to see the AI that drives each of the little racers adapt to changes made to a course’s layout or try to out-maneuver you when the course itself isn’t just a simple, predictable loop. Whether it’s learning to speed up to take a jump better the second time around or going into a turn at a smarter angler, it’s easier to see Anki’s cars as little thinking machines when there’s a bit more complexity involved. 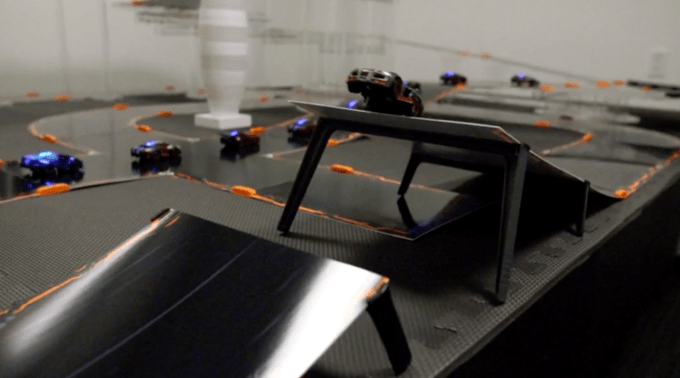 This car learned to speed up before a jump on its second lap on a new path on Anki’s massive track.

The cars each have a bit more style than the somewhat generic options in Anki’s first generation of racers. They vary enough in form and color that most groups will have a preference between them. Weapons fired from these new vehicles are animated via LEDs around the car that can blink at different speeds and in a variety of colors.

Anki Overdrive feels more like real-world Mario Kart than a simple RC race track with boundaries. Thanks to the new range of track options, there’s the feeling of having different levels in which to play. Anki is taking advantage of that by giving the characters introduced in a previous update to Anki Drive “favorite” levels (and cars). If you beat a character under their preferred conditions, you get more stars, again blending the concepts of playing video games and playing toys.